Canada's commercial real estate market continues to attract investors willing to outbid their rivals for stable assets, despite instability in global financial markets and uncertainty about the strength of the economic recovery.

Oxford Properties Group Inc. said Thursday it will buy the Metro Toronto Convention Centre complex from Canada Lands Company in a deal worth as much as $250-million. But it wasn't the price that was surprising – it was the number of potential buyers who were willing to spend that much for the property.

"The depth of debt available was somewhat surprising given the macro-economic environment," said John O'Bryan, vice-chairman of CB Richard Ellis, which helped market the properties.

"With the amount of liquidity that was present, we could have sold the asset several times over, which tells you investors still feel comfortable investing large blocks of capital into Canada," he said.

The deal, which is to close in September, will see Oxford buy the north building of the convention centre, along with the nearby InterContinental Hotel and an office building occupied by Royal Bank of Canada and the Canadian Security Intelligence Service. A covered parking garage with room for 1,200 vehicles is also part of the transaction.

The hotel and convention centre will continue to operate as usual, and Oxford said it has no immediate development plans for the site.

The convention complex was put on the market in the spring, and was marketed by CBRE and TD Securities Inc. Prospective buyers came from Canada and the United States, with many real estate investment trusts and private equity funds hoping to hive off certain buildings rather than buy the complete package.

Toronto has been a magnet for commercial property investors this year. In a quarterly survey just released, Chicago-based real estate brokerage Jones Lang LaSalle ranked the city as the third-most popular destination in the world for global investors with $2.7-billion in deals. New York was first with $6.3-billion, while London attracted $6-billion in investment.

With $5.1-billion in deals across the country, the quarter ended in June was the best for Canadian commercial real estate since the recession – activity tripled from the previous quarter.

"Funds are being more cautious with a focus on investing primarily at home and trusting experienced managers with their cross-border investments," said Arthur de Haast, who is in charge of the international capital group at Jones Lang LaSalle.

The convention centre complex was developed by CN Real Estate in 1983, but transferred to the arm's length federal agency, Canada Lands, when it was formed in 1995. The agency exists to dispose of surplus government properties, but it will hold properties for years before deciding the market is right to sell.

While Canada Lands has properties across the country, the Toronto complex was among its most high profile, behind only the CN Tower – the one property that vice-president of strategic acquisitions Gordon McIvor said is not for sale at any price.

"We felt it was a good time to put the convention centre on the market in the spring and we did see a wide range of bidders," he said. "It's an iconic asset that everyone knows about, and there aren't too many properties like it anywhere in Canada. Every type of buyer was well represented."

When Canada Lands sells a property, the money goes toward either buying new properties or financing development. Whatever is left at the end of each year is paid to the federal government as a special dividend. Last year, Canada Lands paid $8.5-million.

Oxford Properties is the real estate arm of Ontario Municipal Employees Retirement System, which is active across the country as well as in London and New York. Oxford owns several high-profile buildings in downtown Toronto, including the Royal Bank Plaza and TD Canada Trust Tower. It also owns three development sites, and is considering building a new tower on one of them in the near future.

"This is good real estate that we plan to improve over time, though the plans aren't quite there yet," said Oxford chief executive officer Blake Hutcheson, who recently announced plans for $150-million office tower in downtown Vancouver. "This is a good income stream and a long-term hold, but we are also excited about owning almost a mile of downtown Toronto." 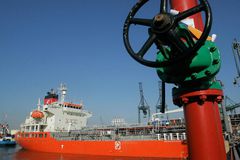