Daring, innovative pedestrian bridges are popping up across Canada, with Calgary and Toronto at the forefront of the growing trend to give new recognition to those who commute on foot or by bike.

Calgary's latest architectural sensation, the predominantly red Peace Bridge, opened on March 24. The steel and glass structure, which crosses the Bow River into Calgary's downtown, has attracted 4,400 citizens a day since it opened and become a focal point for residents and tourists.

"There was one fellow who set up a time-lapse camera and [and he recorded] 1,200 people in an hour on the weekend," says Calgary Alderman Druh Farrell, a vocal Peace Bridge supporter. "People are drawn to it: It's become a magnet."

But the 130-metre-long bridge was also long on public controversy. The $24.5-million cost was borne by the city, leaving some citizen groups and city politicians fuming, calling it a "vanity project."

"It was touted as a frill, and Calgary is a practical city," Ms. Farrell says. "It was the first visible investment for pedestrians and cyclists, and to many that is not seen as a legitimate transportation mode."

Other world capitals, though, are paying attention to improved passage for pedestrians. With their combination of functionality and aesthetics, both the Millennium Bridge that spans the Thames in London and the Passerelle Simone de Beauvoir that spans the Seine in Paris have gained worldwide attention from archi-tourists.

In Calgary, it was important that the bridge be aesthetically pleasing as well as practical, Ms. Farrell says. "Calgary does utilitarian very well, but Calgary's grown up and we deserve beautiful architecture."

The city hired Spanish architect Santiago Calatrava, who has created acclaimed bridges in Dublin, Buenos Aires and Seville. (He also designed the Allen Lambert Galleria, a six-story-high pedestrian thoroughfare in Toronto.) Jeremy Sturgess, a Calgary architect and proponent of the Peace Bridge, says he thinks the costs were warranted.

"We were part of the world architecture festival in Barcelona, and one of the bridge designers in describing his bridge for Brisbane got up and said, 'I only had $40-million to spend on my bridge but still I built something beautiful.' And that made me think we got a real bargain," he said.

Having a world-class architectural marvel will benefit the city as a whole, Mr. Sturgess adds. "People already are saying when visitors come, we better take you over to see the bridge."

Calgary is not the only Canadian city that has braved the storm of public criticism that can sometimes accompany pedestrian bridges. Winnipeg's Esplanade Riel was built in 2003 and the Fort Edmonton Footbridge opened in 2012, both designed by local architects.

In Toronto, the Puente de Luz, or Bridge of Light, is set to open this fall. The eye-catching yellow span crosses the busy downtown railway corridor between the new Concord CityPlace condo development and historic Front Street West.

Chilean artist Francisco Gazitua was hired to design it, but the City of Toronto avoided a public outcry over the cost – Concord Adex, the developer of CityPlace, is paying for it.

As City of Toronto planning manager Lynda Macdonald explains, plans for this bridge stretch back to the 1980s. When Canadian National Railway Co. expressed interest in selling the railway land, the city required that any new purchaser agree to a package of community benefits, including bridges and parkland. When Concord Adex bought the land, it inherited the requirement to build a pedestrian bridge (it has already completed the Canoe Landing park at the south end of the bridge).

Ms. Macdonald says development charges are one way to ensure that this kind of project is built in an era of shrinking public infrastructure spending.

To make the Puente de Luz bridge more than a utilitarian object, Concord Adex also used part of the public art spending that is required by the city – one per cent of all hard construction costs must go to public art projects that benefit a development's neighbourhood.

Gabriel Leung, director of development at Concord Adex, says the bridge will go a long way to benefit the people who live in the CityPlace community.

"There was some talk when CityPlace was being planned out that this could become a very isolated community and not linked with the rest of the city, and that's precisely why we want to put a lot of effort into the design of this bridge," he says. "It doesn't just serve a functional element of connecting people together, but it makes something poetic out of the bridge design, an attraction for the city itself."

Though Concord Adex declined to release final budget numbers for the bridge, Mr. Leung confirms that it was about "one third" of the cost of the Peace Bridge, which is slightly longer. (The span of Puente de Luz is 125 metres with two end ramps of 60 metres each.) Both cities are planning to build more pedestrian bridges; at Fort York in Toronto and at St. Patrick's Island in Calgary.

Toronto's yellow bridge was not without its challenges, though, says Karen Mills, Concord Adex's art consultant. In addition to applying for technical approvals from the city, the company had to work with railway companies concerned about maintaining proper sightlines for the rail lines.

"There are tremendous liabilities associated with things if you make a mistake, especially if you're building over the most active rail corridor in the country," she says. (Safety precautions include three-metre-high barriers of wire mesh that will keep pedestrians from throwing items onto the tracks.)

As well, there was the issue of the bridge's yellow colour – chosen so it stands out against a grey background.

"When we chose the paint and told the fabricators, they were ready to shoot me," Ms. Mills says. "Bridges are supposed to be black or maybe red, but they're not this yellow colour. Everybody hated it."

"[But]we slogged through all the criticism with the goal in mind that, number one, we were going to build something that served the functional purpose that we were required to do, but secondly, [we were]going to take advantage of an opportunity to create a new kind of social space." 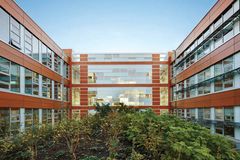 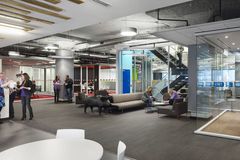 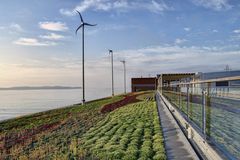 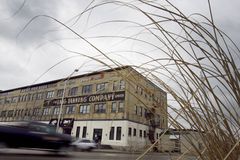