The top four floors of the cross-shaped Place Ville Marie in Montreal are being renovated to open them to the public with an observation deck. (Ivanhoé Cambridge)

From the 46th floor of Place Ville Marie’s cross-shaped main tower, you can see how the building’s owner, Ivanhoé Cambridge, plans to make the massive complex feel more like a public space.

Construction workers mill about, prepping the empty floor to become a world-class tribute to Montreal. When it’s done, it will be an observation deck with sweeping views of the city – the skyscrapers, the mountain, the St. Lawrence River, the Big O – unadulterated from such great heights. A glimpse below, meanwhile, reveals a new street-level local market in the public square next door, slowly filling with lunchtime shoppers.

In 2013, Ivanhoé Cambridge bought the 50 per cent of the four-building-plus-mall complex it didn’t own from Alberta’s AIMCo for more than $400-million, and has since sunk an additional $100-million into it. By the end of 2014, Place Ville Marie became the largest existing complex in Canada to be certified LEED Silver for operations and maintenance. 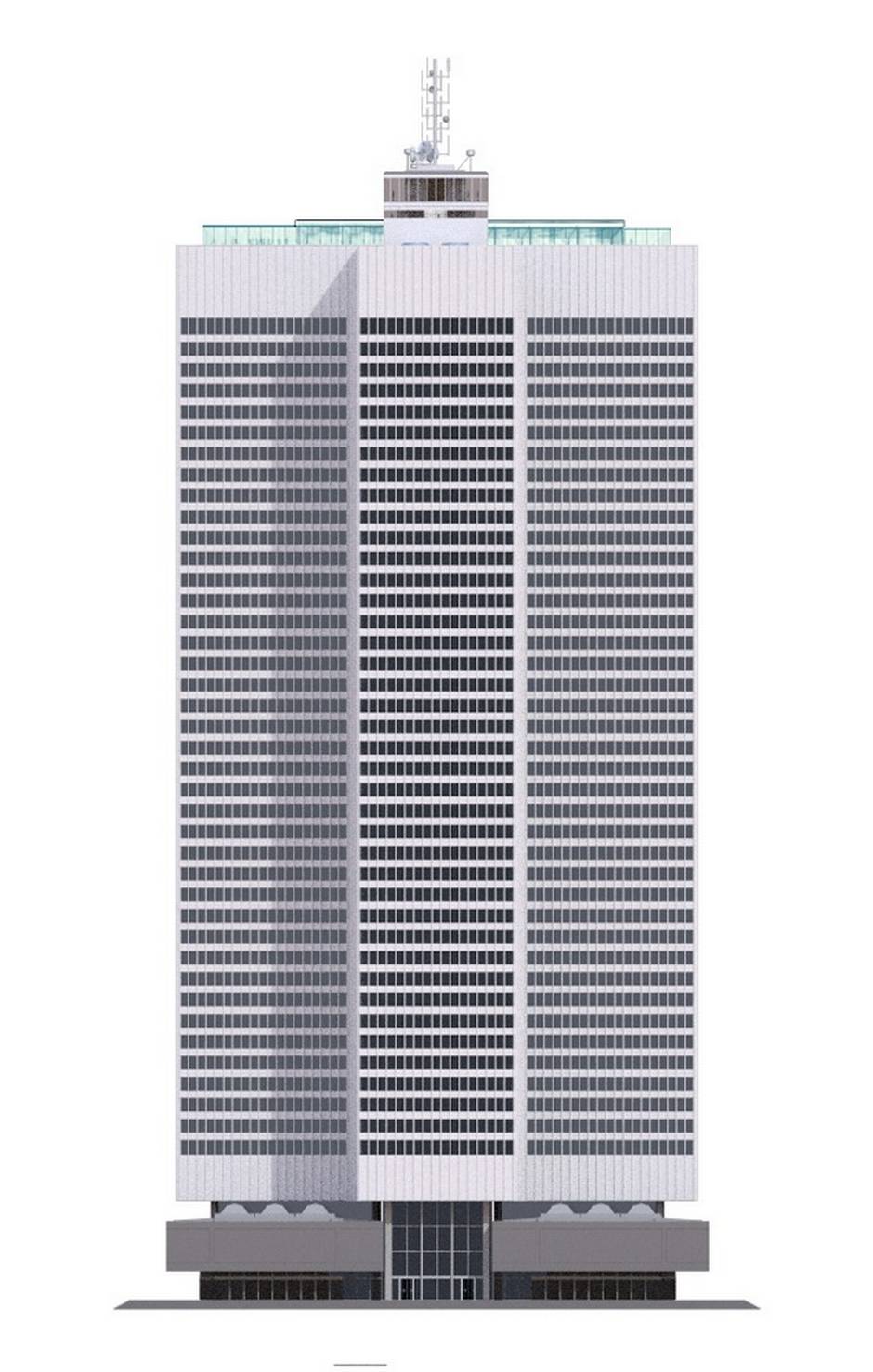 More visible than infrastructure investments, though, are Ivanhoé Cambridge’s efforts to frame the building as a crucial thread in Montreal’s civic fabric. The weekly local-sourced food market, in Place Ville Marie’s neighbouring square, the Esplanade, is a major component of the landlord’s plan to keep the complex in the public eye. So, too, is the high-tech public observatory being built on the top floors.

“We are fundamentally, profoundly Montrealists; we believe in downtown Montreal,” says Claude Sirois, Ivanhoé Cambridge’s co-chief operating officer and executive vice-president for Quebec, sitting in the Esplanade on the public market’s opening day in early June.

“Every important city in the world has a strong commercial heart.”

Ivanhoé Cambridge is investing in history to distinguish itself in an office market where demand is falling below supply. With Place Ville Marie as its crown jewel, the landlord is in the midst of a $1-billion investment program in the city, hoping to affirm its dominance in Montreal’s core.

“We have all the tools, the experience, the expertise, the capital to make a difference in downtown Montreal,” Mr. Sirois says.

Ivanhoé Cambridge – the city’s second-biggest office property manager, according to Altus InSite data provided by Colliers – has a reputation for looking toward the long-term with their property investments, he says. Keeping PVM a Class-A complex mindful of contemporary tenant needs fits with that trend. About 20 per cent of the central tower is vacant, Mr. Beauchemin says, giving the owners a chance to upgrade empty floors. “Even though it’s not the most dynamic market right now, their eyes are set on the future.”

For a short while after it opened in 1962, the “Grande Dame of Montreal” was the highest skyscraper in the Commonwealth – largely thanks to stubborn competition. Less than a year before opening, upon hearing that its forthcoming neighbour, La Tour CIBC, would be one floor higher, PVM’s developer William Zeckendorf ordered builders to add an additional three floors.

Ivanhoé Cambridge, then named SITQ, bought its original stake in the 3,384,000-square-foot complex in 2000. As the real-estate wing of Quebec’s public pension manager, Caisse de dépôt et placement du Québec, it has deep roots in Montreal, with 8.3 million square feet of office and retail space in the city. 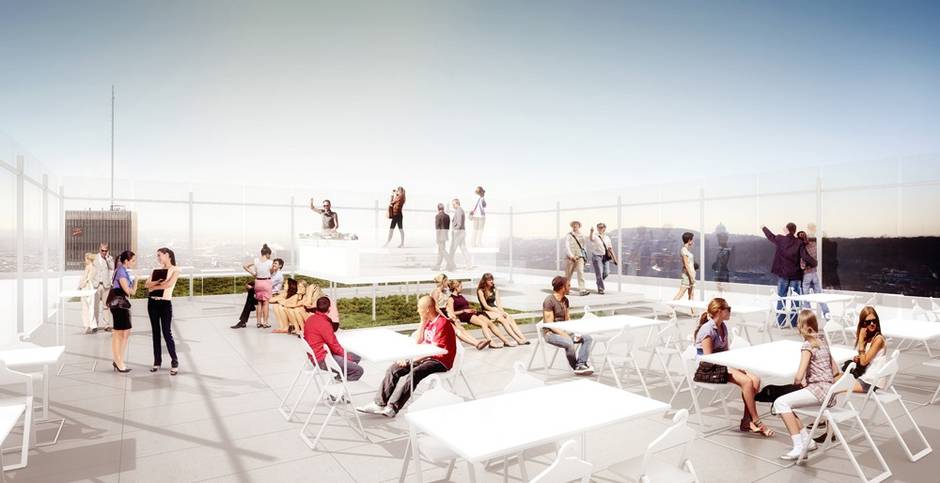 Visitors will arrive on the tower’s 43rd floor from the complex’s shopping gallery. The 44th floor will feature a pair of open terraces on the cross arms of 1 Place Ville Marie. (Ivanhoé Cambridge)

Fifteen per cent of its $42-billion global portfolio is in the province; the 2013 purchase of the remainder of PVM from AIMCo was a move to deepen those roots.

Much of the subsequent $100-million of PVM investment is invisible, Mr. Sirois says – infrastructure changes to make the building more sustainable. (Some of this work, Colliers’s Mr. Beauchemin says, is related to asbestos removal.) The look and feel will largely remain the same – “we have an obligation to replicate what was originally there,” Mr. Sirois says. But the landlord has attempted to make the building dramatically more efficient in the past two years, earning it LEED Silver certification.

“What we’re trying to do with Place Ville Marie is give a sense of what Montreal is like as seen by a Montrealer – people who would die for Montreal.”
Alexandre Taillefer, entrepreneur, TV Dragon

“It’s good to see that these complexes are getting updated rather than demolished,” says Thomas Mueller, chief executive of the Canada Green Building Council, which administers LEED certifications. He says the chase for better sustainability and performance is becoming the norm for commercial property owners in Canada, even when there may be cheaper, less historically minded, options available.

The top four floors of the tower are in the midst of their own massive transformation. Montreal’s gsmprjct – the firm that designed the Metro’s iconic blue arrow logo and subway cars – is working with a consortium including Ivanhoé Cambridge, creative firm Sid Lee, Cirque du Soleil, and investment firm Claridge to design a $14-million observation deck that will open the top of the historic building to the public.

The space, which used to house the infamous – and less family-oriented – Altitude Club 737, will become a tribute to the city’s culture. “What we’re trying to do with Place Ville Marie is give a sense of what Montreal is like as seen by a Montrealer – people who would die for Montreal,” says Alexandre Taillefer, an entrepreneur, a TV Dragon, and managing partner of XPND capital, an investor in gsmprjct. 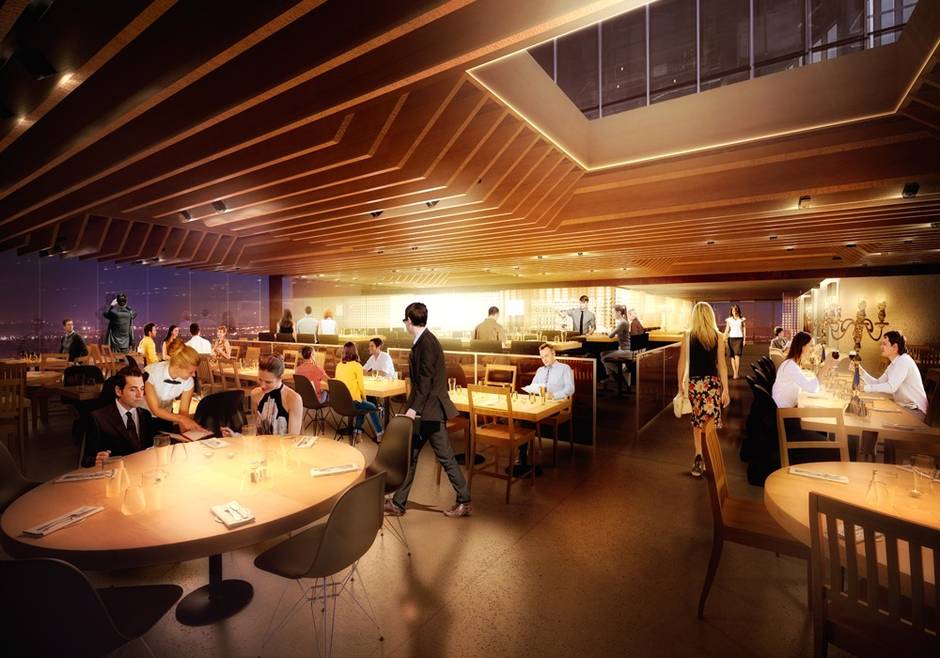 The Les Enfants Terribles restaurant to open on PVM 1’s 44th floor in early 2016 won’t be high-end, in spite of its height. Instead, it will offer Montreal-inspired delicacies of all kinds. (Ivanhoé Cambridge)

The company has designed some of the world’s most well-known observation decks, including at The Shard in London and the Burj Khalifa in Dubai. Tickets to PVM’s obervatory are expected to average about $15 – half the price of the cheapest ticket up the Empire State Building.

Visitors will arrive on the tower’s 43rd floor from the complex’s shopping gallery. The 44th floor will feature open terraces, and a Les Enfants Terribles restaurant that will serve local delicacies, without high-end prices, to entice more locals to venture up.

The 45th floor will offer an “immersive experience,” Mr. Taillefer says, with touchscreens that will show “what’s making Montreal’s heart beat” – food, culture, art, told from the perspective of Montrealers.

The top floor will be dedicated to the view – the mountain, the river, the surrounding cityscape. “It’s going to be something that people will be very proud of,” he says.

How Place Ville Marie adds up

8 metres: Difference in height between PVM 1’s roof and the peak of Mont Royal.