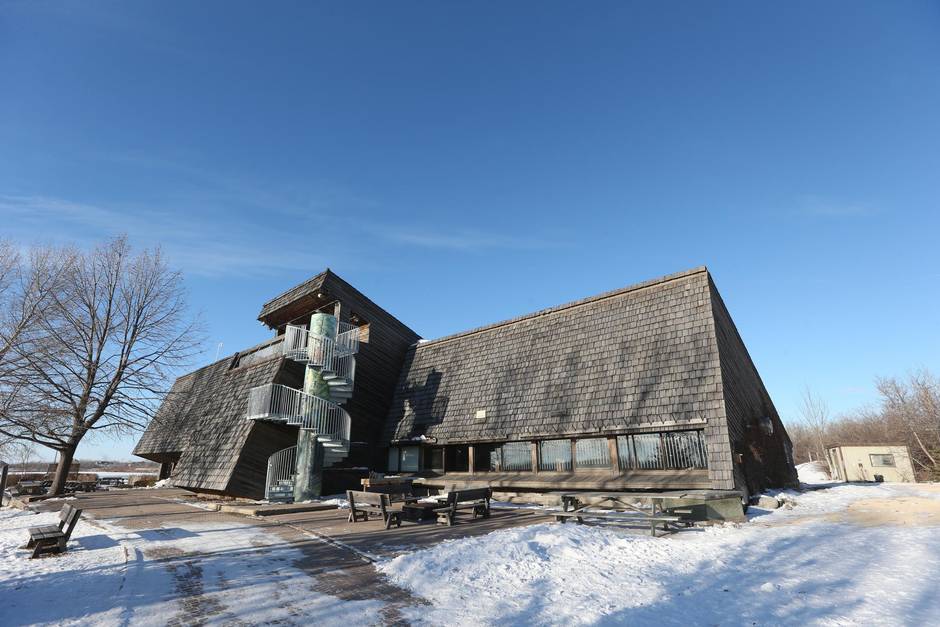 The FortWhyte centre in Winnipeg is undergoing energy efficiency testing by experts at Red River College. (John Woods for The Globe and Mail)

At FortWhyte Alive, squirrels are frequent stowaways on its “mother ship.”

“I often jokingly explain we have as many squirrels working in the building as we do staff,” says Bill Elliott, president of the environmental education facility in Winnipeg.

For the most part, the puffy-tailed rodents go unnoticed in FortWhyte’s interpretive centre, referred to affectionately by staff as the mother ship.

Yet recently on an unusually mild afternoon, a team of experts from Red River College in the city, using infrared technology, reveal the squirrels’ negative impact on the building’s energy efficiency. 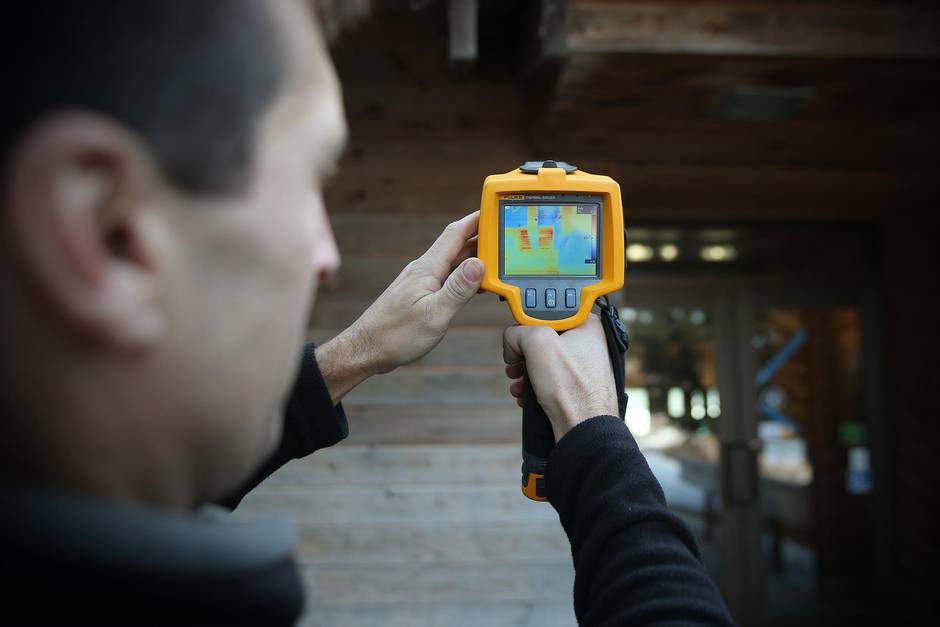 Rob Spewak of Red River College's Building Envelope Technology Access Centre uses an infrared detector to find holes that let air pass in and out of FortWhyte. (John Woods for The Globe and Mail)

He and his colleagues gather around the device’s monitor looking at a large blue blob indicating cold air pouring into the building.

The infrared imaging test only hints at the extent of the building’s problems – ones that affect many other commercial structures across Canada.

Squirrel-related destruction aside, the test’s main event – involving powerful blower door fans and smoke machines – has yet to get under way.

Using industrial fans filling a doorway to the outside to suck in air, pressurizing the building, smoke machines then fill the interior with smoke or fog. Afterward it’s a matter of measuring the changes in air pressure as well as observing where the fog escapes to the outside – through cracks around windows, electrical outlets and, yes, damage inflicted by burrowing squirrels. 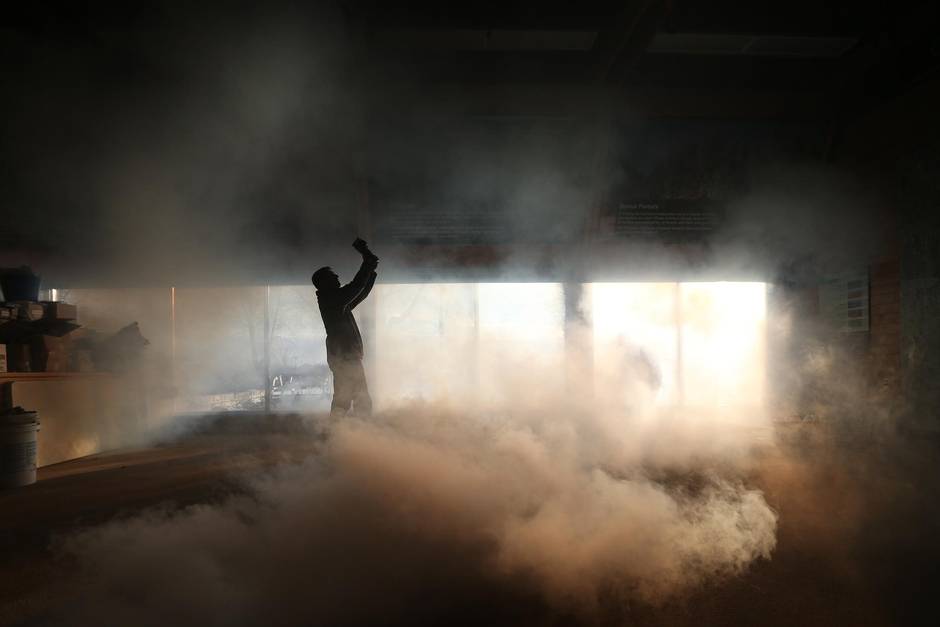 Much of the testing includes filling rooms with a fog, then blowing it around to see where it escapes. (John Woods for The Globe and Mail)

As governments become increasingly focused on climate change, especially in the wake of the historic agreement in Paris late last year, BETAC’s work represents the start of an energy efficiency revolution in commercial real estate.

Their focus on building envelopes – the barrier between the interior and exterior – aims to make air leakage testing as commonplace for commercial and institutional buildings as it is for homes across Canada.

“In residential buildings, air leakage standards have been well defined and tens of thousands of air tightness tests have been done across the country,” says Harry Schroeder, an engineer with Manitoba Hydro, the province’s utility provider, which partly funds BETAC’s work.

“Yet in the commercial sector, very little emphasis has been placed on air tightness in buildings.”

Energy loss through a leaky building envelope is an age-old problem. For the most part, however, it was more a concern of keeping a building warm, says Kevin Knight with BETAC. 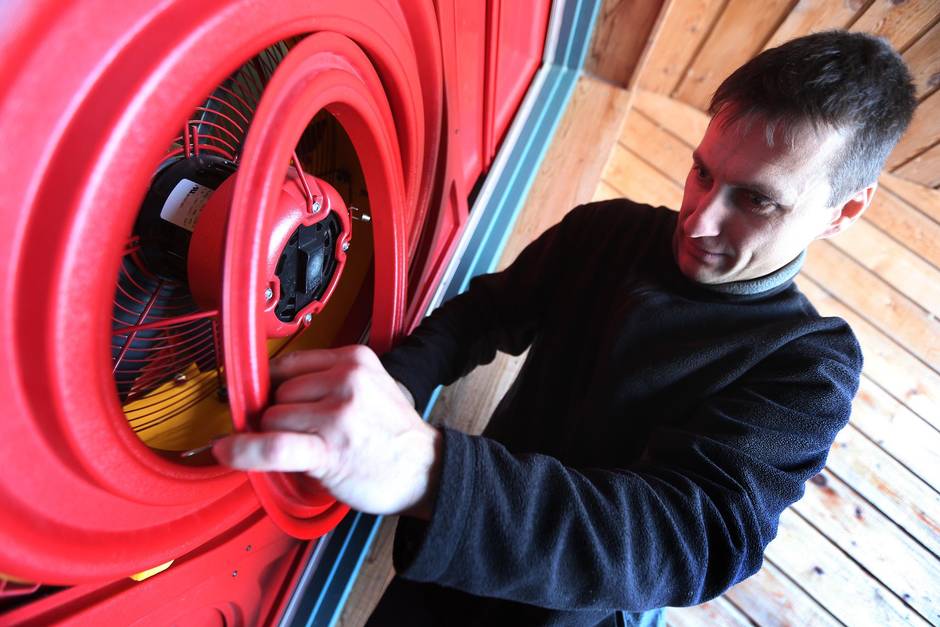 Rob Spewak of BETAC adjusts the range on the blower fans, which change the pressure values inside FortWhyte. Pressure changes are used to test building energy efficiency. (John Woods for the Globe and Mail)

That began to shift in the early 1950s when its potential impact on energy loss was quantified for the first time. Neil Hutcheon, one of the pioneers in building science (including the study of building envelopes), found between 15 and 35 per cent of a building’s energy use is lost via air leakage, Mr. Knight says.

Nonetheless industry was slow to react, and even today no standards exist for commercial structures.

Envelope tests, like the one at FortWhyte, help guide owners in energy retrofits, but BETAC’s work will also help establish those long-awaited standards.

“We’re trying to build a database that is as large as possible, because while we’ve tested more buildings than anybody else, we’ve just scratched the surface,” says Gary Proskiw, a contractor with BETAC.

A report by the federal Office of Energy Efficiency points to how much is potentially at stake. Its 2013 study found commercial and institutional buildings account for 12 per cent of Canada’s secondary energy use and 11 per cent of greenhouse gas emissions.

Given a 2006 U.S. Department of Energy study revealed as much as 40 per cent of buildings’ energy is lost to leakage, retrofitting leaky building envelopes can have a significant impact mitigating climate change, Mr. Knight says. 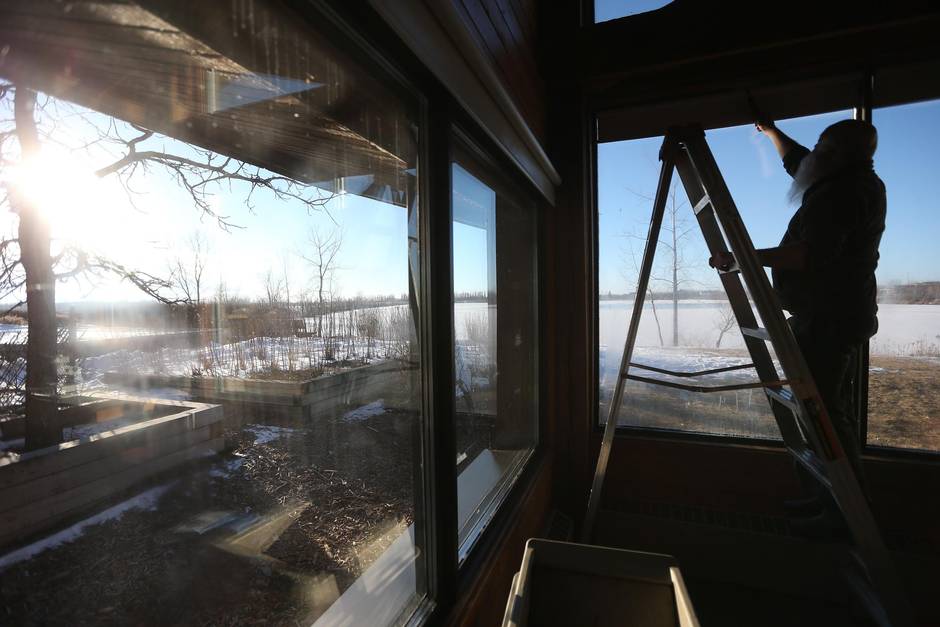 Research and technical professional Kevin Knight uses smoke to do air leakage tests around windows at FortWhyte. (John Woods for The Globe and Mail)

“There are two ways of addressing climate change: One is finding greener, alternative energy,” he says. “The other is reducing demand, and increasing building envelope efficiency can have a huge impact on demand.”

Yet the tests serve another purpose: improving building durability.

“When you have air moving through a building envelope, it takes with it moisture – basically the root of all evil for buildings,” Mr. Proskiw says. “But it’s not just water; it’s water freezing in the walls in the winter.”

“You end up with a situation where you have a 1,000-pound piece of the wall held together by steel connectors that are rusting apart, and at some point they let go.” 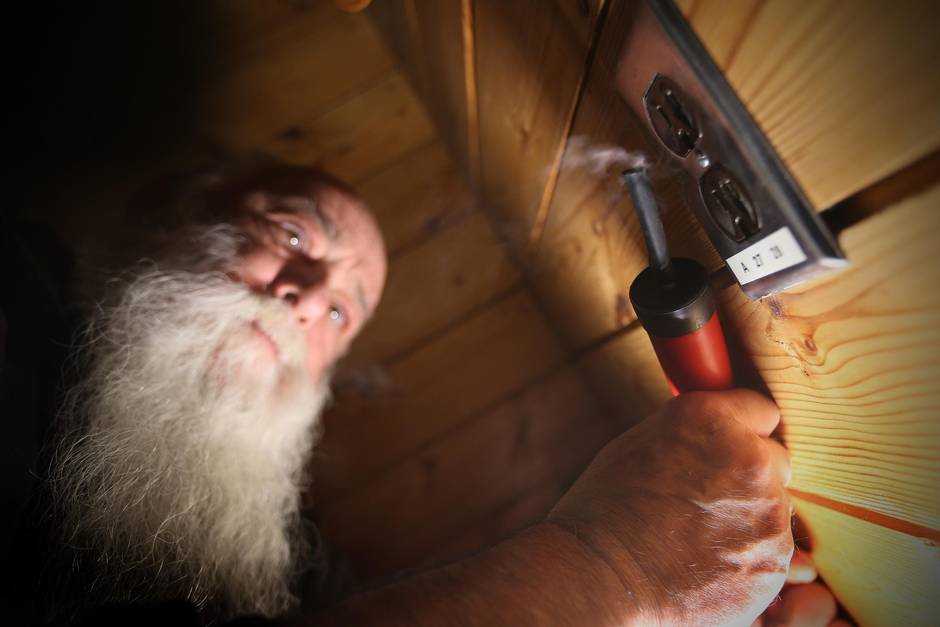 Even the space around electrical outlets can be sources of energy loss, as research technologist Kevin Knight finds. (John Woods for The Globe and Mail)

Winnipeg alone has several high-profile examples of buildings with outer shells that are at risk of shedding slabs from high above: the Winnipeg Art Gallery, the RBC Convention Centre and even its Public Safety Building (the soon-to-be decommissioned old police headquarters).

And the problem is widespread – a global issue – and a costly one at that, Mr. Proskiw says. “We figure there’s probably a few hundred million dollars of damage just here in Manitoba.”

So far the province has been at the forefront of envelope remediation, thanks to the efforts of BETAC, whose work will help develop the new National Energy Code of Canada for Buildings.

For the time being, however, its tests will help conscientious owners to cut energy use and improve the longevity of their property, including FortWhyte and its interpretive centre.

“You have to know what your problems are before you can fix them,” Mr. Elliott says, adding the test will guide an estimated $1-million retrofit. “I really think the test will soon become step one for owners concerned about energy efficiency and extending the life of their buildings.”

How the tests work

Using high-tech equipment that monitors barometric pressure inside and outside a building, air leakage testing is fairly simple in concept to understand, says Mr. Spewak with BETAC.

“Whether pushing air out or in, the change in air pressure has to be compensated for from somewhere – usually through cracks in the building’s outer walls,” says Mr. Spewak, manager of the college’s Building Envelope Technology Access Centre (BETAC).

“We’ll measure different points of depressurization and pressurization using monitoring equipment and a laptop, and then run some complex calculations to come up with an average figure of basically how leaky the building is.”

So far, BETAC has tested 34 buildings across Manitoba (about a third of all such tests done in Canada), including churches, public housing apartments, schools, warehouses and industrial buildings. The most airtight building to date was a new middle school in Steinbach, Man., which was 18 times less leaky than the least-efficient building envelope of an old warehouse.