The gravel patch nestled in a bend of the Saint-Charles River along Rue de la Pointe-aux-Lièvres is not particularly remarkable. The construction office parked there on a rainy summer day, though, offers a sign of what's to come at the site, a 10-minute drive from Old Quebec. It's plastered with renderings of a 13-storey red-and-white condo tower proposed for that very spot.

Those renderings conceal a secret. Beneath the colourful aluminum cladding, the top 12 storeys of the proposed tower will be made almost entirely of cross-laminated timber, which would make it the tallest modern wooden tower in North America.

Called Origine, and to be built by Quebec-based Nordic Structures, the tower is slated to be 41 metres tall – 39 per cent taller than the Wood Innovation and Design Centre in Prince George, B.C., currently the tallest wood building on the continent. Nordic plans to break ground before winter, pending unit sales and final construction-board approvals.

The understated tower is a grand bet on an otherwise underused building material, and Quebec, whose economy leans on the forestry industry, is a perfect place to build it. The notion of structural wood comes with a natural set of fears from the uninformed – particularly surrounding fire safety. But with Origine, the team at Nordic hope to blow away the skeptics and draw heaps of attention to high-rise mass timber construction in their wood-rich province.

"When the construction starts, there'll be a lot of people around, looking to see how we did it," says André Huot, Nordic's business development manager.

Seated in the construction office, surrounded by more renderings, Mr. Huot gestures to a sample slab of the material: cross-laminated timber, or CLT. Five rows of lumber are stacked and glued perpendicular to each other, with no gaps in between. The material, made of 90 per cent black spruce, is also available in three- and seven-ply designs for varying needs.

Nordic is one of the biggest CLT manufacturers in Canada. The material, in various plies, can be used to make prefabricated wall panels and floor and roof slabs. This helps speed along construction: The building is expected to take 14 months to complete, Mr. Huot says – half a year less than it'd take for a similar-sized concrete building to rise from the ground.

More intriguing than that is the safety of the structure – particularly how it's expected to behave in the face of fire.

Various Canadian jurisdictions have begun permitting mid-rise wood structures as tall as six storeys to be built. The Régie du bâtiment du Québec's construction code generally permits building up to six storeys – but, when Nordic approached them about building 13 storeys, they were willing to consider it.

"Safety is the most important thing," says RBQ spokeswoman Marie-Claude Masson. "They were asked to demonstrate that a 13-storey building is as safe as a six-storey building." On top of noise and building envelope tests, fire safety was the top concern. (Nordic and the RBQ have only a tentative agreement to proceed so far; the building board is waiting on some final safety documentation.)

To prove their CLT building would be structurally safe in a fire, Nordic headed to the National Research Council in Ottawa for a series of tests – armed with grants from both the Quebec and federal governments, since they were laying the groundwork for future sustainable wood buildings.

In a fire-resistance test, Nordic's team built a mockup of a wall and floor inside an NRC furnace, with the weight of 11 storeys applied on top to give a sense of how the lowest floors would behave when exposed to fire. The Origine mockup's walls and floors resisted fire for 31/2 hours at 1,200 degrees Celsius – far longer than the required two hours.

A second test, last November, was more of a demonstration. Fire safety officials from across Canada studied a blaze in a one-storey room attached to a three-storey mockup of Origine's wooden vertical stair-and-elevator shafts. In spite of a full-scale blaze in the room, "there was no detectable increase in temperature or smoke in the vertical shaft," says Cameron McCartney, a construction fire-safety research officer with the NRC.

Wood is the most common combustible material that comes to mind when people think of fires. So what gives? The answer is, in part, because of nature's resilience.

"The natural chemical reaction in wood, when exposed to high temperatures, is to start putting off some gases, and those gases cause the wood to char," Mr. McCartney says. "The char actually becomes kind of like a foam, so it also becomes a good thermal insulator."

In other words, wood – once a living plant – activates a kind of defence mechanism in the face of fire. And when stacked together in thick, tight blocks of CLT, the structural wood is protected by this char layer, which takes time to shed. "The wood protects itself," Mr. Huot says.

CLT's fire resistance is well known among its boosters, but getting public traction has been more difficult, says Shane Williamson, a partner at Williamson Chong, an architecture practice that has studied emerging wood technologies. "Although there's a lot of evidence about the fire rating for these products, it's still just something that is unsettling," he says.

There are still a few concessions in building so high with wood: Origine's structural wood must be covered, on the interior with drywall and on the exterior with aluminum, as a preventative safety measure. And there is a bit of concrete, too, both for the building's one-storey podium and units' heated floors.

Building with wood has numerous benefits, including its weight. Nordic estimates that the Origine tower will be 45 per cent lighter than a similar-sized concrete building – a crucial factor when building along the soggy Saint-Charles riverbed. "The land here cannot sustain the weight of a 12-storey building in concrete," Mr. Huot says.

The material is also a good fit for Pointe-aux-Lièvres, which Quebec City has designated an "eco-district." Wood is a renewable resource, and sequesters rather than emits carbon. And CLT has no thermal bridges, or gaps through which heat can transfer – meaning it performs well as an insulator. "The energy costs are about 60 per cent of a standard building," says Yvan Blouin, Origine's architect.

He's happy to be a part of such a large wood project, and for what's next. While builders will keep trying to go higher with wood – plans are brewing for a 24-storey tower in Vienna, and the University of British Columbia wants to build a wood-structured residence at least 16 storeys high – Origine will still set an example across the continent. "It's a pleasure for the office and for the architecture profession," Mr. Blouin says, "but we want to do other buildings like that for other people."

Companies such as Nordic Structures regularly approach the National Research Council with new building proposals. Here are three different types of tests the NRC can perform. 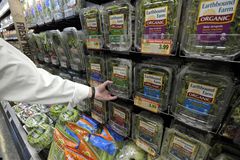 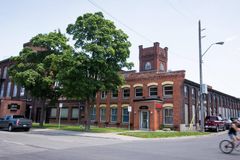 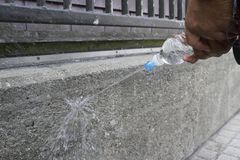 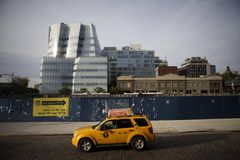