It’s almost 2:30 p.m. on a recent Wednesday here and Riviera on Sparks Street, the newest restaurant from two of Ottawa’s hottest chefs, Matthew Carmichael and Jordan Holley, is still fairly full with lunch-time diners. There are suit-and-tie folks, but there are also two men in T-shirts, one wearing his hat backward, sitting at the 18-metre-long bar.

The music, some late-1970s rock, is detectable but not loud. The bartenders are wearing flat-brim caps, and the whole place smells ever so slightly like the grill over which “Le Big Matt” – a double-cheeseburger on the lunch menu – is cooked to order.

The mix of executives and hipsters is not just an indication of Riviera’s varied clientele. It’s also a reflection of the new Sparks Street – the five-block pedestrian mall which starts at the foot of the National War Memorial to the east, and finishes near the Department of Justice Canada building to the west – as it begins to wake up from a sleepy history.

“Our biggest thing is that people can’t believe this is Ottawa,” says Mr. Carmichael, who, along with his partners, operates two other successful restaurants in Ottawa: Datsun and El Camino, the latter of which appeared in Air Canada’s enRoute magazine as one of the country’s best new restaurants in 2014. 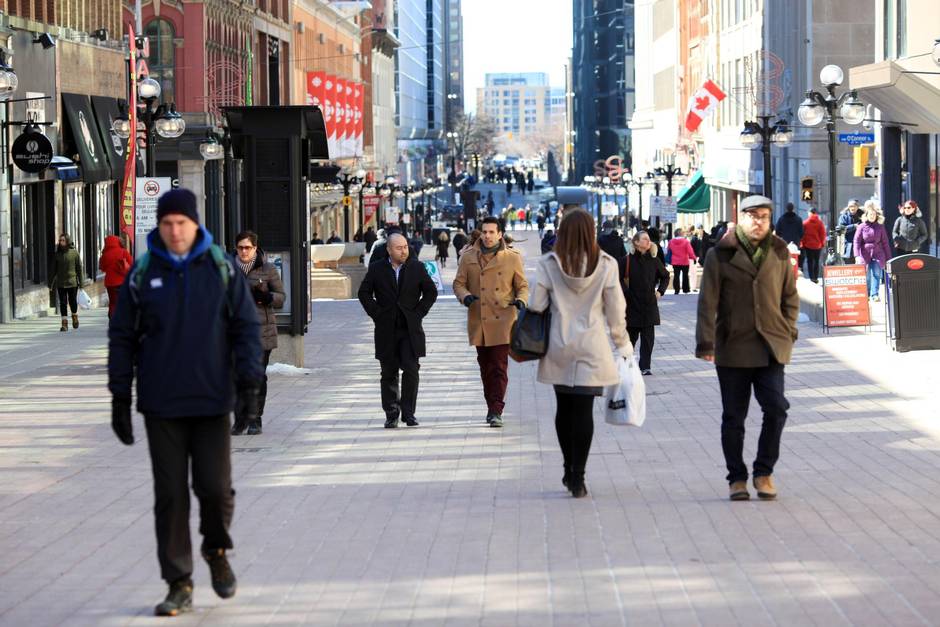 “It’s a great compliment to be compared to some of the great, big cities, but this,” he says, pointing to the bar that takes up the length of the restaurant and to the room’s 14-metre-high ceilings, “is Ottawa.”

Riviera, which opened in 2016, is just one of the many signs of promise on the changing Sparks Street these days.

More of the evolution will come to fruition as early as 2018, as Ashcroft Homes’s reResidences project is completed (“I catered the Ashcroft party almost 10 years ago. I’m not sure what the holdup was, but I can’t wait to have residential on this street,” says a smiling Mr. Carmichael.) There are no residential buildings on the 762-metre-long Sparks Street, a factor that has hindered businesses during after-work hours in the past.

“This will definitely bring a revitalization to Sparks Street. Once you have people living amongst businesses, the businesses can do nothing but thrive,” says Christia Zachariou, Ashcroft’s director of sales and marketing. 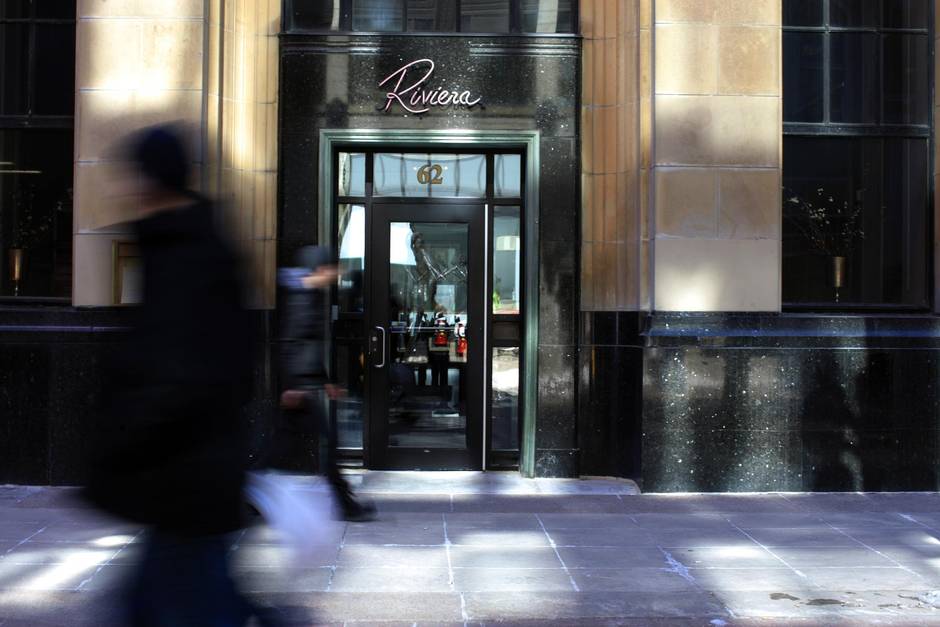 The new Riviera restaurant on Sparks Street in downtown Ottawa is located in a former bank. ‘It’s amazing to enter this food hall, and then to leave it,’ says co-owner Matthew Carmichael. ‘… It’s just romantic. It’s gorgeous. It’s Ottawa. And I love that about this location.’ (Dave Chan/The Globe and Mail)

Consisting of 91 condo units and 110 luxury rental suites, reResidences will feature an 18-storey tower fronting on nearby Queen Street and a six-storey tower on Sparks Street itself. Ms. Zachariou confirms the reResidences project is more than 60-per-cent sold.

“It’s not just an avenue to go to work any more, or have a beer. It’s an evolving spot,” Mr. Carmichael says of Sparks Street. “There’s a huge development happening, and I love it.”

City councillor Catherine McKenney says the reResidences project, among others, will make one of Ottawa’s most well-known areas come alive.

“We have a lot of people in the downtown and it’s full of life. The challenge with Sparks Street is keeping it that way on evenings and weekends. It’s got new businesses that bring people out to the street,” says Ms. McKenney. 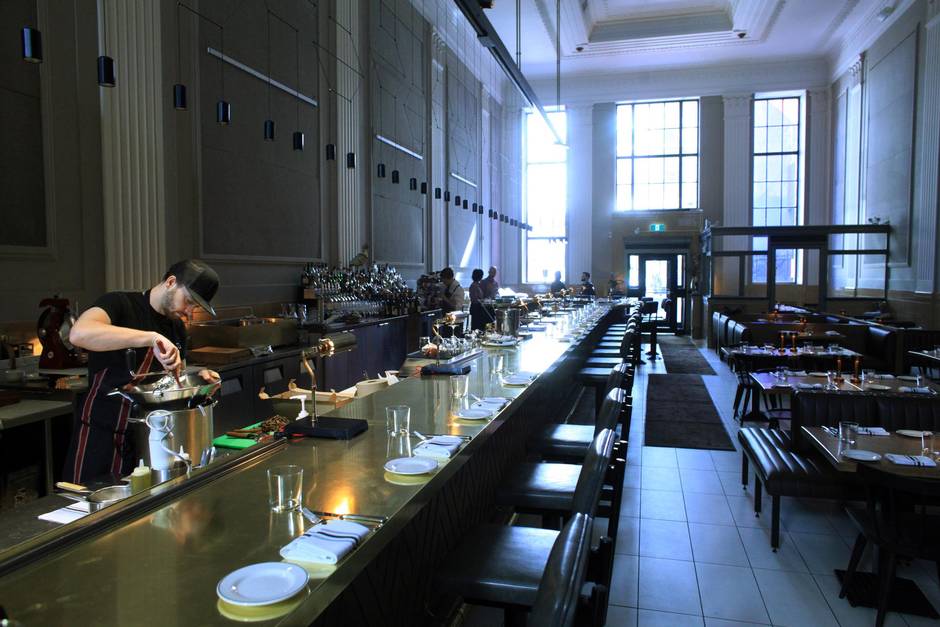 The Riviera’s 18-metre-long bar and 14-metre-high ceilings are among its striking design features. (Dave Chan/The Globe and Mail)

“Without residences close by [currently], it’s difficult to keep it animated and keep people down there. But Sparks Street is perfectly located to take advantage of its location. It’s right in the heart of downtown.”

Ms. McKenney calls Riviera a “smart venture” and points to it as being a key place that will bring more people to the revitalized area.

“They know what they’re doing. They’re going to have that captive clientele,” she says of Mr. Carmichael and his partners. “We don’t have as many people as we should [on Sparks Street] on evenings and weekends, but when you have a destination, people will go there, and that helps the street.”

On Sparks Street at the moment, there is a mix of boutique shops and other restaurants. Some of those businesses have Ottawa roots, but others are imports, such as Toronto’s Bier Markt and Montreal’s Les 3 Brasseurs (Three Brewers). 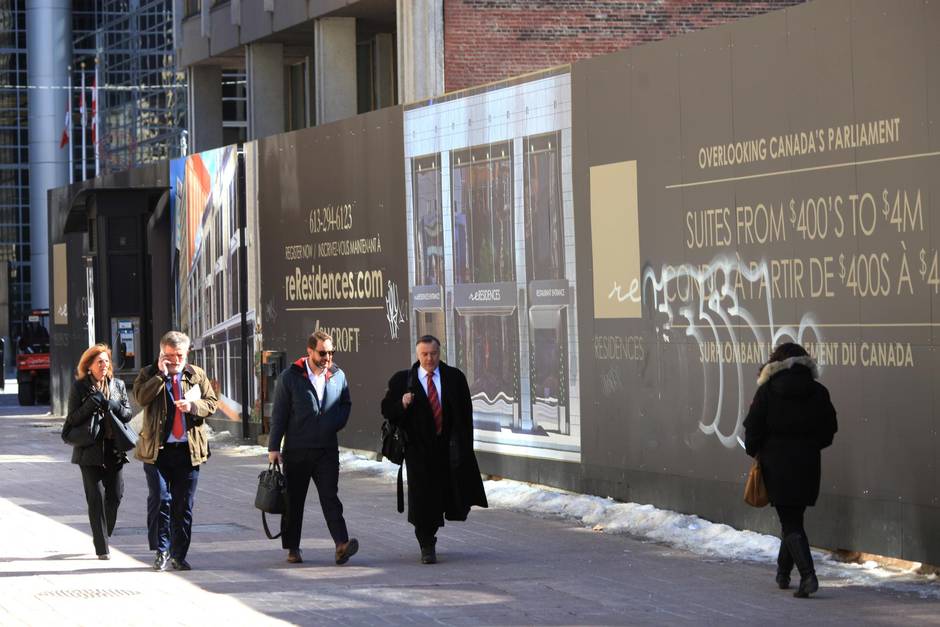 Ms. Zachariou says some businesses have closed over the past couple of years, but new ones are coming in that will cater to residents more than the business-hours-only crowd. She adds Ashcroft Homes has received letters of intent from several businesses – from both in and outside Ottawa – that want to be part of reResidences’s retail segment, which will have more than 20,000 square feet in total space, plus another 6,000 for a restaurant.

Thanks to a spot like Riviera, combined with the robust celebrations planned for Canada’s 150th anniversary this year, it’s a time of optimism, according to Kevin McHale, the acting executive director of the Sparks Street Business Improvement Area.

“It’s a spot where we can finally see around the corner from a lot of struggles we’ve had in the past five or 10 years. It’s gone through multiple transformations,” he says. “The way people shop has changed, and we’re not that primary shopping destination any more. We’ve had a lot of short-term pains, but hopefully it’s for long-term gains.”

Mr. McHale says there are federal government projects being worked on (compared with previous years when they were on hold) in both new and renovated offices. He points to these projects, which include Bank of Canada at 234 Wellington St. (entrance on Sparks) and the federal government’s reoccupying of 180 Wellington St. (another building with its main entrance on Sparks), as another reason for excitement. 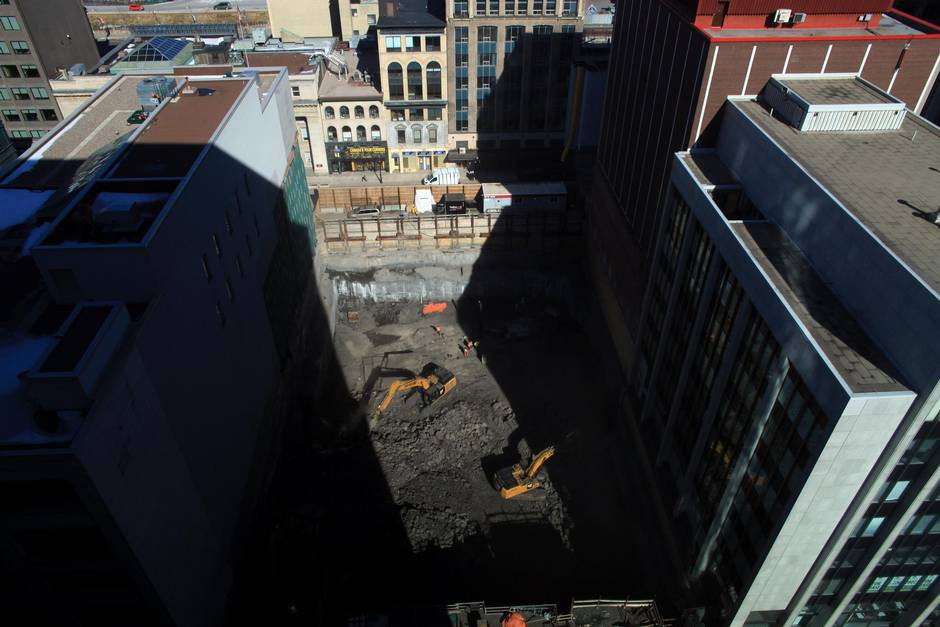 An overview of construction at the reResidences project, which is expected to come to fruition in 2018 or so. (Dave Chan/The Globe and Mail)

“For us, it’s about trying to change people’s mentality about what Sparks Street is,” he says.

And at Riviera, that change is happening in real time.

Mr. Carmichael, a long-time Ottawa resident, admits he had concerns about the foot traffic of Sparks Street before settling on the eventual location for the new restaurant. But the building, which used to be a bank, and later a stamp retailer, was too good to pass up with its art-deco interior and grandiose structure.

The award-winning chef was inspired by the European-style dining of Montreal, and wanted to bring that vibe to the nation’s capital in terms of both the food served and the setting.

He casually mentions Riviera’s general manager is “very close to Sophie and Justin,” referring to the Prime Minister and his wife, and they have been known to frequent Riviera since it opened about six months ago. But that’s not to say the backward-hat lunchtime crowd wouldn’t feel just as at home as they nosh.

“I’ve always loved Sparks Street, and there are a lot of people saying the same thing,” says Mr. Carmichael. “I love when people leave or come [to the restaurant] in the early evening, and it’s dusk and they go out in the middle of this beautiful area. It’s amazing to enter this food hall, and then to leave it. … It’s just romantic. It’s gorgeous. It’s Ottawa. And I love that about this location.”