The first thing anyone tells you when you visit Saint John these days is how much there is to do now in its historic uptown.

Keen developers and entrepreneurs are investing in its once-weathered core. In a single jaunt, you can visit an olive oil boutique, dine at a brand-new Italian restaurant, and grab a drink from a whisky bar, wine bar, arcade-themed bar or craft beer general store.

The second thing Saint Johners will tell you is their uptown Starbucks is gone. Its Brunswick Square Shopping Centre location, a few steps from the nightlife and boutiques, closed last November. Over the December holidays, in fact, visitors dropping by the central mall might have noticed a dozen of its storefronts were shuttered – about a fifth of available spaces.

The three-level mall is attached to Saint John’s tallest office tower and is at the heart of Atlantic Canada’s longest indoor climate-controlled pedway. In the past few years, local and national tenants have left Brunswick Square, leaving a growing hole in a core trying to reframe itself as a thriving beacon of East Coast urban sensibility.

With retail softening since the recession and shoppers increasingly likely to frequent car-centric power centres and online retailers, brick-and-mortar retailers across Canada have grappled to adjust to declining sales. In Saint John, this has forced Brunswick Square tenants to leave in droves for cheaper or more flexible locations.

The Brunswick Square Shopping Centre in Saint John changed hands a couple of years ago, from Fortis Properties Corp. to Slate Asset Management. (All photos by Michael Hawkins/The Globe and Mail)

“It just leaves a bad impression,” says Cathy Hutchinson, owner of Manchester Shoe Salon, which relocated from Brunswick Square to the nearby Market Square complex in 2010. “Anybody who’s here visiting or looking at business … all they have to do is walk through and say, ‘Oh, geez, not too impressed with this.’ That’s a huge problem.”

Until 2015, the property – which includes the office tower and the Delta Hotel straddling the mall – was most recently owned by Fortis Properties Corp., the real-estate wing of Newfoundland and Labrador’s Fortis Inc., primarily a utility company.

When Fortis sold off real-estate assets to focus on its core business, Toronto’s Slate Asset Management snapped up its New Brunswick office holdings, which included Brunswick Square. But by then, many tenants had left – fed up with the aging mall, frustrated with its need for a facelift, inflexible hours and rent that didn’t reflect softening retail. And others, including Starbucks, continue to leave the mall despite the new owners.

“If your rent’s going up and your sales are going down, you’ve got to go to the landlord and say, ‘Give me a break here,’” Ms. Hutchinson says. “‘Do you want to have an empty store, or do you want to work with the tenant?’”

Pearl Morrell moved her women’s wear store, Collectables, from Brunswick Square to a storefront a block away on Germain Street less than a year before Fortis sold the property. She says she’s saved money on rent and through setting her own hours.

“If it’s Friday or Saturday night and there’s nobody there, those are the hours the mall sets – here, we just set our own time,” she says.

Ms. Morrell was in the mall for nearly 25 years. Now, she says, “It feels like it’s my own business again.” 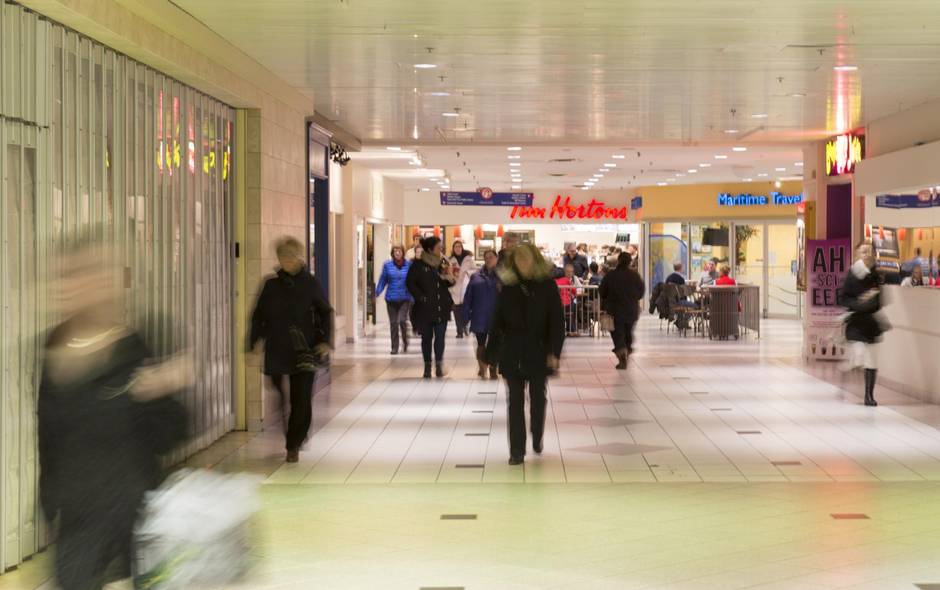 The mall has slowly lost tenants over the past decade, including a Starbucks outlet that was in the shuttered space to the left here. A Starbucks representative says opening and closing locations is 'a normal part of doing business.'

Less-than-flexible operating hours are a common complaint among current and former tenants. Lynn Bell wanted to keep her gift shop, Foxes Den, open later when tourists came through on cruise ships and buses, eventually moving two buildings away; Anna Scichilone is moving Mondello Salon & Spa out of the mall at the end of the month so she can start taking Mondays off.

(A representative for Starbucks said in an e-mail that opening and closing locations is “a normal part of doing business” for the brand.)

“I can’t speak as to why every tenant left, and what their motivation was, and if they reopened,” says Stephen Hefferton, Slate’s director for Atlantic Canada. Frustration over mall hours are a universal problem, he points out – every mall has to stay consistent to lure in customers – and Brunswick Square’s rents, he believes, are fair market rate.

“But I sense that, in [the Saint John] market, any interior location right now is challenged,” Mr. Hefferton says.

Just as Fortis was a utility company with a small real-estate wing, Slate’s New Brunswick holdings are an awkward fit for the company, falling under the wing of their office real-estate investment trust. This puts their adjoining retail spaces – including in Brunswick Square and Fredericton’s Kings Place – in an uncomfortable spot.

While Slate does have a sister retail REIT, giving the company some experience with mall properties, “those aren’t our focus” at the office REIT, Mr. Hefferton says. He joined the company from Fortis when the sale was completed in 2015, but did not oversee New Brunswick properties before the sale; a Fortis spokesperson declined to comment.

“When we bought the asset, we knew we were going to have a few bumps based on its age, geographic location and the market in general,” Mr. Hefferton says. “We wanted to hold the building for the longer term, and invest in the building, and that has started.”

Physical retail across Canada has been weakened since the 2008 downturn and the simultaneous rise of e-commerce, but East Coast retailers have recently suffered slightly more, says Jim Cormier, the Retail Council of Canada’s Atlantic director. (This is in part, he says, because of Alberta’s oil-centric economic slowdown, since many East Coasters depend on the province for work.)

This requires local retailers to be especially versatile. Without commenting specifically on Brunswick Square’s past and present owners, Mr. Cormier says that generally, if “retailers are faced with a situation where they have a landlord that doesn’t appreciate their efforts to be flexible and to compete, then that can sometimes cause an issue.” 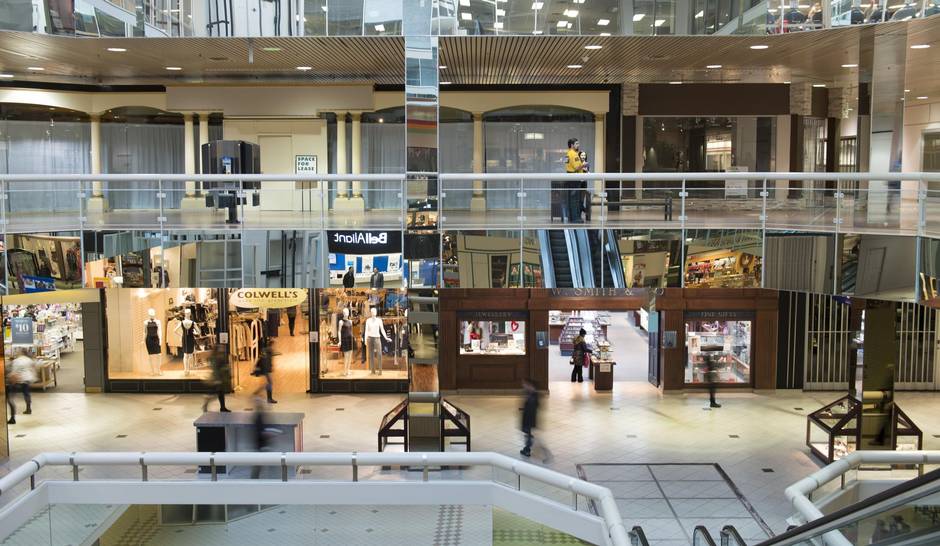 Mr. Cormier suggests, too, that given the continuing investments in Saint John’s streetscapes, retailers have more attractive options for locating. The same is happening in Halifax, where he works, he says.

Many people interviewed for this story suggested that Brunswick Square’s problems were inevitable with time, but that the owner could have been more flexible to accommodate retail trends.

Saint John’s outdoor storefronts offer plenty of destination boutiques and nightlife with easy access to street parking. Central indoor malls such as Brunswick Square don’t have the same destination feel and can have costly, cumbersome parking garages; they’re usually designed to cater to office workers, who can now shop online or visit spacious power centres on the way home.

“The nature of retailing is changing,” says Martin Aitken, who closed his Brunswick Square location of Aitkens Pewter for related financial reasons. “Many developers built a lot of retail space, but the retail market didn’t expand as fast as the retail space expanded. Ultimately, consumers are going to take the path of least resistance.”

Nancy Tissington, head of the Uptown Saint John business improvement area, says that after talking with other BIAs in the region, Saint John’s mall struggles may be a microcosm of a bigger problem. “People tend to be coming out on the street,” she says, but “... malls are struggling in the urban centres.”

Everyone involved, Mr. Hefferton included, hopes the mall can retool itself to align with the city’s goals of a bustling uptown. “The retail is difficult,” he admits. “We’re looking at investment to the property, to modernize it and ensure there’s a retail component going forward.”

That means refurbishing the parking garage – which has started – likely followed by a ground-up makeover for the mall interior.

“Retail is a market that’s always changing, and I think that property hadn’t been updated in a while,” Mr. Hefferton says. “I think it needs that. ... It has been a tough time.” 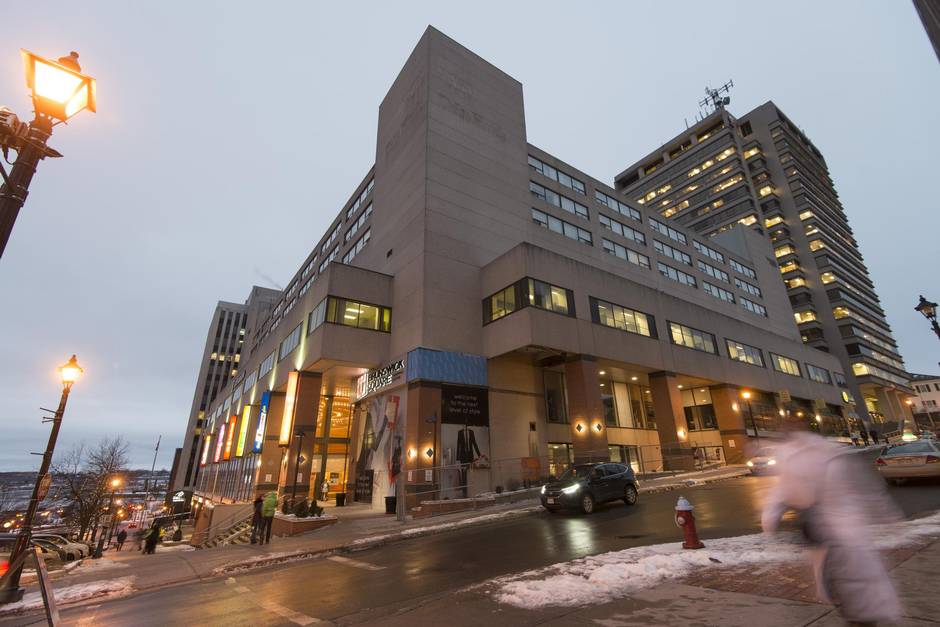 The new owner, Slate Asset Management, says it intends to hold the property for ‘the longer term’ and has begun making improvements to it.

It’s not just uptown Saint John that’s affected by empty storefronts. The city’s east side has become home to a sprawling number of new shopping developments over the past two decades, with nearby retailers regularly hopping to fresh facilities, leaving empty husks behind for months or years at a time.

This undoubtedly affected uptown retail, too, especially when compounded with the city’s office vacancy rate: 18.7 per cent, according to CBRE’s fourth-quarter 2016 market overview.

But there are changes afoot. Irving Oil Ltd. is building a new, 11-storey tower on King’s Square in the heart of uptown, which will bring together 1,000 of its employees from across the city. Doing so will require vacating other properties, but concentrating employees uptown would help offset other businesses that have left the core.

“The city’s been very proactive to try and encourage downtown development,” Mr. Mussett says. “As we see the cycle mature and see more densification downtown, things will come back. But it’s got to be led, in any city, by the creation of residential units.”