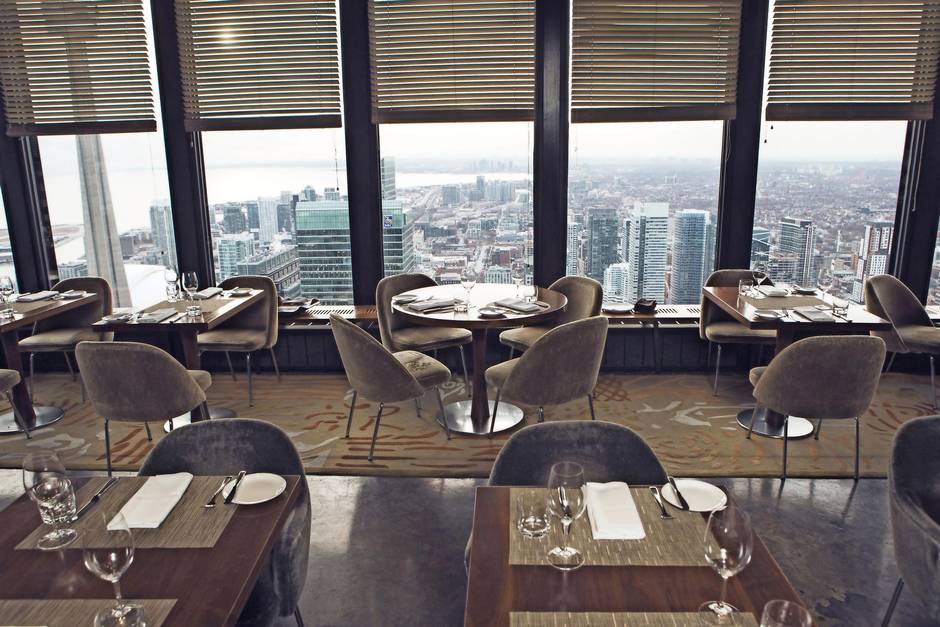 The tables are set for dinner at Canoe, a Toronto restaurant that is both upscale and up in the air. It's on the 54th floor of the TD Centre. (Jennifer Roberts for The Globe and Mail)

There is no change room at Oliver & Bonacini’s Canoe restaurant, atop the 54th floor of the Toronto-Dominion Centre in Toronto’s financial district. Thankfully, kitchen staff have the PATH: When they head in to work, they change clothes in a locker room rented in a neighbouring building, then take the underground pedway to the tower-topping restaurant.

Such is the price of doing business at Canoe, where space is at an incredible premium. In exchange for the TD Centre’s sweeping views of Lake Ontario, the Humber Bay and the western Greater Toronto Area, value must be wrung from every square inch. And that’s just half the battle for the two-decade-old Bay Street haunt.

Like many other sky-high restaurants, it must create the appearance of a smooth operation while fighting against the myriad logistical nightmares that can pop up when you’re 180 or more metres from the ground. 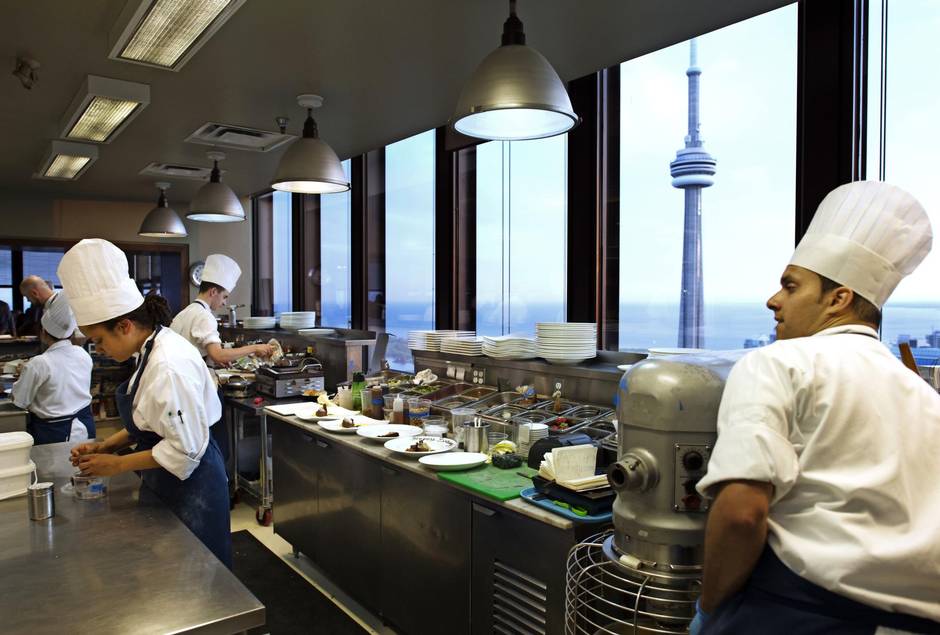 Kitchen staff at Canoe do without one of a high-end restaurant's mainstay appliances: a gas stove. Having gas that high up is too dangerous, so they cook with induction. (Darren Calabrese for The Globe and Mail)

Seated at Canoe’s westernmost row of tables, general manager Lee Jackson briefly dismisses the skyline that spreads out behind him. “Nobody’s going to come up here and be happy paying $55 for an entrée because of the view,” he says, as a plane lands on Toronto Island to his left. “So the food and the service are absolutely paramount to business here.”

The struggles of penthouse (and near-penthouse) restaurants start at the ground level and snake their way up. Canoe, for instance, must share the TD Centre’s three-port loading dock with the rest of the tower’s tenants. If a supplier shows up at the wrong time, their wait can be as long as 2 1/2 hours.

“We’re very fortunate that we’re a restaurant a lot of people want to work with, so our suppliers bite the bullet to be able to do business with us,” Mr. Jackson says. 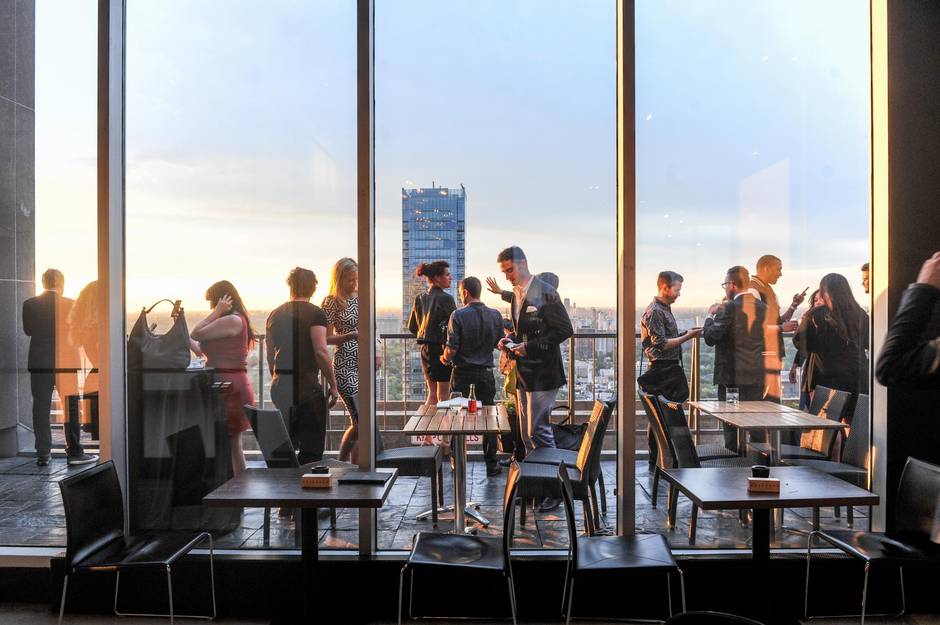 Guests of The One Eighty restaurant in Toronto may have ample room on the north patio for mingling and sight-seeing, but what they won't see are the cramped storage areas for supplies and employees. (George Pimentel)

A few kilometres north, atop the Manulife Centre, staff at The One Eighty deal with the same kinds of struggles. Like Canoe, they have minimal storage space, meaning their deliveries are smaller and more frequent – they could get fish every second day, but prefer to restock daily. The Yorkville restaurant has an even more precarious load-in situation; delivery trucks often get stuck in loading-bay jams, and occasionally call up to the 51st-floor business to have someone come down and pick up supplies.

“They actually will stop on Bay Street and run into the centre to do the deliveries, because to them it’s just cheaper to get a ticket than it is to spend two hours waiting to get into the loading dock,” says Sebastien Centner, chief executive officer of Eatertainment, which operates The One Eighty.

The CN Tower has fewer tenants than most skyscrapers, but it soars much higher. The tower-topping 360 Restaurant has to bring supplies and staff up the same six elevators everyone else uses. Much of the prep for the 400-seat restaurant is done at the base of the tower – meat is cleaned and portioned, stocks are prepared. Then all of it – including 6,000 pieces of cutlery, 2,500 pounds of beef and 500 loaves of bread a week – is carted up a passenger elevator to the kitchen, where every plate is made to order. 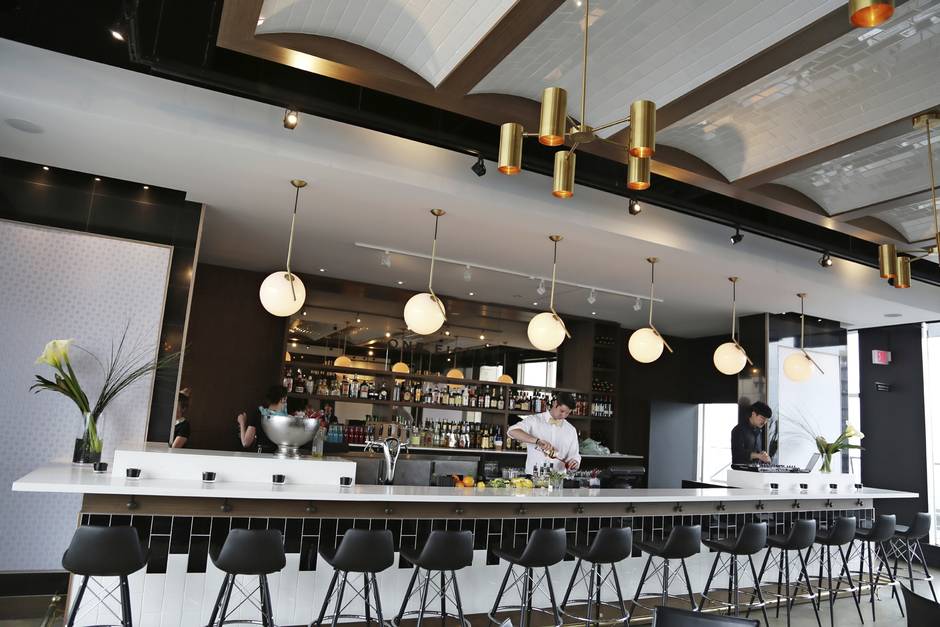 The One Eighty has a dedicated elevator to get supplies to the bar and restaurant. If the lift breaks down, the eatery must share another elevator with the residences below. (George Pimentel)

Making sure everything is in the right place at the right time requires meticulous inventory sheets and constant radio communication. “In a traditional restaurant, you have the main line in front, and production behind the main line. Ours are 1,100 feet apart,” says Peter George, 360’s executive chef.

Depending on the tower, elevators themselves can pose problems. The One Eighty has a dedicated elevator, but if that breaks down, the restaurant is forced to use its backup – one that’s usually used by the 50 residential floors below. At Canoe, to get deliveries or to retreive something from their underground dry storage, staff and suppliers might have to fight for the two first-come-first-serve freight elevators – one of which can be sidelined for hours at a time for tenant move-ins.

Once you reach the top, things should be just like every other restaurant, right? For diners, yes, things usually appear to be. It’s a different picture for chefs and cooks. You won’t find gas stoves at Canoe, The One Eighty, or 360. “Having gas on the 54th floor is extremely high-risk,” says Canoe’s Mr. Jackson. Both his restaurant and 360 cook by induction instead, which frustrates some chefs, but certainly has its benefits. “The kitchen is a lot cooler on a daily basis,” 360’s Mr. George says. 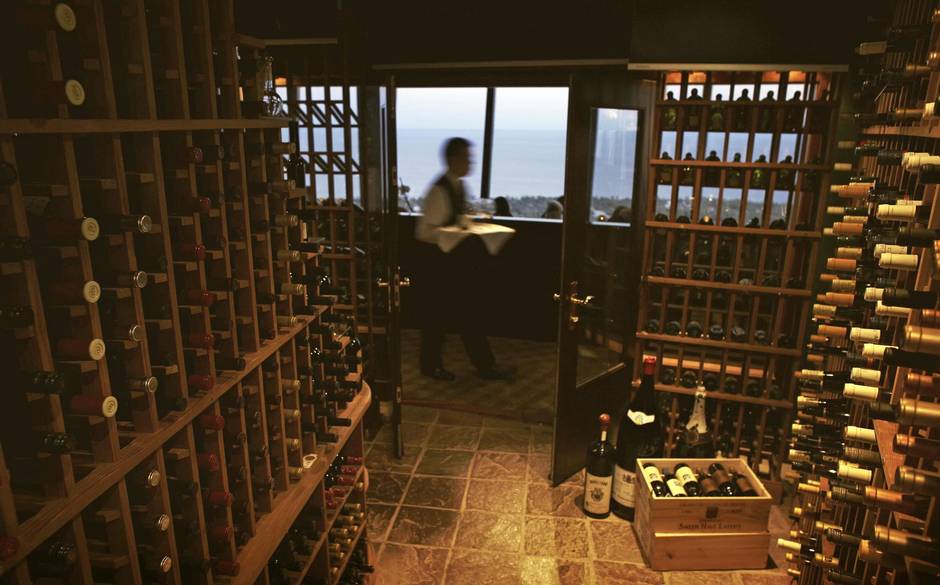 The CN Tower's 360 has an impressive wine cellar and dining space. Much of the food preparation happens in less rarified air: at the base of the tower. (CN Tower)

Induction might not be what all chefs are used to, but Mr. George insists his team has grown to love the magnetic means of cooking. “There’s an unbelievable amount of control,” he says.

Chefs at The One Eighty, meanwhile, can use their unusual circumstance to make creative meals with a pizza oven. “It gives them the flexibility of doing something we normally couldn’t in an environment like that,” Mr. Centner says.

And then there’s the view, which is under immense pressure to be kept bright and squeaky-clean. Canoe’s windows are washed quarterly, though Mr. Jackson wouldn’t mind it being more frequently. But that would not only squeeze Canoe’s already-tight margins – it could potentially violate the contracts it has with its landlord. 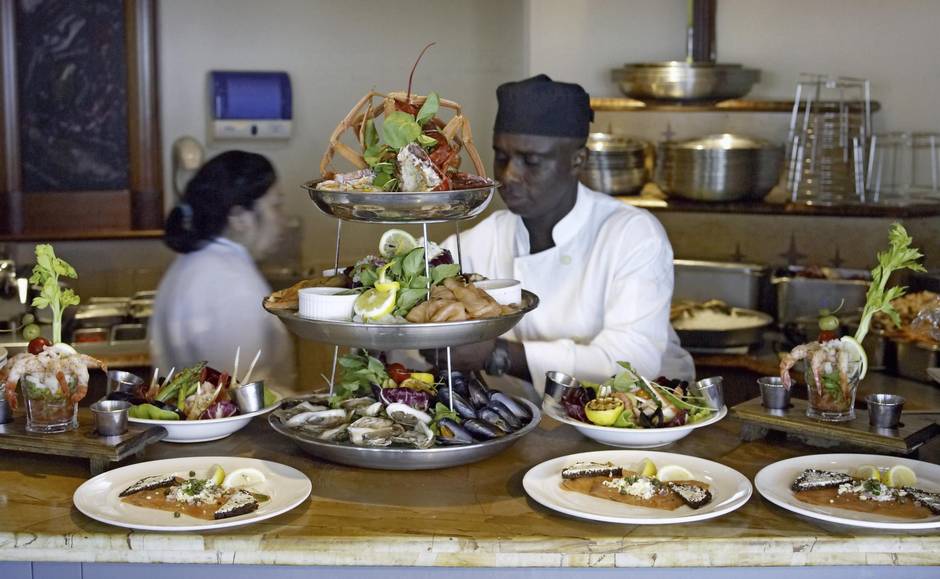 The tower-topping 360 has to bring supplies and staff up the same six elevators everyone else uses. (CN Tower)

Weather, however, is less predictable. But Mr. Jackson says that Canoe’s brand alone helps keep reservations up even when fog or sleet descends on Toronto. “If it’s a foggy day, it’s like rain on your wedding day,” he says. “You don’t really have the opportunity to change the date if you plan to come.”

There are, however, fewer window-seat requests when the weather’s a nuisance. And that can be a good thing, in its own way. “It allows people to focus on the food and the service, which is what actually keeps people coming back.”