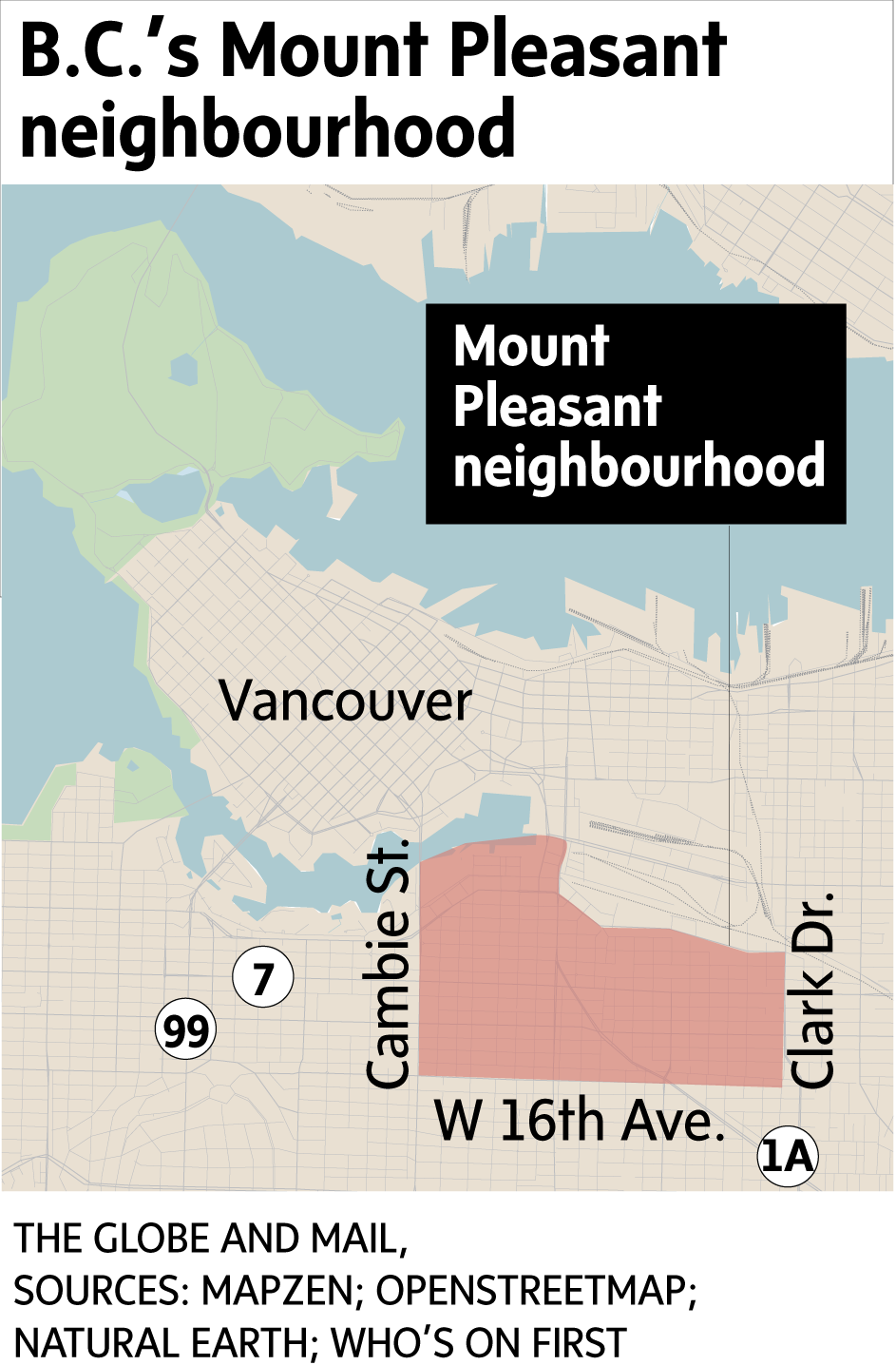 Vancouver is looking to increase density in Mount Pleasant to relieve some of the neighbourhood’s excessive success. But will it work?

“Mount Pleasant is the first choice for creative industries. … The trouble is, the buildings are not there. They are not available,” says Hani Lammam, executive vice-president at Cressy Development Group in Vancouver.

Once a mixed-use neighbourhood, with light industry and the kind of unimposing vibe once so prevalent throughout Vancouver, Mount Pleasant’s property values have continually ratcheted up with an influx of tech businesses, creative companies and accompanying real-estate speculation, much as nearby Gastown and Yaletown have experienced.

The neighbourhood’s vitality is only expected to increase, given its central location on the other side of False Creek from the downtown. Emily Carr University of Art and Design is moving this fall from Granville Island to its new Mount Pleasant campus, forming a creative anchor for the area. New restaurants have emerged, new galleries have opened, craft breweries are bubbling up.

The SoHo Effect, a turnover of low-watt commercial properties into high-watt, must-see properties, is building from strength to strength. And the success and attractiveness of Mount Pleasant is bringing even greater demand and greater competition for tech-suited office space.

Developers and the city are trying to meet the demand. As real-estate services company CBRE reported at the end of last year, the commercial corridor along Broadway, a main artery through Mount Pleasant, with its easy access to public transit, is seeing “record levels of development projects,” with more than 1.5 million square feet of projects in the planning stages. 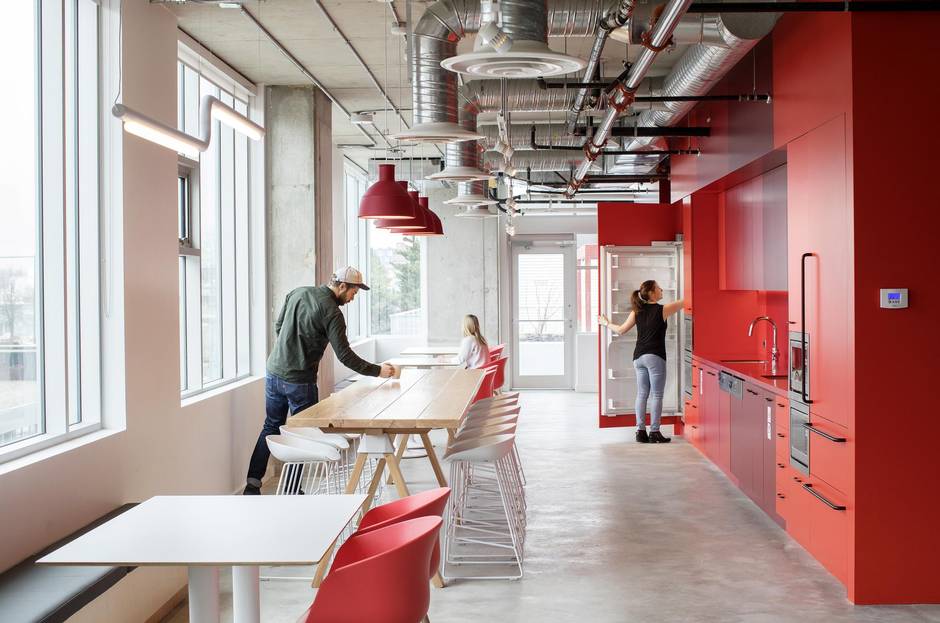 DHX Media West found 75,000 square feet in a new building at 5th Avenue and Yukon Street in Vancouver. Floor plates of 100,000 or 120,000 square feet are harder to come by and are in demand from international tech companies. (Janis Nicolay)

“The Mount Pleasant and [adjacent] False Creek areas continue to offer a live-work-play lifestyle, which is sought after by the technology and creative industries competing to attract and retain top-tier talent,” the report says. “This trend is expected to continue as Vancouver experiences a low supply of skilled tech workers, coupled with changing demographics within the workplace.” (Read: a younger demographic.)

Social media management company Hootsuite has been a harbinger of the change, setting up its rec-room-style offices in the neighbourhood. It is typically viewed as an example of the kind of companies the area might see more of, if only there was more room.

“What seems to happen a lot is that these larger tenants come into the marketplace, and their first choice is the Mount Pleasant area, but there aren’t big enough chunks of space to meet their requirements. And these requirements are typically in excess of 100,000 square feet, and those spaces just do not exist. So, they’ll go find alternative locations,” Mr. Lammam says.

Often this means having to settle with office space even closer to the downtown core, which is less desirable. Mount Pleasant appeals to creativity. A non-corporate culture, easy access to transit and bike commuting: These are the amenities tech employees want. The City of Vancouver, in a policy report last November, even officially notes Mount Pleasant as having “a reputation as edgy.” 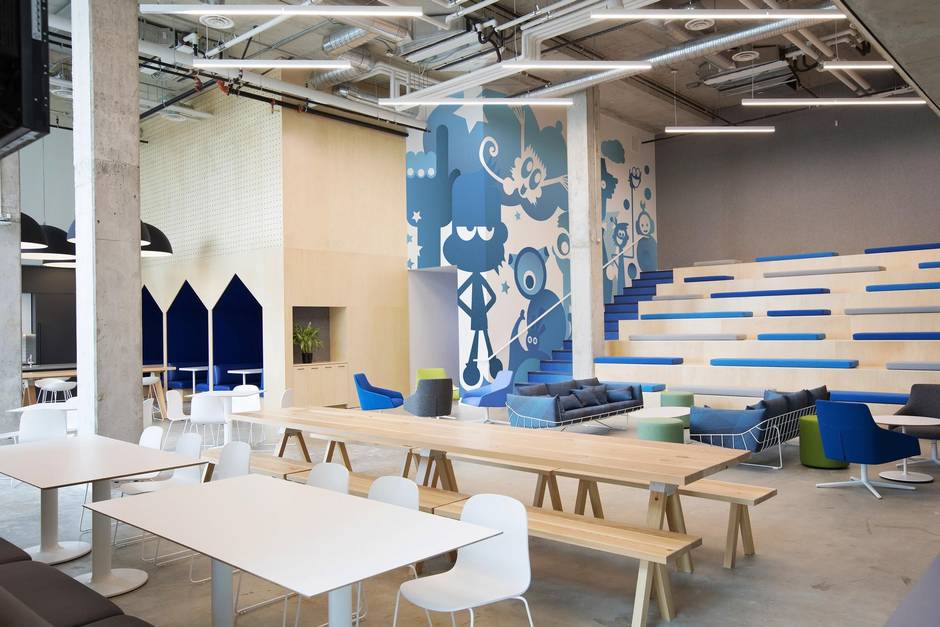 High ceilings give DHX Media's lounge and lunch areas an open feel, but they are equally important to accommodate the company's computer servers. (Janis Nicolay)

How to maintain “edgy” through public policy is debatable. Still, the city knows the type of tech companies vying for space, and it has changed zoning accordingly, even if occupancy is still hampered by limited floor plates and soaring land values.

“The development process is slow. Finding property that is economically feasible is challenging. Because there is so much land speculation that happens in our marketplace, prices get driven up dramatically, and it’s very competitive,” Mr. Lammam adds. “If you’re late to the party, you can’t make the numbers work. We’ve been fortunate. These land positions that we have, we acquired quite some time ago.”

Cressey’s newly completed office at West 5th Avenue and Yukon Street has 75,000 square feet of office space rented to production and broadcast company DHX Media. Yet, floor plates of 100,000 or 120,000 square feet are what international tech companies are often looking for.

City hall has also had to change its zoning definitions of what tech companies actually do. Zoning had been years behind the times, lumping tech companies together as “information technology” industry – that is, viewing the industry as merely producing computer software, hardware and communications equipment.

“Before, the zoning bylaw had a very limited description of the use of information technology. So, in addition to what you would expect in this sort of neighbourhood, like auto body shops or metalwork shops, woodwork shops, typical light manufacturing, information technology were companies that did software,” says David Nicolay, local business owner and principal designer at Evoke Design. 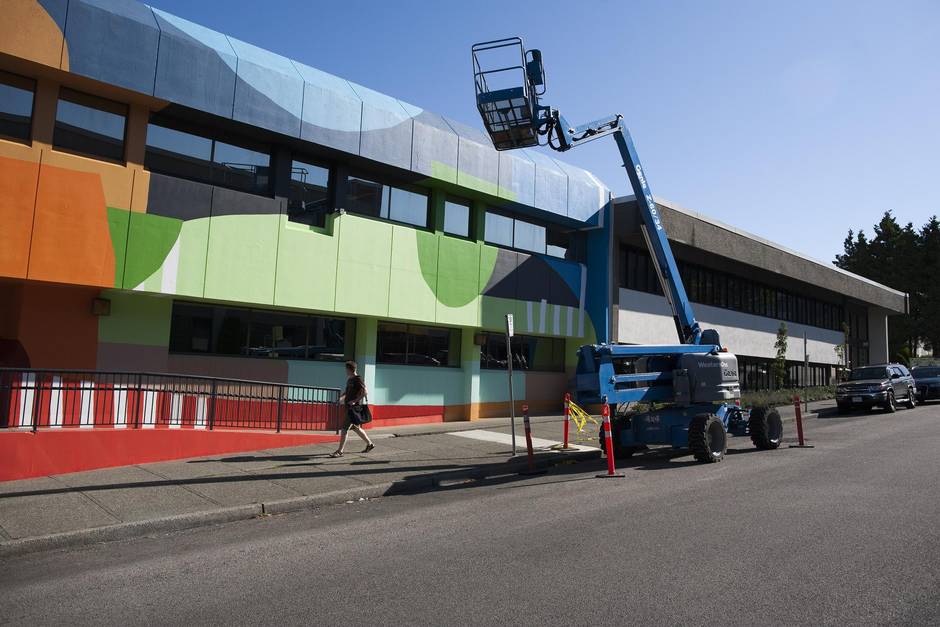 Hootsuite was among the first large tech companies to arrive in Mount Pleasant. (Rafal Gerszak/The Globe and Mail)

In short, the zoning treated tech companies as if they were still producing a physical product, such as a CD-ROM or some other ancient artifact. “It was a very old idea,” he says.

The reason this matters is because building permits need to match the way new tech companies function, such as the interior of Hootsuite.

Or, for instance, it can mean ceiling and floor plate requirements to house the necessary computer servers vital to a business.

“If you had a building that didn’t have these tall floor plates, or at least one floor [with them], it would be very difficult to put in a server room. These tech companies need massive server rooms. The DHX server room is 25 feet [7.6 metres] tall,” notes Mr. Nicolay at Evoke. He helped design the interior of Cressy’s Fifth and Yukon building, occupied by DHX, and his design company is also active in the neighbourhood with other businesses such as restaurants and a brewery.

“We’ve invested heavily in the neighbourhood, and with the change that is happening, it’s such an energized neighbourhood now,” he says, adding that “there has been a concerted effort by the city to really develop so-called innovation economies around the city. And Mount Pleasant has some pretty pointed attention.”

A new emphasis by the city is to increase density and building along the Quebec Street corridor east of Main Street, with the city report noting flat out that “the intent of the new zones is to retain and support the growth of digital and technology businesses.”

As Mr. Nicolay observes, “There is definitely an increase in scale happening.”