Fantastic and colourful designs for thrill rides are everywhere in the Toronto headquarters of Forrec Ltd., one of the world’s most prolific creators of theme parks and resorts.

On a designer’s desk, an architectural model features a flying saucer slicing through two buildings. On the walls are visionary artworks created by graphics designers for the amusement parks of tomorrow.

Forrec, whose name is a combination of “for recreation,” has become a global creator of amusement and water parks and resorts since its first big project, 35-year-old Canada’s Wonderland near Toronto. It’s now growing so fast that it has just reimagined and expanded its office on Dufferin Street in Toronto’s trendy Liberty Village, which is fittingly near the entrance to the Canadian National Exhibition. 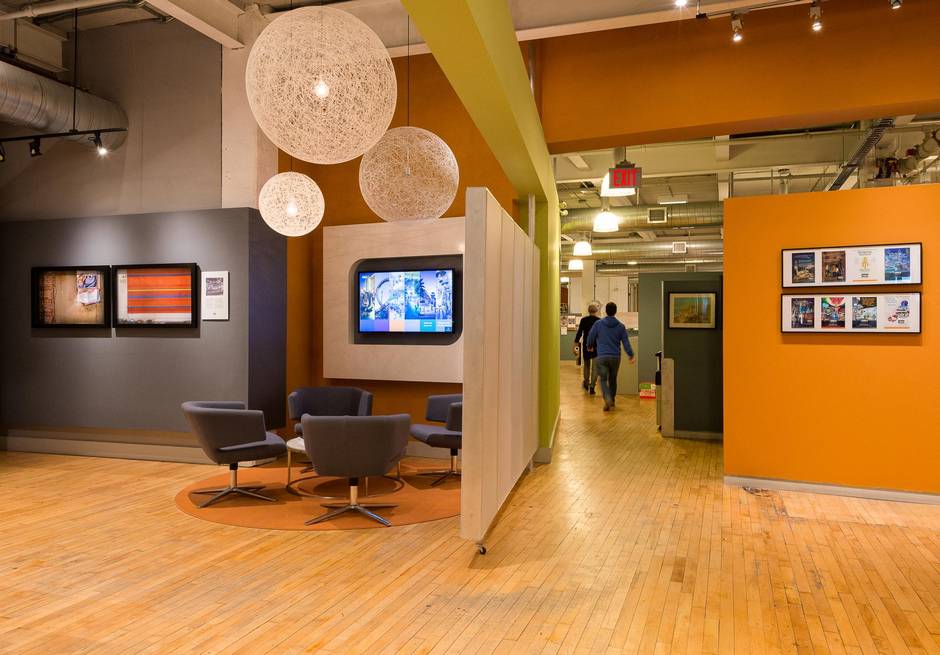 The 1908 building was formerly a factory for Canadian Sunbeam Lamp Co., which became part of Canadian General Electric. Its vast spaces, high ceilings and hardwood floors lend themselves to Forrec’s multidisciplinary concept that clusters teams of architects, interior designers, graphic designers, planners and landscape architects in the equivalent of neighbourhoods.

Over the past 10 years, the team has doubled to 120. A space squeeze meant some specialists ended up with desks in separate rooms far from the rest of their team. The finance director shared a room with the ventilation equipment and banks of circuit breakers.

It was time for a rethink to make the space as inviting as the malls and amusement parks the company creates for clients around the world, many of them in Asia, says Rochelle Jones, Forrec’s practice leader for interiors. The company anticipated growth, so it already had a lease on extra space beyond its original office. This was originally used for storage and then for overflow of employees. 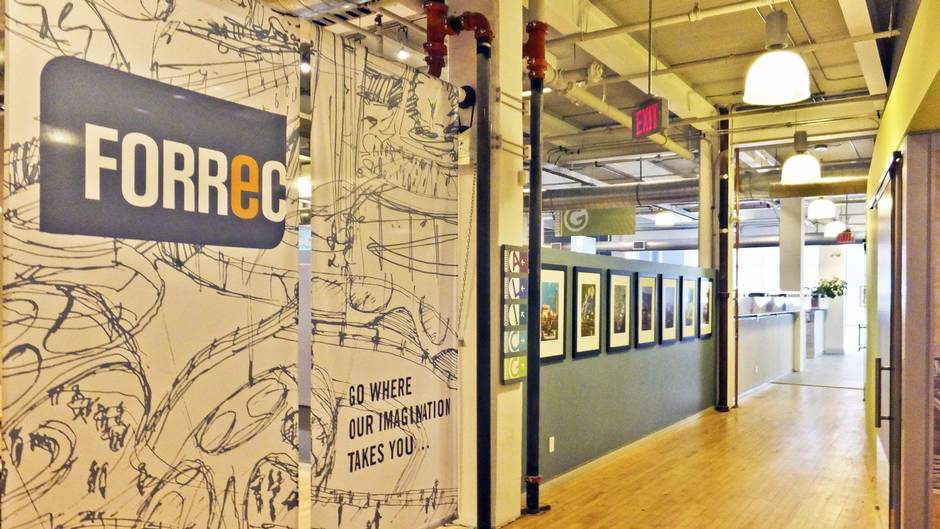 The Forrec banners provide not only art but privacy for the central meeting area behind them. (Wallace Immen/The Globe and Mail)

The redesign was all planned in-house. A team of the company’s interior designers, architects and planners was formed to reimagine the 17,800 square feet into a themed office with neighbourhoods for the specialty teams and meeting rooms and common areas between them for collaboration.

Down came walls and in came colour-coded zones with waist-high dividers. Overhead banners help identify the specialties of each neighbourhood. There are five meeting enclosures, with glass sliding doors, decorated with artwork for privacy. Seven additional open spaces are located between the working areas for teams to meet informally to collaborate on projects.

The staff was polled on what kinds of space and equipment they needed. One of the biggest challenges turned out to be getting some of the graphics people to part with their cherished drafting tables in the interests of saving space when so much gets done digitally, Ms. Jones says. 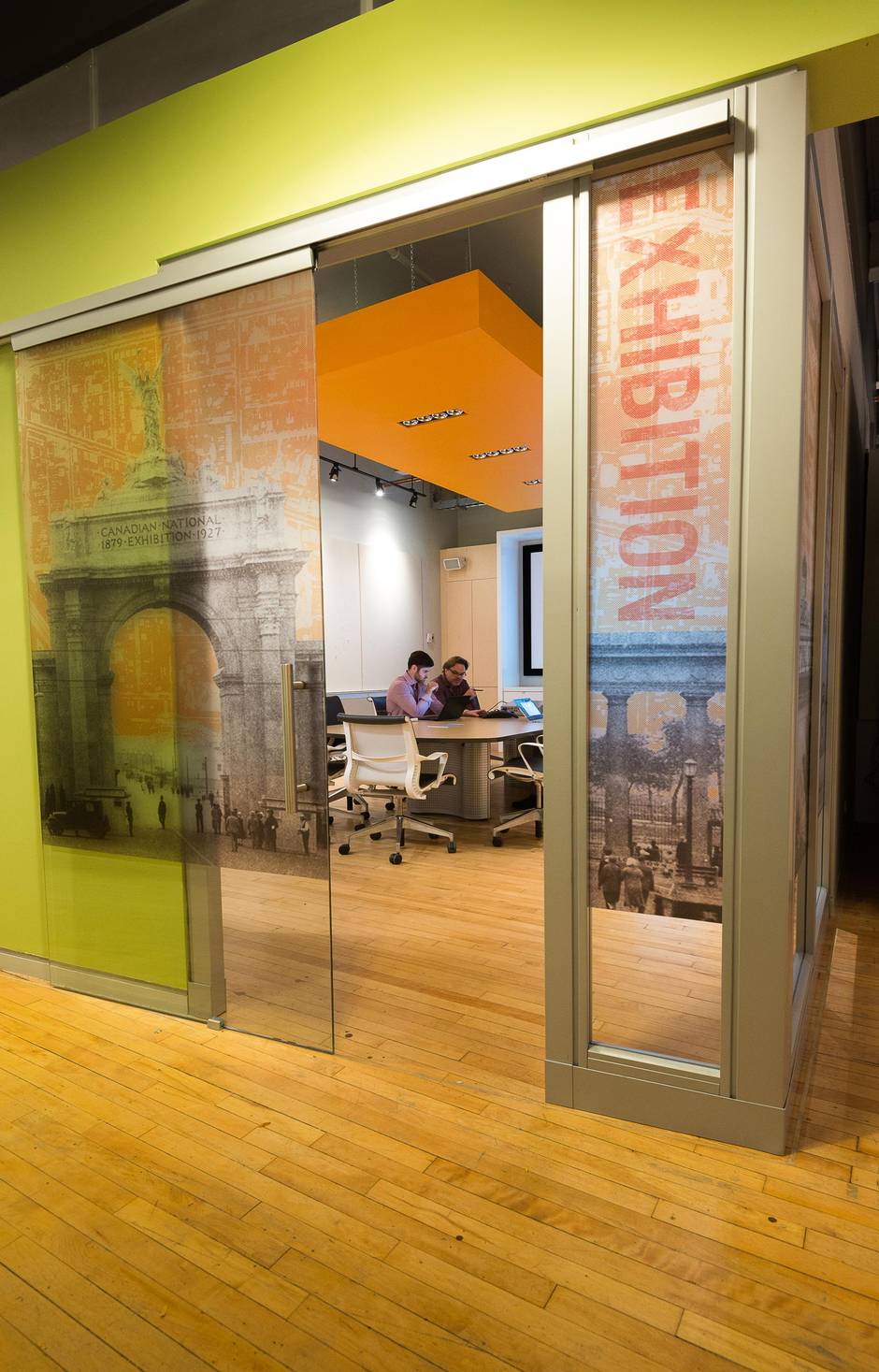 “We had to try to figure out who really needed them and who didn’t. There was a bit of push back when we told people their boards had to go,” she says. Some of the tables were kept for shared use and the landscape team still needs them for the huge drawings they do, but many were taken home by the artists, and others were donated to schools.

For space-saving, extra chairs have been replaced by cushion-topped pedestals on wheels that roll under desktops and double as storage cabinets and cushioned stools for additional seating when needed.

The library was an old-school area that was retained. It’s still essential to have books of physical samples of materials, Ms. Jones says. The space has become smaller, though, as a lot of the references are available online. “But colours can be different on a monitor than they appear applied to a wall. You can’t get away from having samples to know the true colour.” 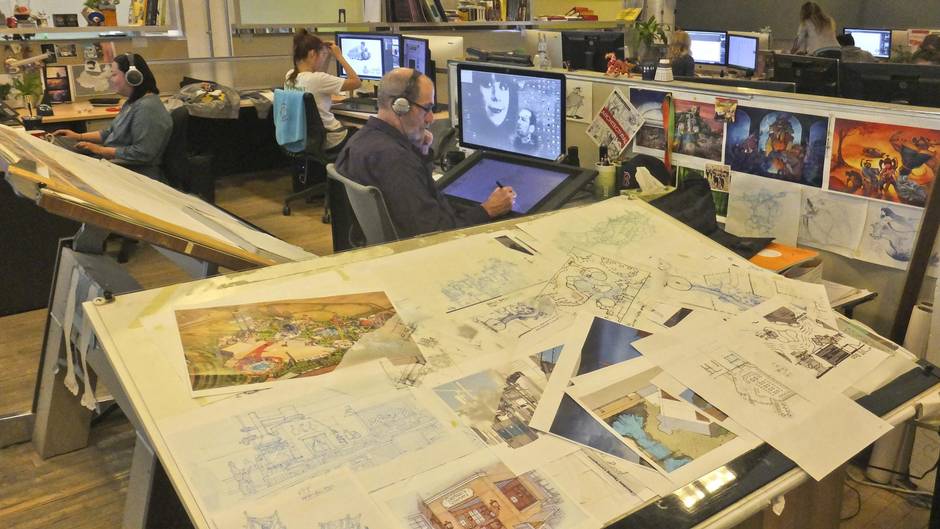 The technology shift to on-screen design allowed Forrec to remove many drafting tables and save space. But some remain. (Wallace Immen/The Globe and Mail)

There are still some large blank walls in the office and the teams are sorting through the hundreds of original graphics they have in their archives to update the space. “That’s our next step,” Ms. Jones says.

The ability to collaborate across disciplines that work closely under one roof is a major advantage of the redesign, says Court Sin, a senior architect at Forrec. “When I joined three years ago, I was in an expansion room and there was a mixed bag of people who weren’t able to find a spot in established areas of the office.”

Now his desk is in the middle of the architecture group’s area, which includes 31 employees. “The open format with teams in dedicated clusters gives us the opportunity to feel much more able to approach someone informally and ask for a few minutes of their time,” he says. 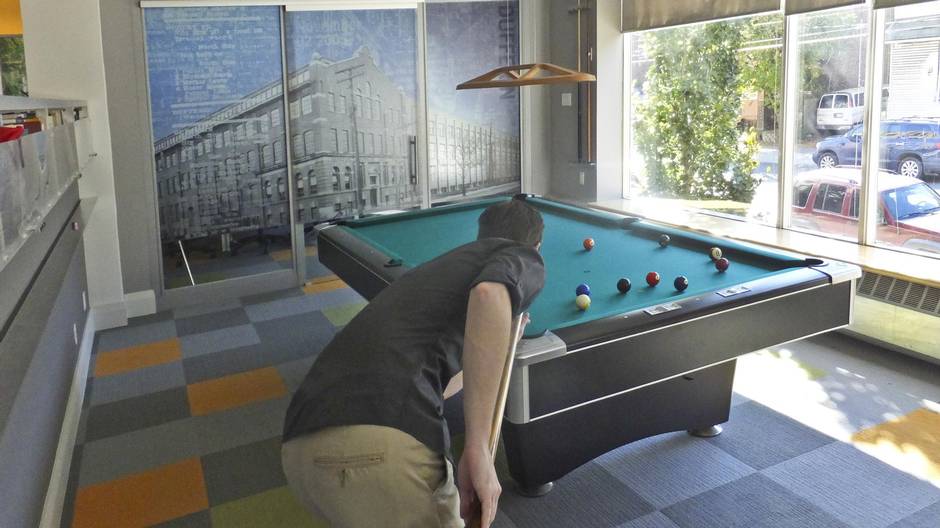 What's a creative office without a pool table? (Wallace Immen/The Globe and Mail)

And the meetings can become quite informal. A conference area at one end of the office features a pool table. Another space contains a lunch table with a pop-up net for playing Ping-Pong.

The redesign to bring the disciplines together in clusters has had immediate effects on productivity, says Terry Brown, Forrec’s senior creative director.

While it looks like a calm and relaxed place with people playing pool or Ping-Pong in the corners, “the amount of work that gets done here is huge. And I’m amazed at how we can all come together if there’s a high-pressure project. It’s unlike any place I’ve ever worked in over the years.

“It’s really like an atelier. People learn from the people working alongside them and all day long there are conversations about how we could do this a little better and here’s a new idea that we could apply,” he says.

“The kind of idea sharing and humour that happens makes it a place where you come in in the morning and know that interesting things are going to happen.”

Retail and mixed-use – Including Circus City in China and Stadio della Roma Convivium, a sports, culture and entertainment destination in Rome.

Resorts – Including the Centara Grand Mirage in Thailand, Yiti Resort in Oman and Muskoka Wharf in Gravenhurst, Ont.