There’s an apparition of things past on the upper floors of a new three-storey building on Toronto’s historic Queen Street West.

Etched on the stainless steel panels that screen the building’s glass facade are traces of the eyebrowed windows and crenulated brick trim of a Victorian-era building that previously stood on this site. It was destroyed by a still-unexplained inferno in 2008 that turned half a city block of stores into charred piles of rubble.

Bringing a building back from the ashes at 619 Queen St. W. has been a four-year saga for Hullmark Developments Ltd. The actual building was the simplest part, says Jeff Hull, the urban real estate investment company’s president. 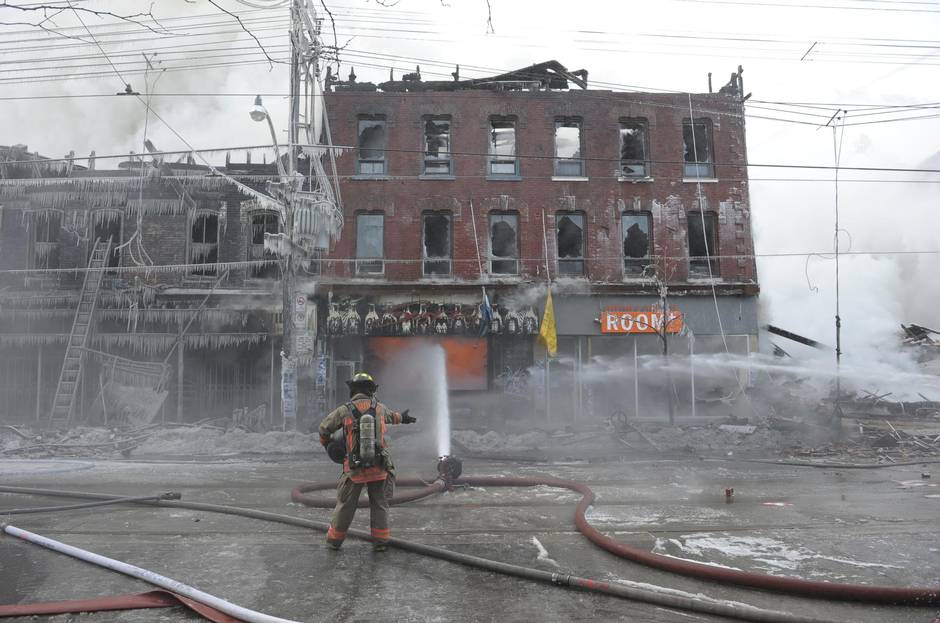 The site sat vacant behind a hoarding for four years before Hullmark bought it in 2012. A decision was made to build to three storeys, the same size as the former building, because it would speed the permit process by not requiring a zoning variance, Mr. Hull says.

However, complicating the project, that stretch of Queen Street West east of Bathurst is designated as part of a commercial heritage conservation district (HCD) because many of its buildings date back to the 19th century.

“The city’s heritage department doesn’t want faux reproductions in new construction; they want buildings that reflect the era they were built, but still respect the context and history of the adjoining community,” Mr. Hull explains.

The heritage rules also have prescriptions for materials that challenge the conventional approach to building a contemporary building. “That meant we spent an extra six months to a year working with heritage staff to come up with a design that is in line with the HCD guidelines.” 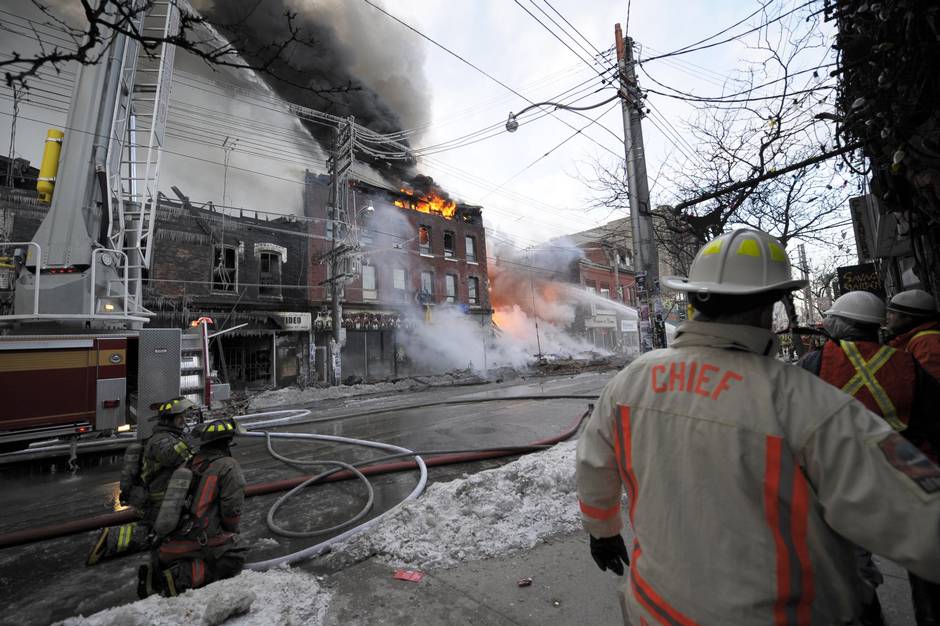 The cause of the fire on Queen West has never been determined. (Fred Lum/The Globe and Mail)

It set the team to thinking of ways to honour the history of the district and still produce a modern building with floor-to-ceiling glass windows to let in the maximum amount of light on a north-facing facade.

“We came up with the idea of creating a metal screen that is a memory of the building that was there,” Mr. Hull says. “We used photographs to make an abstraction of the building and created full-scale templates to etch onto stainless steel panels that are infused with bronze to give them a much richer colour than steel.”

Heritage officials were enthusiastic about the design, Mr. Hull says.

The fabrication was done by a foundry in Germany. The steel is about four centimetres thick, and attaches to brackets on the front of the building. Openings in the panels represent the former windows and a pattern of pinholes also allow light to shine through into the building. 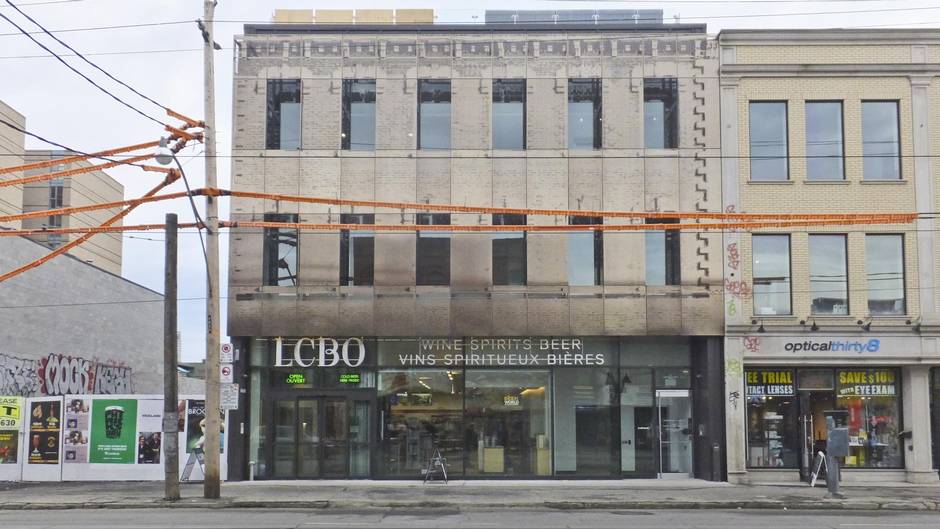 Gaps still exist in the Queen West streetscape eight years after the fire. But the new building at 619 Queen St. W. is among the replacements that balance modern construction with heritage preservation. (Wallace Immen for The Globe and Mail)

Another delay in the project was that Hullmark wanted to make sure it had a long-term tenant before starting construction. The former tenant of 619 Queen had been a video store, whose owners had no intention of re-opening at the location.

Fortunately, at the time, the Liquor Control Board of Ontario (LCBO) was looking for a location for a branch. “They have a mandate to expand their store count and the growing area on Queen Street was underserved. We were one of the few properties in the area that could accommodate their requirement for floor space.” They wanted clear floor and ceiling height, loading and storage and a delivery lane, Mr. Hull explains. LCBO agreed to a 15-year lease for the 4,000-square-foot ground floor and the basement for storage. Hullmark occupies the upper floors.

Three years after beginning the project, approvals were in place, but the developer still faced an environmental cleanup. It had a pile of charred wood and burnt rubble that had been bulldozed into the basement of the old structure. 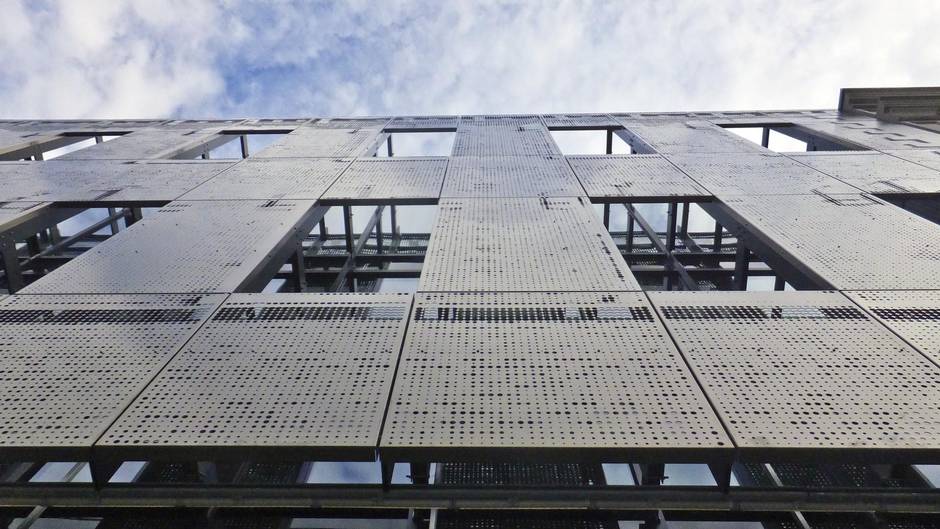 The resurrected building at 619 Queen St. W. features a metal screen on its facade to mimic the architectural style and details of the original. (Wallace Immen for The Globe and Mail)

To meet Ontario Ministry of the Environment requirements for the site, Hullmark was required to remove the rubble and debris to a secure site, which came at a premium to typical bulk excavation, Mr. Hull says. And it also cost more to shore up the site because the neighbouring sites’ rubble and debris would have spilled over into the construction otherwise.

Construction began in the fall of 2014 and was completed just more than a year later.

The structure itself is built of block and steel. The building has about the same floor area as the original building, but is slightly taller to allow for higher ceilings, says Richard Witt, principal of Quadrangle Architects, which designed the building. 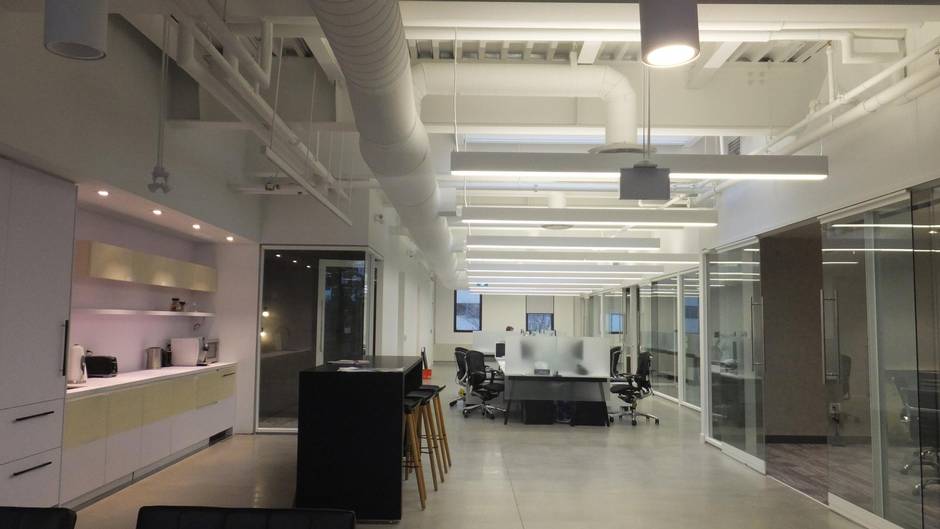 LCBO is the ground-floor tenant. The upper-floor offices are occupied by Hullmark Developments. (Wallace Immen for The Globe and Mail)

The previous building had been a walk-up, but now there’s an elevator. A landscaped roof garden also adds appeal because it has seating, a large meeting table and a barbecue.

Hullmark has also had extensive experience with restoration of vintage buildings and Mr. Hull says it’s still not clear which is more economical – restoring or new construction.

“Depending on the scope and scale, either could end up being the most expensive. I would say that in our experience retrofitting is less expensive, but more complicated,” he says.

“… I feel like we are constantly challenging ill-advised city policies and having to get special exemptions, and if we are not successful we are taking on significant unanticipated costs, all the while meeting higher-level city goals of heritage preservation and employment growth.”

That said, heritage is ultimately very important for the city, Mr. Hull says. “I think it’s important to value the built heritage that Toronto has, while at the same time not overvaluing things just because they are old.” 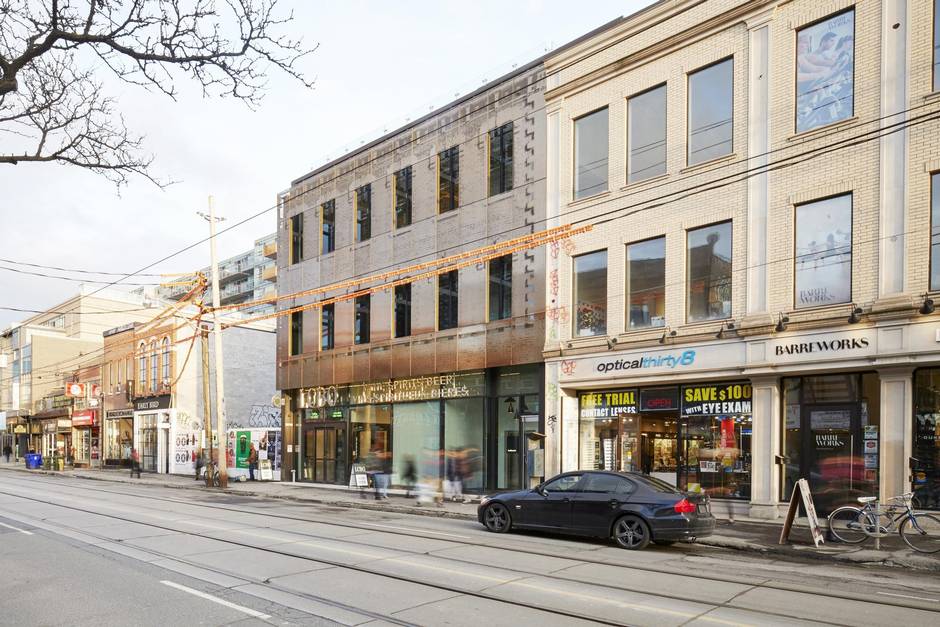 The developers saw promise in the stretch of Queen West hit by the fire. Nearby Loblaws and Crate & Barrel stores have also helped rejuvenate the block. (Ben Rahn/A-Frame Studio)

Three buildings on the south side of Queen Street West near Bathurst Street in Toronto were totally destroyed and others seriously damaged by a still-unexplained fire in the winter of 2008.

Partly because of the gap in the streetscape left by the fire, the stretch of small boutiques, restaurants and clubs along Queen West between Portland Street and Bathurst hadn’t undergone the renewal that’s happened on blocks west of Bathurst or closer to Spadina Avenue to the east.

One destroyed three-storey building owned by Duke’s Cycle shop was rebuilt relatively quickly, but two other lots remained behind hoardings for years. The lot to the east of 619 Queen is vacant eight years after the fire.

But the area is coming to life. “One of our business cases for buying the [619 Queen] property was the new tenants [on the surrounding block] including Loblaws and Crate & Barrel have opened stores on the street,” says Mr. Hull.