From the brand-new aquatics centre in Scarborough to the world-class cycling velodrome in Milton, the legacy of the 2015 Pan Am and Parapan Am Games can be seen right across the Greater Toronto Area.

Chief among the beneficiaries, though, is Toronto’s George Brown College, which gained its first student residence in the process. This was the culmination of a long journey to add what so many other postsecondary educational establishments take for granted.

While the Pam Am athletes village in the city core’s east end was purpose-built to be converted into condominiums following the conclusion of the sporting spectacle, one of those buildings, which housed the United States squad during the Games, was earmarked to accommodate George Brown students.

After an eight-month period of conversion by construction company Ellis Don, George Brown took over the building last April, finally welcoming its first intake of about 500 students last fall. With a school enrolment of more than 32,000 full- and part-time students, as well as apprentices, George Brown is already hoping to add more residences in the future, but knows the importance of gaining just one. 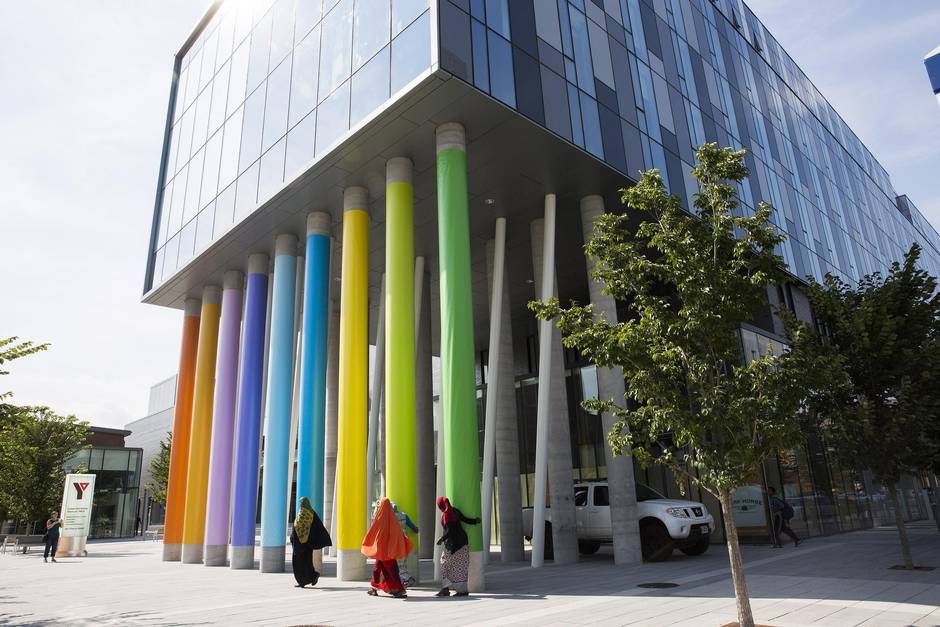 The new George Brown College residence in Toronto was originally the home of the U.S. team at the 2015 Pan Am Games. (Michelle Siu/The Globe and Mail)

“It’s a huge attraction, so we think it will help us with our applicants,” says Anne Sado, president of George Brown College. “We can’t accommodate them all but we’re hoping over time to develop some more residence capacity. The ideal would be another 500-1,000 beds.”

President since 2004, Ms. Sado made it her incoming mission to establish a student residence at the college, and had started working with developers years ago to find a plot of land that would be suitable. However, as the cost of land in the downtown core continued to rise, that quest didn’t look like it would bear any fruit.

She successfully recruited John Campbell, the former chief executive officer of Waterfront Toronto, to advocate on the college’s behalf, particularly in relation to the opening of the school’s Lake Ontario waterfront campus, which has 3,500 students, in 2012.

With the school’s intentions on the table, when the city successfully bid for the Pan Ams, its dream was finally realized. 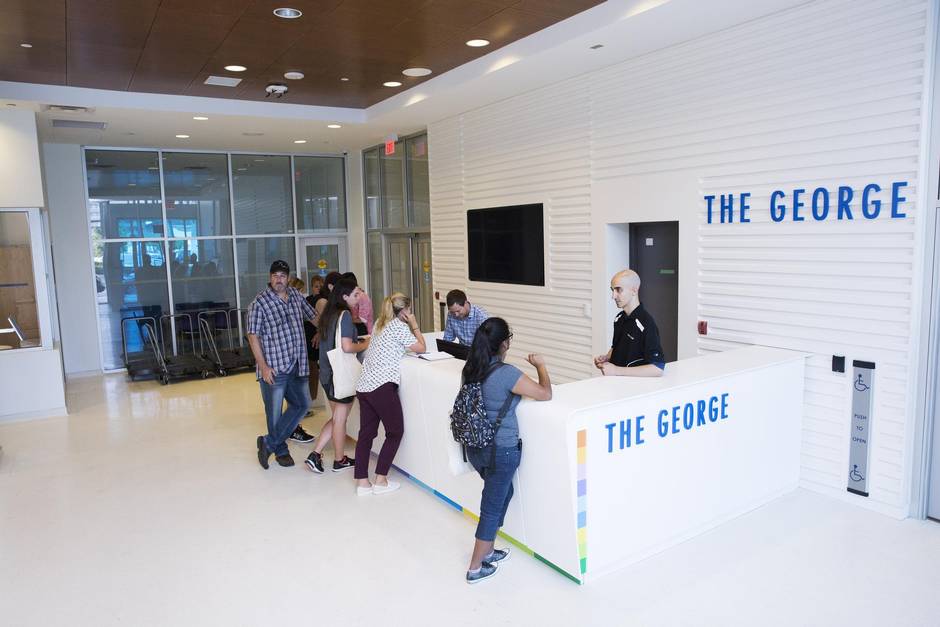 The George Brown residence, with its lobby shown here, can accommodate about 500 students. (Michelle Siu/The Globe and Mail)

“Infrastructure Ontario actually came to us because they were key in developing the Pan Am Games village and we were very interested in seeing what we could do to develop a residence here for students,” Ms. Sado says.

With one in four prospective incoming high-school students saying that their intention is to live in residence, the addition of student housing will be crucial to George Brown’s future, particularly for the 100 or so international students who are guaranteed a room in the building.

Of the nine floors, seven are living quarters, with the other two dedicated to common space, such as lounges and study areas. In addition, each floor has its own dedicated common space, whether that is a large kitchen area or workout-yoga rooms. The rooms are all two-bedroom suites, complete with small kitchenettes, with 32 room configurations in total.

Given the school’s involvement from the initial planning stages of the project, George Brown was relatively fortunate in being able to dictate exactly how the end product would look and function. 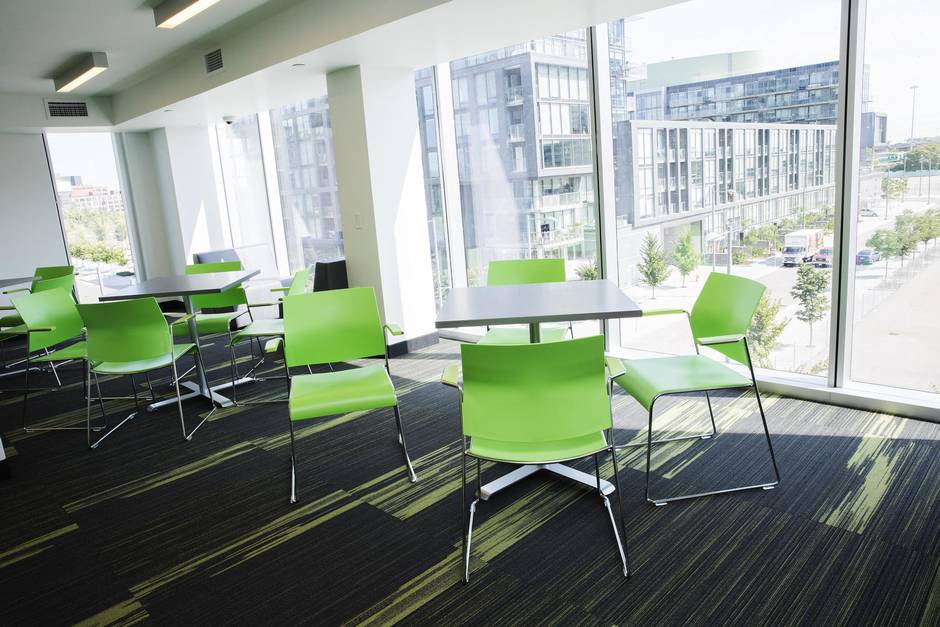 A couple of the floors are dedicated to open lounge and study areas. (Michelle Siu/The Globe and Mail)

Other recent residence projects across Canada have taken the same approach, retrofitting existing buildings to suit student needs, but they’ve faced more complications and challenges in their conversions.

Campus Suites Inc., a Canadian developer specializing in student residences, has a history of repurposing buildings throughout North America. While the company is working on a brand-new 800-bed residence at Toronto’s York University, set to open this summer, in previous projects it had to contend with converting former hotels into modern living spaces.

Montreal’s Parc Cité, a former Quality Inn hotel, and Ottawa’s 1Eleven, a onetime Holiday Inn, reopened as student residences in 2014 and 2015 respectively. Henry Morton, the president of Campus Suites, says that while revitalizing an older building is part of the process, it’s often the least of his problems.

As he explains, carpeting can easily be replaced, walls can be updated and appliances can be replaced. In many cases, the biggest challenge presented to him when repurposing older buildings is the unknown. 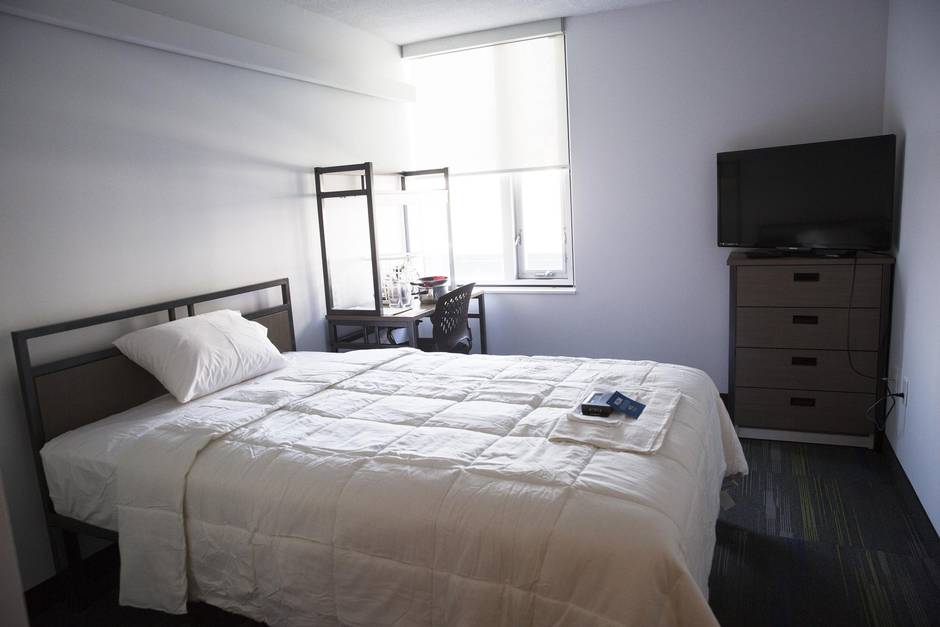 With one in four prospective incoming high-school students saying that their intention is to live in residence, the addition of student housing will be crucial to George Brown’s future. (Michelle Siu/The Globe and Mail)

“Buildings of those eras generally speaking have contamination,” Mr. Morton says. “They almost always have asbestos, just a given. But unless you disturb it, it’s inert, it doesn’t do anything. So you have to think about how you disturb it, or how you don’t disturb it.”

In the case of Parc Cité, a 140-suite downtown residence catering to McGill University students, local artists were recruited to bring vibrancy to the common areas of the building. 1Eleven, just across the Rideau Canal from the University of Ottawa, offers beds, a gym and a restaurant to 420 students.

Mr. Morton says there are two aspects to converting pre-existing buildings. One is the details, such as changing the wallpaper and furniture; the other is structural, such as removing walls and adding contemporary spaces.

“For example, in every project we’ve also got large fitness areas, large amenity areas, large congregating and study areas,” he says. “The whole building is really fully tricked out.” 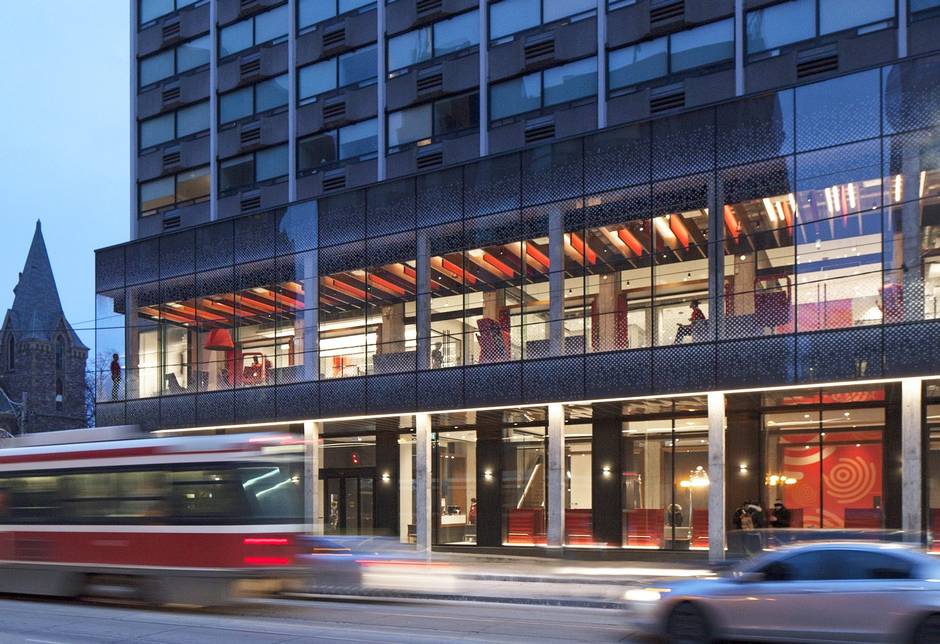 Repurposing an aging structure can be both costly and time-consuming, but it is often preferable to knocking down a building.

“Sometimes knocking down and starting again is really problematic,” Mr. Morton says. “You lose some of your zoning.

“But in both of our projects we didn’t actually need zoning approval.”

The other advantage of repurposing a building is retaining the original building’s character.

That was the intent behind the Parkside Student Residences in downtown Toronto, a 23-storey, 620-bed conversion of the Best Western Primrose Hotel, which opened its doors in 2015. 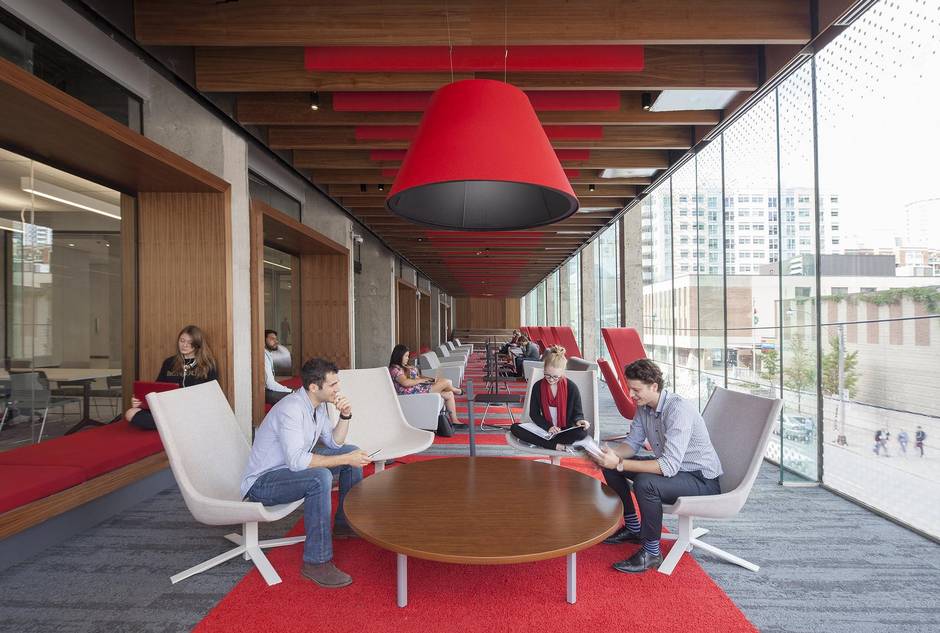 The enclosed and windowless platform of the former hotel was opened up to give students at Parkside open spaces and a view to the streets below. (Lisa Logan)

Gary Watson, an associate with Diamond Schmitt Architects, which designed the residence, says the hotel rooms and suites lent themselves readily to student dorms. But the 1970s design of the overall structure posed some unique challenges. For instance, the second floor of the hotel was a conference centre, with no windows at all.

“We switched it to more of an outward looking [space] by adding lots of windows facing the street and tried to celebrate the aspect of how students like to be seen,” he says. “So we have a big large second-floor lounge which overlooks Carlton [Street].”

Most of the work was done on the bottom two floors, as well as the basement, which was previously a food-services area in the hotel, and has now been converted into a cafeteria.

The architect’s approach to modernizing a dated building was simply to remove as many walls as possible to create visual transparency and connectivity between the different spaces.

While Mr. Watson says it was a different kind of building for Diamond Schmitt to work on, the hotel platform is what ultimately made the final product a multiple award-winning project for its interior redesign.

“It wasn’t as much work as we anticipated it would be because we simply cleaned it up,” he says. “It was the bottom floors where we tried to make it more of an amenity area and modern, ... trying to open things up and create a visual connection.”