A forgotten wartime Vancouver factory building is about to get a makeover into an office low-rise for the city’s small but emerging creative class of workers.

The Lightworks Building is in Mount Pleasant, a small, historic, light-industrial neighbourhood that’s been drawing eager young tech and digital media companies, particularly in the past year.

The former electrical components factory had been a vital part of the war effort during the Second World War, making radios and radars for ships. When its renovation is completed in 2017, it will become 54,000 square feet of restaurant and office space.

PC Urban Properties Corp. is retaining the original art deco facade and adding a four-storey glass office building. The developer purchased the one-block, two-level building at 5th Avenue and Ontario Street for $7.6-million in December of 2014.

For several decades after the war, a local family had owned the building and ran a textiles operation out of it. Because the building was in poor condition, with no parking, it made more sense to sell it off when the family decided to relocate. As well, with real estate at a premium, a low-level building made no sense in the tight eight-by-eight-block area in the heart of the city, which has seen numerous properties snapped up in the past year. 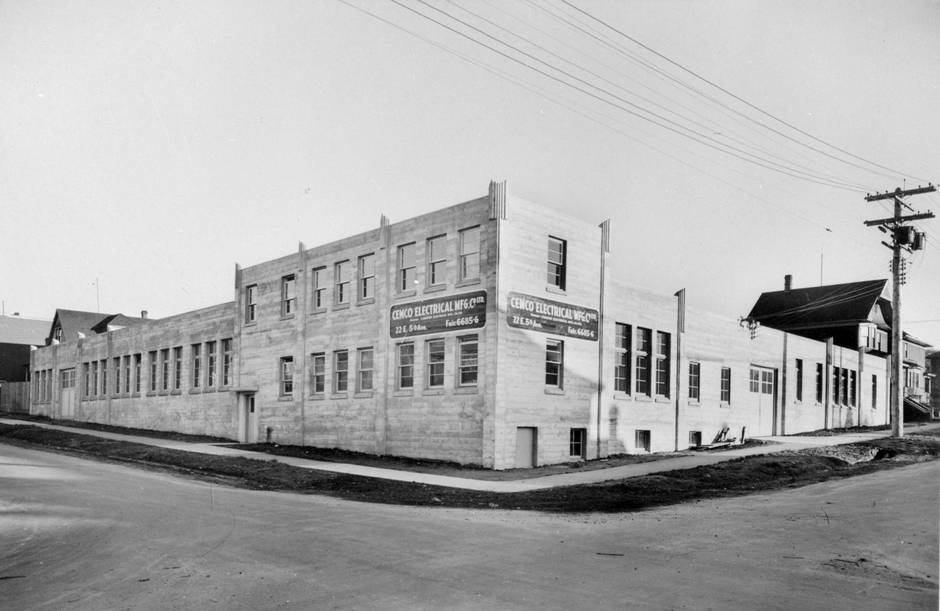 The Cemco Electrical Manufacturing Co. factory in Vancouver opened during the Second World War and made radios and radars for ships.

PC Urban principal Brent Sawchyn says his firm didn’t realize the historical importance of the concrete building when it purchased it.

“We thought it was a somewhat dowdy building thrown up in the forties without really appreciating how it got there and why it was built,” Mr. Sawchyn says. “Then we learned they were building radio and [ship] radar equipment under cloak and dagger for the Allied war fleet.”

It was the design of Australian architect Henry Holdsby Simmonds, who made a career out of designing theatres, facility buildings and apartment blocks for the city.

During the thirties and forties, with building materials scant, he built several board-formed concrete facility buildings, such as the big buildings at the Pacific National Exhibition. His best-known work is the Stanley Theatre, which still operates as a live stage theatre on Granville Street. He built the Cemco Electrical Manufacturing Co. factory – now the Lightworks Building – in 1942, at the peak of the Second World War. At the time, industries in the area would have been booming.

With all the men overseas, the factory would have been filled with female workers, seated at big benches.

With the encouragement of city planners, PC Urban chose to honour that period in Vancouver history by restoring the art deco facade. The plan is to lease the 8,000-square-foot ground level to a hip restaurant, in keeping with the vibe of nearby Main Street, and then lease the remaining 47,000 square feet to either one tenant or several tenants. However, if a tenant should come along that wants the entire 54,000-square-foot space, that would be an option, too, says broker Matt MacLean of Cushman & Wakefield, which also acted as the selling agent. 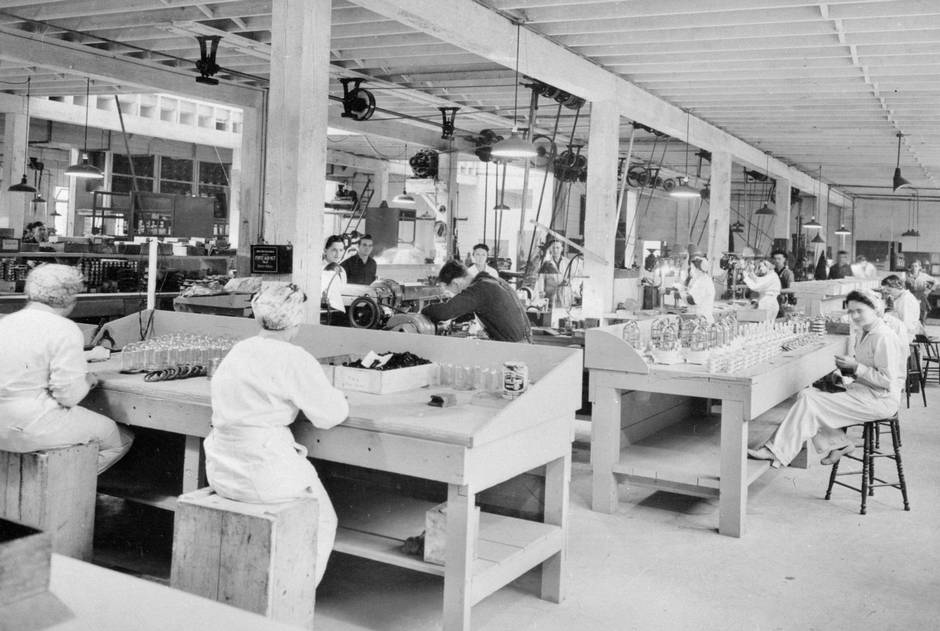 With many men away at war, the Cemco plant was staffed by female workers.

“We don’t have an anchor at the moment, but we have several groups circling around,” he says. “We do have multiple offers on the ground floor component, which we are dealing with now.”

The trick, he says, is explaining to some tenants that the neighbourhood is still in transition from a former dead zone to an active destination neighbourhood. The Olympic Village to the north has brought density to the area, as have large developments around Main Street to the east. That new density can support restaurants catering to a dinner crowd. There are already restaurants scattered in the area, which has a hodgepodge feel to it that is unique to Vancouver. Mr. MacLean compares it to small creative districts you would find in Austin, Tex., or San Francisco.

“Retailers are always looking at pedestrian traffic, and asking, ‘How exposed am I?’ But this will be a destination area and in time it will become more densified.”

Small and mid-sized businesses have been particularly attracted to Mount Pleasant because of industrial property taxes that are lower than pricey downtown districts such as Yaletown or Gastown. As well, rents are about one-quarter lower, although that will probably change.

“It’s been a very popular niche market for developers, investors and owner-users – the desire has been insatiable,” says Mr. MacLean.

Hootsuite is a famous technology owner-user in Mount Pleasant, and the company has plans to build a campus-like city block development that would attract other tech companies. Already, some have nicknamed the area “Mount Pixel.” But operating more discreetly, there is a mix of other industries moving into the area, says Mr. MacLean. Film industry companies with major U.S. studio clients work in the area, including Double Negative, Imagine Engine and Gener8. Clothing companies Kit and Ace and Oak + Fort have headquarters there. Architect James Cheng, famous for the Shangri-La towers in Vancouver and Toronto, is one of several architects with offices among the tightly packed buildings.

Mr. Sawchyn says it’s the mix of old and new that draws them. “Oftentimes if something is brand new, it’s pedestrian and nondescript, but when you see something older, it makes you take pause.”

There are only a few historic industrial buildings left in Mount Pleasant, which is why heritage consultant Don Luxton, who worked on the project, says he was “pleased” with the Lightworks design. Facadism, where the facade of a building is designed or constructed separately from the rest of a building, isn’t usually the first choice when doing a heritage preservation project, but because the building was in poor condition, it worked.

“There usually isn’t a commitment to keeping the buildings, but with the Lightworks project, that’s a happy marriage of use and intent,” says Mr. Luxton. “At least the essential heritage character of the site will be preserved, so that’s a good start.”

There are also some old craftsman houses that remain from the early days, painted in traditional bright colours. People still live in them, but the properties are vulnerable to redevelopment now that Vancouver’s property prices have skyrocketed. They’ve been on Heritage Vancouver’s top 10 endangered-sites list for several years.

Mr. MacLean would also like to see them saved and perhaps repurposed as commercial properties such as restaurants, law firms and architect offices.

“I love the look of those houses, and I would love to see the city relax zoning on them, to have some amenity to fill those spaces rather than just grandfather residential. Bring those houses back to a better form and retain those heritage qualities, and get variances on what could go in there.”

Several Simmonds designs around Vancouver have already been torn down over the past several years. The Lightworks Building speaks to a period of wartime austerity that needed to be recognized, says Mr. Luxton.

“Simmonds could do high-style art deco, no problem. But by the time they built these buildings, they didn’t have the budget. The architectural elaboration is pretty minimal, but still it’s pretty interesting. It is a nod to that art deco style and it has some character and elaboration to it that are typical and indicative and certainly speak to austerity.”

As well, the revitalization of Vancouver’s urban industrial zone means the area has come full circle, says Mr. Sawchyn. In the thirties and forties, it would have been the manufacturing heart for the most advanced technology at the time. The creative class has returned, albeit with “industry” redefined as office-based companies, a demographic that is well suited to the surrounding dense neighbourhood and available transit.

There are two SkyTrain stations close by to support workers. The clanging production lines of traditional industries have mostly moved to more economical suburban areas. However, the area is surrounded by a clutch of craft breweries that make and sell their product to an eager young market, which adds to the youthful vibe of Mount Pleasant.

Mr. MacLean is not worried that the area will lose its charms in the mad investor-buying frenzy. Already, he’s seeing signs that the profit margins are starting to diminish in developing office space. Rents can only go so high. As well, because the majority of lots are small, and owned by many long-time owner-users, it’s “nearly impossible” to assemble several lots into one major development. Lot size is a barrier to big scale projects.

“The beauty of why this neighbourhood will remain is you will continue to see high-level sales here, from a group that wants to be here and spend money repositioning buildings to look cool, or from someone who wants to build small,” says Mr. MacLean. “They want to be surrounded by industrial buildings and have a weird little retail component. It will add to that hodgepodge of eclectic architecture.”