The building at 950 West Broadway in Vancouver is unremarkable, a two-storey concrete structure that is home to an IHOP, a Japanese restaurant and an insurance broker, among other things.

But it sold last May for a phenomenal $46-million, according to B.C. Assessment Authority records, even though it had been assessed at just $18-million. It was the latest record-breaking sale in what has been a year of high-water marks for commercial properties along Broadway.

Why so high? As Colliers, the agency listing the property, put it: “Without question, the highly anticipated UBC-Broadway Rapid Transit Line has placed a spotlight on West Broadway and amplified demand for land and investment assets.”

That sale and others demonstrate the impact that a future transit line – even one that has no confirmed funding or firm completion date – can have on an area. 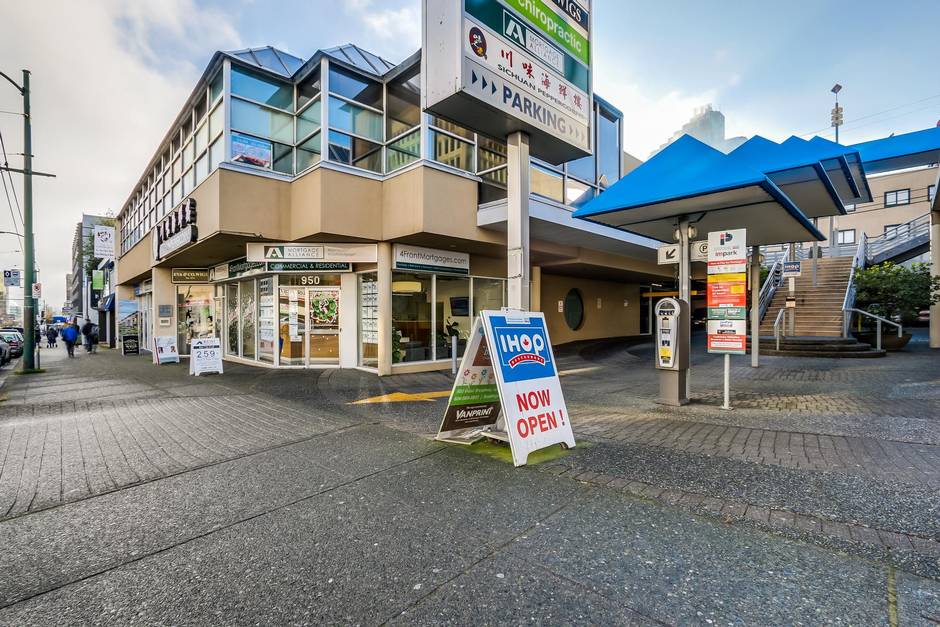 The commercial building at 950 West Broadway sold last May for $46-million, according to B.C. Assessment Authority records. (Colliers)

“There’s been a land rush on Broadway,” says Jon Stovell, the chair of the region’s Urban Development Institute. “Developers have been purchasing with an expectation it will be one of the densest areas in the region.”

That’s all in anticipation of the extension of the Broadway SkyTrain line from Commercial Drive in the east to Arbutus Street in the west, a plan that has been talked about for a couple of decades.

If built, the line would serve a corridor that has been called Vancouver’s third downtown, a long strip that is already packed with medical offices, restaurants and stores. Some parts of it have office towers already, especially near Vancouver General Hospital, but much of it is unprepossessing and low-rise. 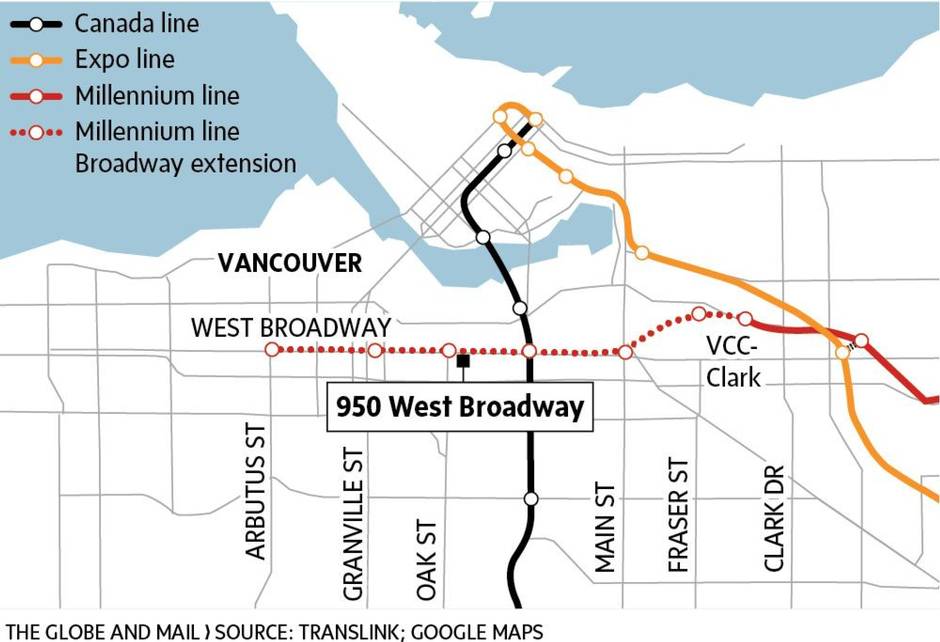 But hopes are high that the new transit line will actually happen this time, after Prime Minister Justin Trudeau made specific promises about transit funding for Broadway during his campaign last fall.

So far, only initial planning money has been committed. Everyone is now waiting for what’s called the second-phase funding, which is supposed to be negotiated this fall in anticipation of a much bigger commitment to transit projects across the country by the Liberals in their second budget next February.

Even when that comes through, though, it could be as much as a decade before the Broadway extension opens.

As well, it’s unclear at this point whether the city will rezone the area for more density. At the moment, much of the central corridor is zoned to allow for buildings that are equivalent to just three times the lot size. 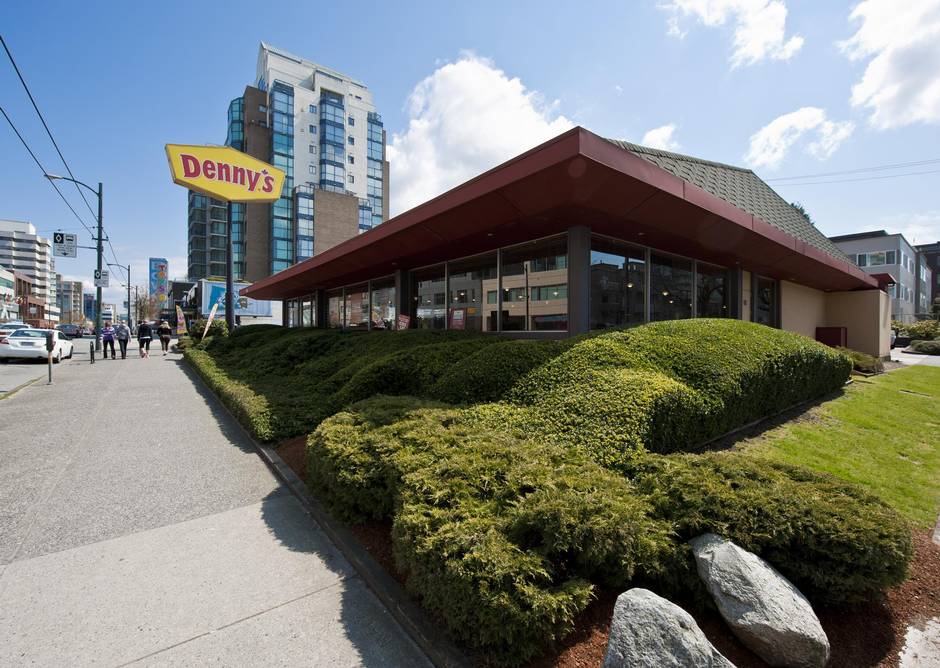 A long-established Vancouver family, the Pappajohns, snapped up the Denny’s restaurant site on West Broadway this year for $26-million. (Colliers)

“Once we have confirmed funding and an annual project, we’ll engage in a planning process,” says Jane Pickering, Vancouver’s acting general manager of planning. “Around transit stations, it’s pretty clear there will be some densification.”

One area that does have the green light for greater density is around the existing Commercial-Broadway station, the second-busiest in the transit system. Increased density around that station was recently approved as part of the Grandview-Woodlands community plan, which is mapping out what services are needed as the neighbourhood grows by 10,000 people over the next 25 years.

There is a Safeway grocery store with a large parking lot next to it, where developer Ian Gillespie of Westbank Corp., who has worked with Safeway on other projects in the past, is in the midst of designing a new complex of towers with residential and office space.

Mr. Stovell says he’s certain the province, which has to commit to millions of dollars in funding, along with the federal money, for the project to proceed, will be pushing the city to allow more density. 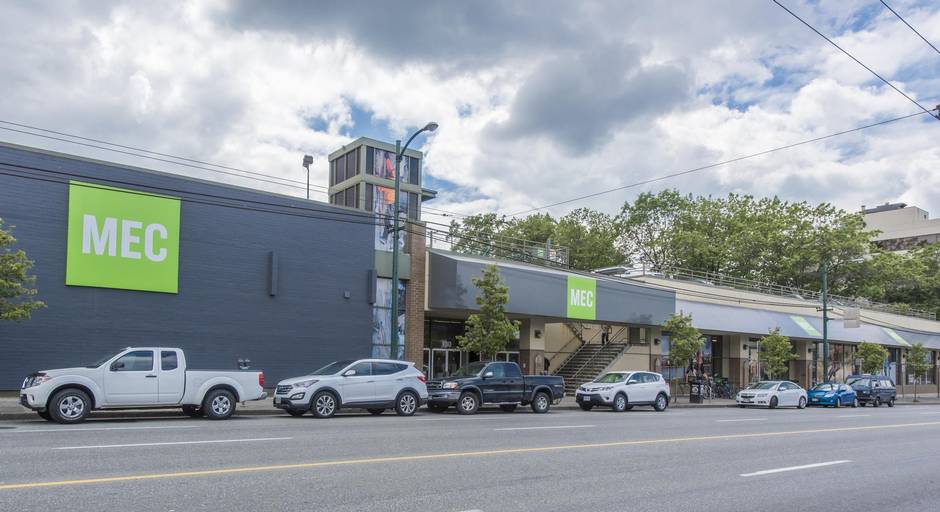 Reliance Holdings acquired a large West Broadway site, which includes the current Mountain Equipment Co-op store that is due to move in a couple of years. Plans call for rental units on the site. (Colliers)

“Clearly, the province is convinced the Broadway line has to go along with densification. They’re not going to allow what happened on the Expo line again,” he says.

The city’s first transit line opened in 1986 – the Expo line ran from downtown Vancouver to Surrey – and is remarkable for the low density of development that still exists around its stations 30 years later.

But there are no firm guarantees on exactly what density will be allowed.

That’s not stopping property buyers, though.

The prospect of a new transit line along West Broadway has made commercial buildings more appealing to developers. (Colliers)

Mr. Stovell’s company, Reliance Holdings, acquired a large site eight blocks east of the IHOP restaurant, the current Mountain Equipment Co-op store that is due to move in a couple of years.

The property, currently valued at $47-million, was acquired by his company last June for a price that doesn’t appear in B.C. land records.

Another noted land deal along the corridor was the purchase by the long-established Vancouver family, the Pappajohns, of the Denny’s restaurant site on Broadway three blocks west of the IHOP site.

That was purchased for $26-million, double the 2015 assessed value, in February this year.

Besides those purchases, the City of Vancouver and TransLink, the transportation agency that will be building and operating the Broadway line, have bought pieces of land at key locations, several sources say.

But one problem with the early buying at high prices is that it may actually hinder development, at a time when Vancouver is suffering from a severe squeeze on housing. Both house prices and rents have been soaring in the past year, as existing and new residents, along with investors, have competed hard for the slow-growing supply of housing.

Some of the current speculation is “stripping more supply out of the market,” says Avison Young principal Mehdi Shokri. “Transit is supposed to be helping spur development, but we’re going to find we’re adding more pressure to the supply problem,” he says.

As a result, he says, sites west of where the new line is supposed to stop are seeing more development activity because builders there know there is likely to be no change, so they’re proceeding on the basis of the current zoning.

But in the hot new transit-line area, people are holding off.

For example, the buyer of 950 West Broadway is a company called Hometop Enterprises that was created just last February.

The company’s incorporator is Bao Meng Wen, with an address in the city’s upscale Kerrisdale neighbourhood. The company does not appear to have any development experience.

New purchasers like that feel that they can only get a return on the high prices they paid if they get considerably more density – and will wait however many years it takes to get that, says Mr. Shokri.

Mr. Stovell adds, “We won’t see a lot of projects breaking ground until there is clarity on the zoning.”

But he expects it will go quickly after that. He is hoping to build a large rental project on the MEC site and anticipates that others might do the same.

“One of the things I think you’ll see out of the gate is a lot of rental. Rental works in the current market.”