When architect Franc D’Ambrosio came to Victoria in 1989, buying a good cup of tea was a piece of cake. Coffee addicts, on the other hand, didn’t fare so well. “There was only one place where you could get a decent espresso in downtown Victoria,” Mr. D’Ambrosio recalls. Today, B.C.’s capital city is awash in trendy coffee joints, edgy clothing stores, tattoo shops and Canada’s highest per capita number of medical marijuana stores, one for every 3,330 people.

There are other changes afoot, too, in the once-dowdy city, as a flurry of condo and apartment construction delivers sleek new housing, anchored by ground-floor commercial services. “There are more cranes in the ground than we’ve ever seen before,” says Dave Ganong, managing director for Colliers International on Vancouver Island. “Now, we’re seeing a change in the texture of downtown building.”

Mr. Ganong, a transplant from Vancouver in 1983, attributes some of the reshaping to the arrival of Vancouver developers, such as Bosa Properties, Chard Development, Concert Properties and Townline. Bosa, owner of Victoria’s Fairmont Empress hotel, is behind two large condo projects; Chard has completed five condos and is building two more; Concert built five projects and Townline two more, with two in the works. 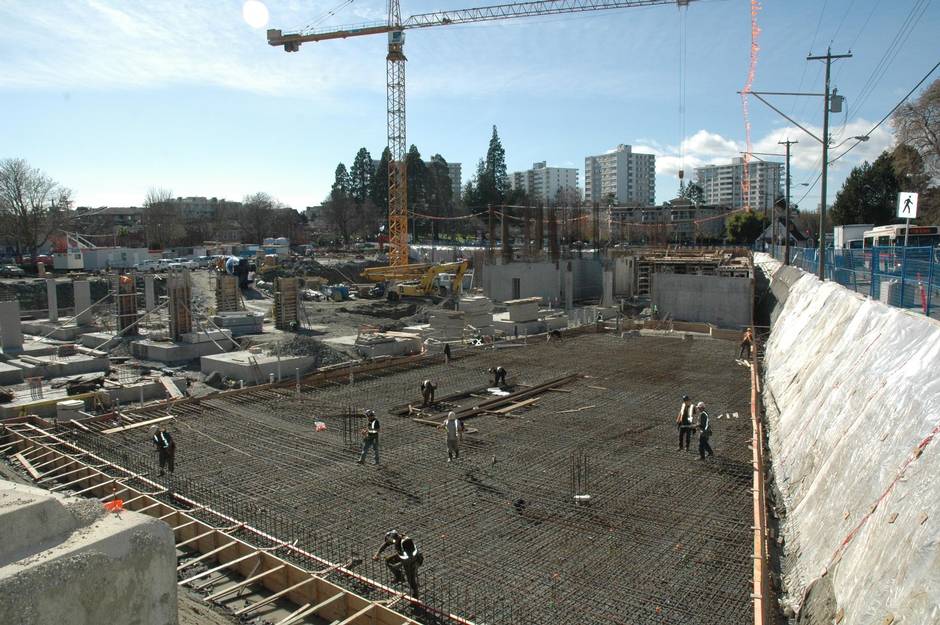 One other large project, a joint venture between Victoria-based Jawl Properties and Concert, is Capital Park. Almost a full city block, behind the legislative buildings, it features approximately 235,000 square feet of office space in two buildings, retail space and a planned four other buildings with approximately 200 units of rental and condo housing. Jawl is also building at 1515 Douglas St., where a six-storey and a 13-storey tower are rising. Already, Capital Park is 100-per-cent rented by the provincial government while 1515’s 287,000 square feet of office and retail space is filling fast, Mr. Ganong says.

The rash of development isn’t by coincidence. In addition to the Vancouver developers’ influence, “There’s been a change in the mindset of how the city deals with the development community,” says Mr. Ganong.

Since taking office in December of 2014, Mayor Lisa Helps and her council have been on a residential tear, often approving a new downtown residential development about every two weeks, she says. Her vision is to attract more downtown residents who, in turn, need more services. Victoria is home to about 85,000 of Greater Victoria’s 360,000 residents. 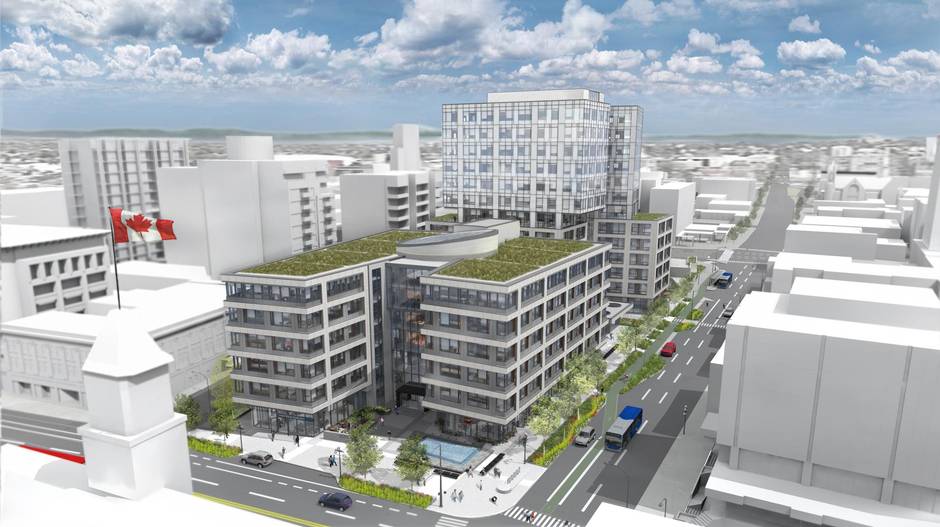 The 1515 Douglas complex will have 287,000 square feet of office and retail space when complete. Space is said to be filling fast. (D'mbrosio architecture + urbanism and Jawl Properties)

The city’s efforts, such as “density bonusing,” which allows for construction of a greater number of residential units in return for a developer’s agreement to provide community amenities such as parks or streetscape improvements, and a willingness to work with younger, green-leaning entrepreneurs, seem to be bearing fruit.

A few years ago, storefront vacancies in the downtown were at 11 per cent and reminiscent of a ghost town in some areas, Mr. Ganong says. The rate has dipped to about 9 per cent.

Another strategy has been courting out-of-town investors. In February, the city played host to a delegation of about 30 investors from San Francisco, Portland, Seattle, Vancouver, Calgary, Winnipeg and Toronto. “They told me, ‘Wow, your city is doing a great job of blending the old and new,’” Ms. Helps says. The monied visitors were escorted around offices of the city’s tech startups and tourism-related businesses, Victoria’s two biggest industries where growth continues to be encouraged.

With an active heritage preservation community keeping watch, Victoria’s politicians are keenly aware that downtown’s historical landmarks should not be razed and forgotten as they have been in cities such as Vancouver and Calgary. Two recent downtown condo projects, The Janion (Reliance Properties) and Union (Anthem Properties), have preserved building facades. As millennials and retired downsizers decamp into the core, the cliché about Victoria being home of the “newlywed and nearly dead” is being laid to rest, Ms. Helps says. 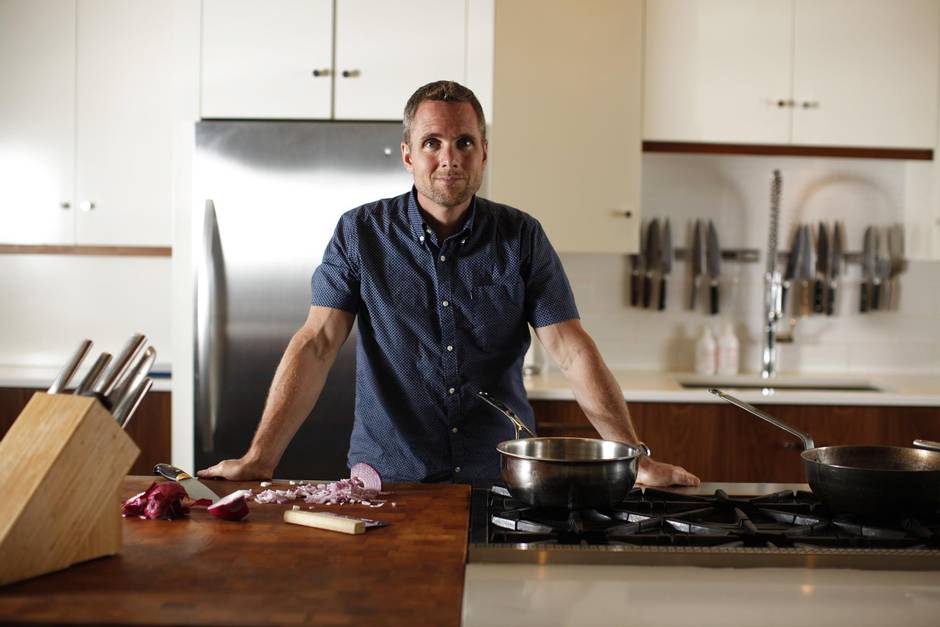 Jed Grieve, whose Cook Culture shop is located in the Atrium, says the new building in Victoria has attracted local businesses like his with reasonable rents. 'They could have easily charged an extra 30 or 40 per cent for the space. But, they didn’t want a Cactus Club or Starbucks [as tenants].' (Chap Hipolito for The Globe and Mail)

Driving Victoria’s ascendance is the tech industry, now said to be bigger than tourism. “There’s a concentration of tech people working in the downtown,” Mr. Ganong says. Well-paid, well-educated and with an appetite for the good life, they want to live and work downtown. Instead of driving, they cycle, which has spurred Victoria’s sometimes controversial push for abundant bike lanes.

A September of 2015 report from Colliers found that in downtown Victoria, technology and digital media rent about 91,000 square feet of space, second to government, at 111,000 square feet. 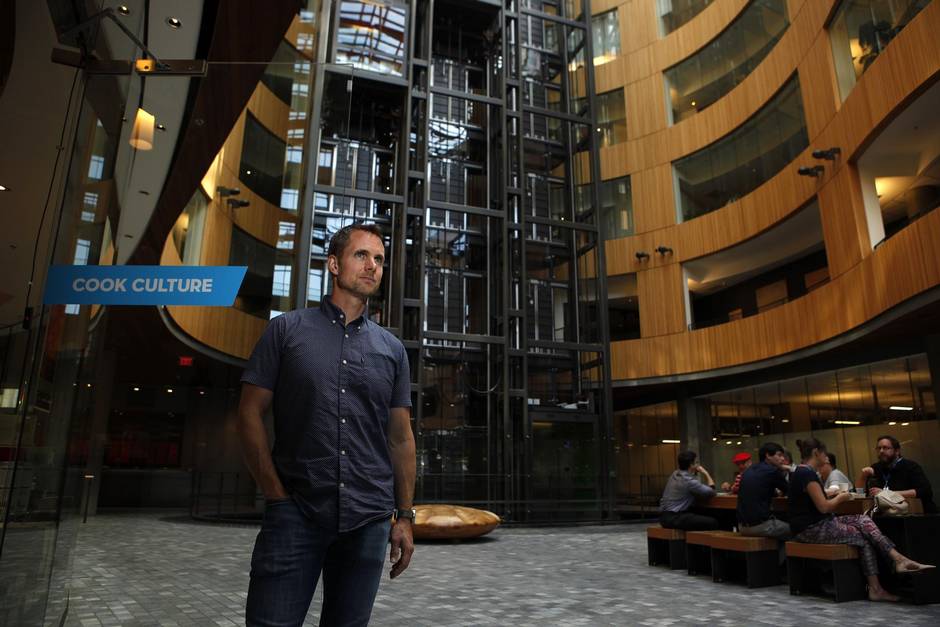 The six-year-old Atrium, home to Mr. Grieve's Cook Culture shop, has reinvigorated an area of Victoria once known to be seedy. (Chad Hipolito for The Globe and Mail)

While downtown Victoria is somewhat hemmed in by its geography, with water on two sides, the downtown’s compact nature lends itself to sustainable building. His firm, D’Ambrosio architecture + urbanism, designed the project, which is often said to have launched downtown Victoria’s resurgence, the seven-storey Atrium. With a light-flooded inner courtyard that draws people to the building, the Atrium has buried some of the area’s seediness and shifted the downtown dynamic north. “Investment in good building becomes a catalyst for urban repair and renewal,” says Mr. D’Ambrosio.

Jed Grieve has owned his 2,700-square-foot Cook Culture store in the Atrium since 2010, selling high-end kitchenware and offering cooking lessons. The businessman recalls how easy it was to buy illicit drugs in the area, pre-Atrium. He credits Atrium’s developers, Jawl Properties, for creating a lofty downtown standard and avoiding a cookie-cutter landscape.

“They could have easily charged an extra 30 or 40 per cent for the space. But, they didn’t want a Cactus Club or Starbucks [as tenants]. They wanted mom and pop businesses,” Mr. Grieve says. “The Jawls have an amazing understanding of Victoria.”

Despite Victoria’s continuing facelift, one growing downtown blemish has enraged local residents, spawned opposition groups and riled the tourism sector. Since last fall, Tent City, behind Victoria’s courthouse, on provincial land, has been home to roughly 125 people, who in an April Supreme Court decision, were told they could stay put. On June 3, the provincial government applied for a second injunction to evict the campers after fire and safety problems came to light.

“It’s an issue every city deals with. You can build 1,000 homeless units, but you’ll need more,” Mr. Ganong says. The need mirrors the appetite for new condos, with many of the ones being built already 60 to 70 per cent sold or fully rented. “They won’t sit vacant,” says Mr. Ganong.