The Boundary Bay Industrial Park, which the Dayhu Group of Cos. opened three years ago in Vancouver, has two buildings that are each 36 feet high – a jump from the standard 26 feet in the region.

It has always seemed like the ideal solution to Vancouver’s shortage of industrial land, one that is talked about as an impending crisis.

Densify. Build higher. Build two- or three-storey industrial buildings, planners have urged, reminding everyone that developers around the rest of the world are doing it.

A recent report from Britain-based TechNavio identified multistorey warehouses as one of the hot new trends in China. And an international company, which is building one of those warehouses in Shanghai, has also just broken ground on an 85-foot-high warehouse facility in Seattle, 220 kilometres south of Vancouver. The Prologis building will be the first of its kind in North America.

Vancouver, where the prices of industrial land have gone up along with the prices of residential land, seems the most likely city in Canada for this to make economic sense. 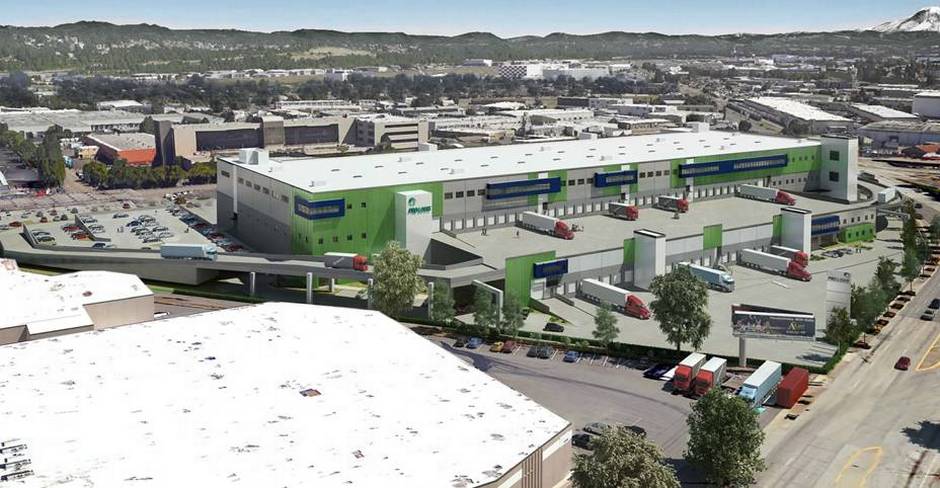 This artist rendition shows how a two-storey warehouse works. The building must include a long, gently inclined ramp that allows the container trucks to climb easily to a second-floor concourse where they can park, turn around and back up to loading bays. (Prologis)

But the man whose company has built the region’s tallest industrial building so far says that, although local developers and commercial brokers are carefully watching all those trends, there are challenges in Vancouver that Seattle or Shanghai don’t have.

“I think Vancouver ultimately will have something similar but I don’t think we’ll see it in the short term,” says Paul Tilbury, chief operating officer of Vancouver’s Dayhu Group of Cos. “But we’ll see how the tenants in Seattle react to the availability of that kind of space there.”

Dayhu has conducted the most adventurous experiment locally in industrial building. Its Boundary Bay Industrial Park, opened three years ago, has two buildings that are each 36 feet high – a jump from the standard 26 feet to, at most, 32 feet for industrial buildings in the region.

That kind of height has been made possible because of the new technologies available for warehouses, says Mr. Tilbury.

In one of the buildings, which has been leased by TJX Canada’s Winners, the company installed three-quarters of a mile of conveyor belts and uses a specialized system to guide their forklifts.

“That allows their forklifts to be more precise and it allows driverless forklifts to work to the full 36 feet.”

That rise in the use of technology is something TechNavio also identified as an emerging trend in China, where labour costs have been rising rapidly.

It noted that the huge e-commerce company JD.com has opened a warehouse in Shanghai “where items are picked from shelves, packed up, and sent to distribution points, completely by machine alone.”

But the moves in China to multistorey warehouses are dramatic, as land costs in increasingly packed cities such as Shanghai and Beijing have increased and are expected to rise by as much as another 10 per cent in the next few years.

The response, according to a TechNavio report: “Goodman Group , the second-largest logistics developer in China, launched a 1,184,030-square-foot multistoreyed warehouse in Shanghai’s Qingpu district in 2016. Similarly, Prologis , a global leader in industrial logistics real estate, has set up a multistoreyed warehouse with space of 1,067,780 square feet at Beijing Airport Logistic Park in 2016.”

But China is not the only crowded place. 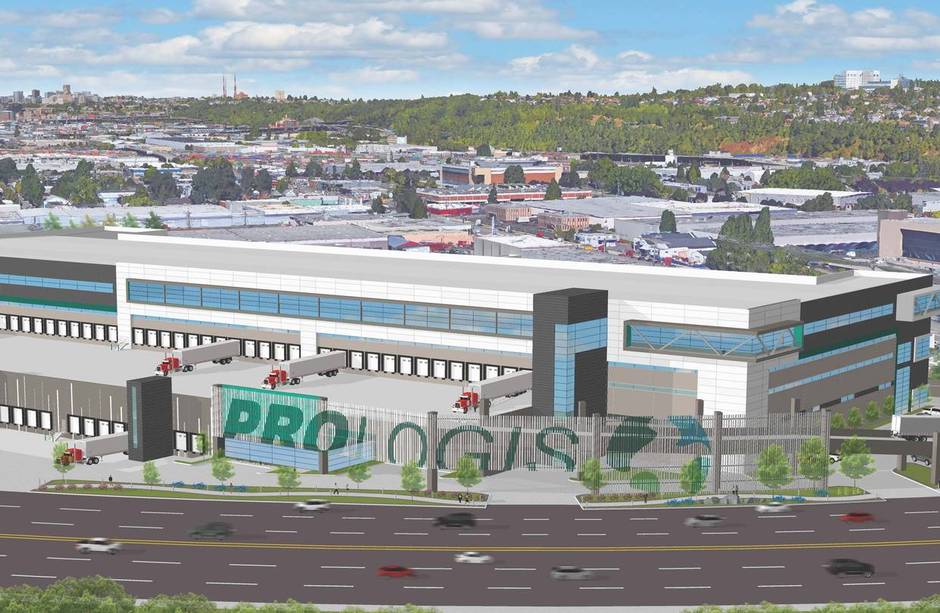 The idea of driving a container truck up to a second floor may be novel for North American operators. It’s also more complex than it would be in Asia, where the industrial trucks are smaller than the standard 53-foot length on this continent. (Prologis)

And this month, Prologis, the largest owner of industrial land globally, was to break ground on an 85-foot-high facility in Seattle. The San Francisco-based company thinks it’ll be doing more.

“One thing that we’ve seen is the urbanization. People are moving back to the cities everywhere and the desire of our customers is to be close to the population,” says Dan Letter, the San Francisco-based managing director of capital deployment for the company’s Northwest sector. “We are running out of space in cities, so our solution is we’re building up.”

The demand to be close to cities is especially true with the rise of e-commerce, which relies on being able to deliver products quickly to customers in large urban areas.

In Seattle, says Mr. Letter, the decision to move ahead with the company’s first multistorey project on the continent is “really driven by land values. Rents have skyrocketed and vacancies have dropped to all-time lows.”

Mr. Letter says the company created the concept of the multistorey industrial building, so adapting it for Seattle will be relatively easy.

One thing that is key to the 580,000-square-foot Seattle project, which is being built in the southern Seattle neighbourhood of Georgetown, a mix of old industrial with a small cluster of hipster stores near a former brewery, is having a piece of land large enough for the design. The Prologis site is 13.5 acres.

That’s because the multiple storeys are only possible, he says, if the building includes a very long, gently inclined ramp that allows the container trucks to climb easily to a second-floor concourse where they can park, turn around and back up to loading bays. That is more important than any technology solution.

Mr. Letter acknowledges that the idea of driving a container truck up to a second floor will be novel for North American operators. It’s also more complex than it would be in Asia, where the industrial trucks are smaller than the standard 53-foot length on this continent.

On the other hand, some things won’t be so different. “In San Francisco and Seattle, you’re navigating hills anyway. And, even in flat areas, you have elevated ramps to highways,” he says.

All of that doesn’t seem so impossible for a Vancouver builder, at first glance. But those in the know say there are hidden complications.

One, the soil conditions in many parts of the region with industrial land available are challenging for anyone building something bigger and heavier.

“We have a lot of people locally looking at this, at what are our options for going a bit more vertical,” says Chris MacCauley, a senior vice-president at the CBRE brokerage in Vancouver. “For every four feet you go higher, you get 16 cubic feet of space, so a lot of them are looking at it.”

But, he says, the soil conditions in Delta – partly formed by deposits over the centuries from the Fraser River – and along the banks of the river, which have big pockets of land zoned industrial, are poor. “We wouldn’t be able to put that kind of big building in our industrial-zoned land.”

The same would be true for Vancouver’s False Creek Flats, a central industrial area that was created by filling in part of the inlet early in the last century.

He also notes that these kinds of buildings don’t work for every industrial use.

“Amazon and e-commerce, yes. But it wouldn’t work for manufacturing or any sort of thing that’s labour intense.”

As well, says Mr. Tilbury, building a large facility like the Seattle Prologis one would require a huge amount of land. And that’s one of the biggest difficulties for industrial developers now – finding anything that big or several parcels that are contiguous that could be joined.

Ultimately, he says, Vancouver might see more multistorey buildings on industrial land soon, but of a different kind.

Instead, buildings that have one floor of industrial use on the ground level and then office spaces above are the more feasible option.

That’s a concept that has been taken up enthusiastically in Vancouver’s Mount Pleasant industrial area, where a new set of zoning rules adopted a few years ago allowed for that. New buildings are proliferating that have shoe-distribution facilities on one floor, for example, and accounting offices above.

“You’re more likely to see that,” says Mr. Tilbury, “before the Prologis model.”