As head of North America’s largest transit system for two years, Carmen Bianco knows a thing or two about getting people to work and back.

The former president of New York’s Metropolitan Transportation Authority, which shuttles more than 8.7 million passengers around daily on its buses and subways, Mr. Bianco is also entirely in tune with the concept of how transit can shape a city and its outlying areas.

“We’ve seen it time and time again, you build the transportation system, people follow and communities start to build up, schools start to build up, and it’s the perfect thing,” says Mr. Bianco, who founded his own consultation company, Bianco Associates, upon leaving the MTA last August.

A frequent visitor to Toronto for work, Mr. Bianco has looked on with interest as the Greater Toronto Area continues to build up and out.

Transit-oriented developments such as Mount Pleasant Village in Brampton and the pending Stationwest in Burlington, both built around Go Transit railway stations, offer people the option of relatively affordable homes outside the city, without the need to rely on cars to get to and from work downtown every day. 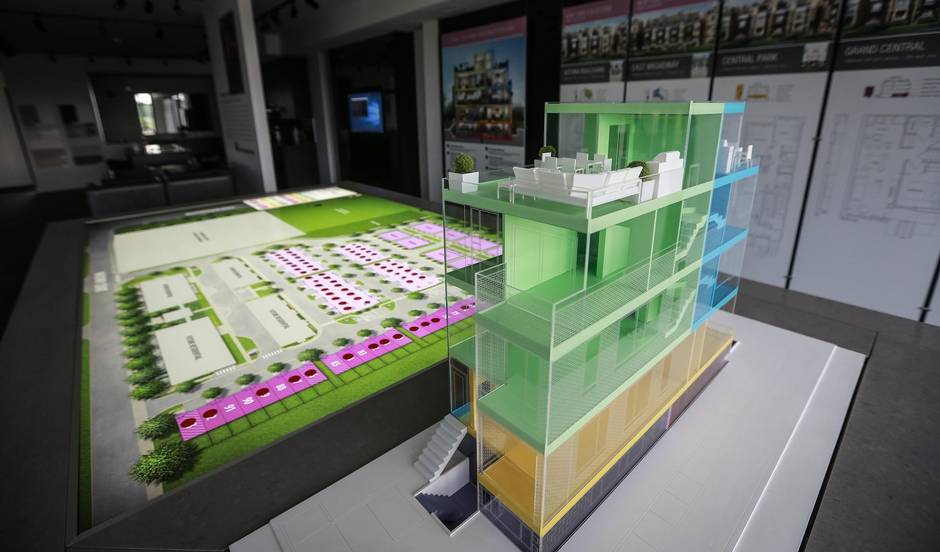 Plans call for the Stationwest development in Burlington, Ont., to have 1,200 residential units and retail space upon completion by 2021. (Glenn Lowson for The Globe and Mail)

According to Mr. Bianco, they are a key cog in the development of the GTA and Southern Ontario’s Greater Golden Horseshoe as a whole, whose population is expected to grow to 13.5 million by 2041.

The Stationwest development hasn’t occurred without hiccups. The original Phase One plan, which called for 324 three-storey townhouse units built around Burlington’s Aldershot station, was criticized in public meetings a couple of months ago for not providing enough density. The developer, Adi Development Group, responded by increasing the number of residential units to 428, adding some condominium apartments in two six-storey towers. 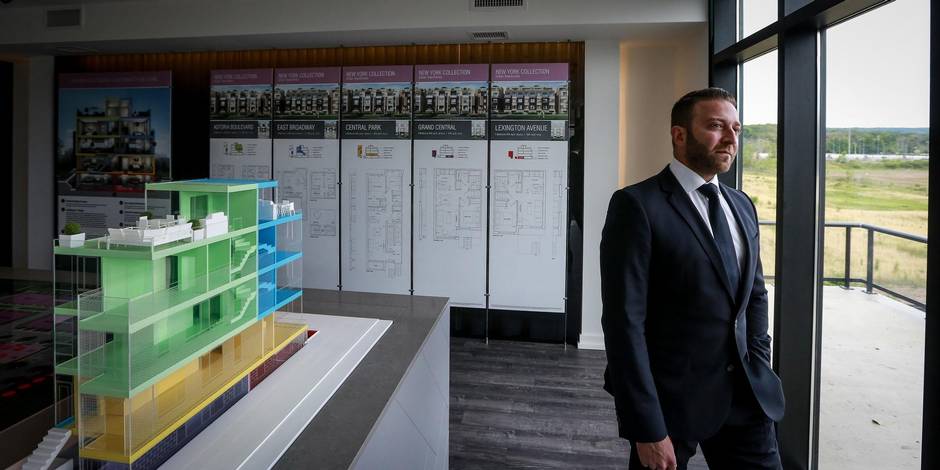 Tariq Adi, the chief executive officer of Adi Development Group, says not all millennials can afford to live downtown. So suburban developments like his Stationwest, near a Go Transit station, make sense. (Glenn Lowson for The Globe and Mail)

Increasing density around transit hubs is crucial to the province’s plan to deal with the increased population influx arriving over the coming years.

“The movement thing about millennials wanting to live downtown and all that is great, but the reality is that they can’t all afford to live downtown,” says Tariq Adi, the chief executive officer of Adi Development Group.

Stationwest, which will eventually comprise 1,200 residential units, is built within walking distance of the Go Transit station. The first phase is already sold out, and is expected to be completed by 2019, with the second phase, which will incorporate a retail component, finished by 2021.

“At the end of the day, the goal is connectivity here,” Mr. Adi says. “We want people to connect and then, from an urban perspective, weave a fabric of connectivity into the existing neighbourhood.” 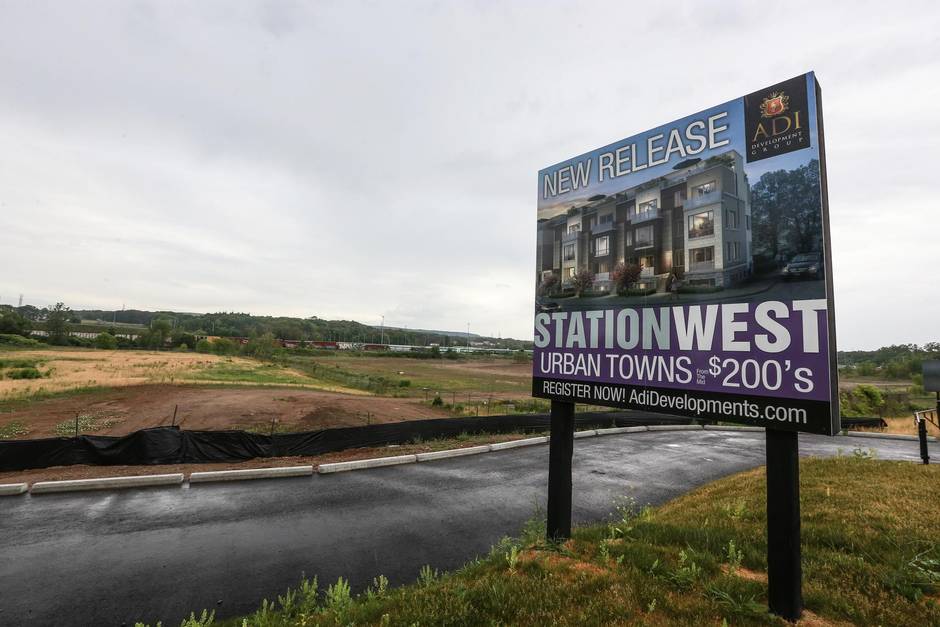 The first phase of Stationwest is to be finished by 2019. Homes will be within walking distance of Go Transit's Aldershot station. (Glenn Lowson for The Globe and Mail)

But getting the right density around these transit hubs is also important. As Cherise Burda, director of the Ryerson City Building Institute in Toronto, says, the province hasn’t done a particularly good job of that in the past.

As an example, she points to subway stations along Toronto’s Danforth Avenue, where most of the buildings are low-density, two-storey constructions. As she says, if municipalities are building subways now under this year’s Proposed Growth Plan for the Greater Golden Horseshoe, they need a minimum of 200 people and jobs per hectare within a 500-metre radius of a station. The current density figures along the Bloor-Danforth east-west subway line range from their highest at the downtown Bay and Bloor stations, where they are 547.8 and 701.5 respectively, to as low as 38.3 at Castle Frank station, with most under the 200 people-and-jobs mark. 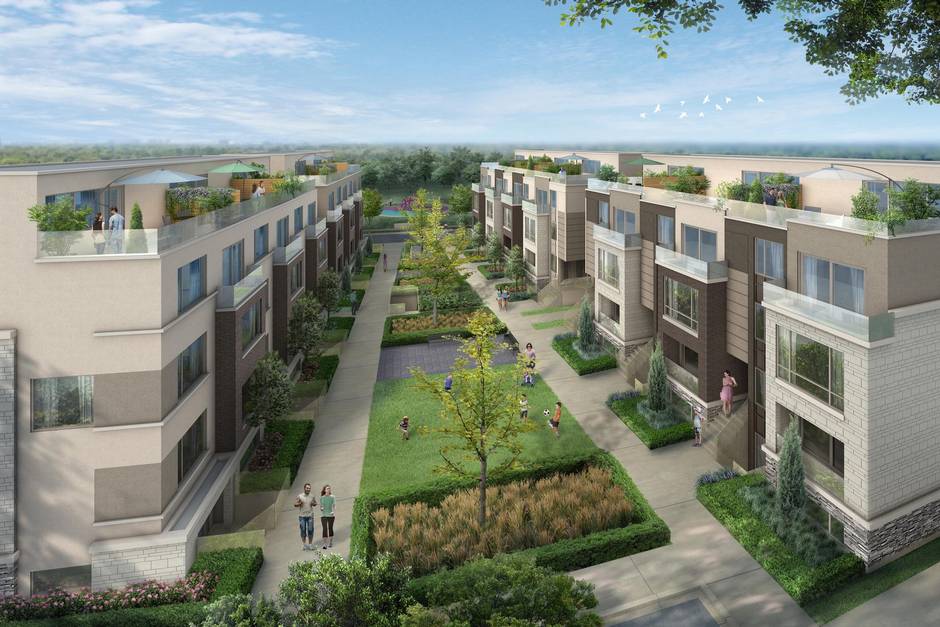 The same criticism has been made against the Scarborough subway extension, a multibillion-dollar project that goes through and ends in low-density surroundings in Toronto’s east end.

Ms. Burda commends the idea of building communities around transit hubs, though given the population influx that is expected, developers must look at intensifying their communities more, she says.

“I’m not talking about building massive high-rises, but mid-size developments that are five to 11 storeys fit nicely into the character of the neighbourhood,” she says. “We need to do more of that because we need to be building up instead of out.”

While the proximity to urban centres is important – Aldershot station is a 45-minute train ride to Union Station in downtown Toronto – for the long-term success of the GTA, building up labour markets in new areas is also necessary.

“We need to build out these hubs as more than just classical bedroom communities, with some bike paths and a yoga studio attached. That’s not going to cut it,” says Roger Keil, York University research chair in global sub/urban studies. “We’re going to have to create employment centres there.”

Failure to do so would simply replicate the same pattern that has been witnessed in the Toronto-centric region for generations, which is the assumption that all the jobs are downtown.

He references last year’s Neptis Foundation report Planning for Prosperity, which revealed an economic landscape distinguished by a large concentration of downtown employment, but also three suburban megazones to the north and west of the city. On top of that, the report also shows five suburban knowledge-intensive districts, or SKIDs. However, according to Mr. Keil, those identified areas are poorly served by the current transit network.

“That’s a real problem if we’re investing billions into building out our mobility network but we’re not building necessarily those transit hubs and those networks where we need them.”

But the GTA is not alone in this regard. Mr. Keil says large cities such as London and Frankfurt have similar challenges.

“Those big financial centres draw a lot into the centre and then they create secondary functions in the region, but those other places are way ahead of us in thinking through what other things one can do with a built-out transit network,” he says.

Building communities around the network will certainly help with the region’s long-term development, though.

“This is not unusual,” says Mr. Bianco. “Even internationally, you go to towns like Shanghai, all of them have faced this and the notion is to start building these communities outside of the cities. Where there’s a lot of space, equal quality of life for those who like that type of thing and people and communities will follow.”