When Toronto developers, designers and dignitaries talk of the nearly completed, on-time, on-budget Pan Am Games athletes’ village, their stature grows an inch. Their eyes brighten. Their patter accelerates.

But there’s something left unsaid, little to no talk of how this may play into a 2028 Summer Olympics bid. Toronto’s Economic Development Committee took a pass last year on a 2024 bid, so 2028 is the next option open.

“There are some things that are starting to come up. In other words, if the Pan Am Games athletes’ village is a big success, then I think people will want to talk to us,” said Bruce Kuwabara of KPMB Architects, one of the two lead architects of the Pan Am village, which will become the new Canary District neighbourhood on the eastern end of Toronto’s downtown. 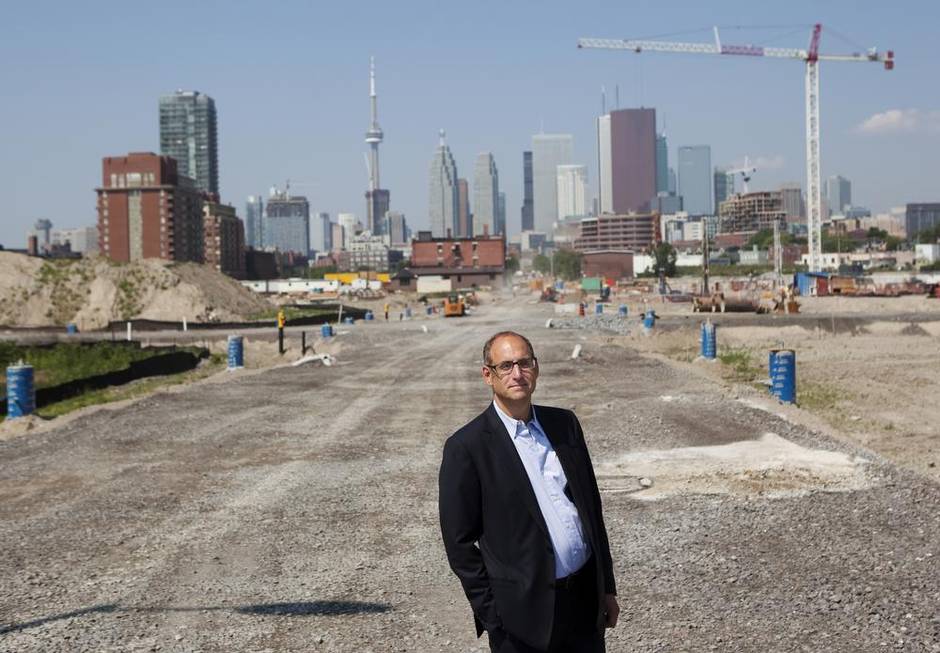 Before: Canary District co-developer Jason Lester in June of 2012 when work began to create a new neighbourhood for the Pan Am Games from former industrial land just east of Toronto’s downtown. (Michelle Siu for The Globe and Mail) 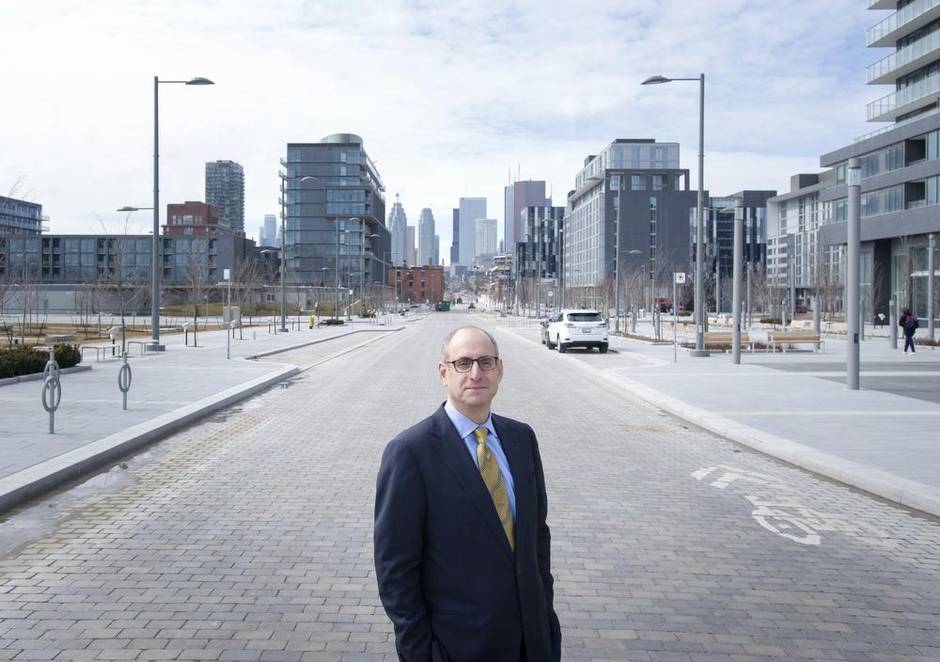 After: Mr. Lester at the Pan Am village in Toronto on Friday. The athletes’ village will become condos, rental apartments and student accommodation when the Games are over this summer. (Kevin Van Paassen for The Globe and Mail)

“If it’s not a big success, we won’t hear from anybody,” he added with clipped laugh.

“This is my own personal speculation,” said Peter Clewes of architectsAlliance, the other lead designer. “I think the whole idea of the Pan Am bid was a way to demonstrate Toronto’s ability to host a major sporting event, such as the Olympics.

“There have been a series of attempts in the past [to get the Olympics], and Toronto has not been successful. It has not even been close. So far, the Pan Am Games, in terms of the development side of the facilities, have gone off with virtually no hitches. It’s on time. It’s on budget. It’s a very Toronto, business-focused initiative, in contrast to what Vancouver did.”

The Games will run July 10-26, with the Parapan Am Games for athletes with disabilities running Aug. 7-15. The village’s development team doesn’t shy away from contrasting their build to the financially mired construction of the 2010 Vancouver Winter Olympic Games’ village.

Following the Toronto games, the athletes’ accommodations will be turned into condos, rental apartments and a residence for George Brown College students, joining the introduction of other apartments blocks, shops and offices in the new Canary District neighbourhood. 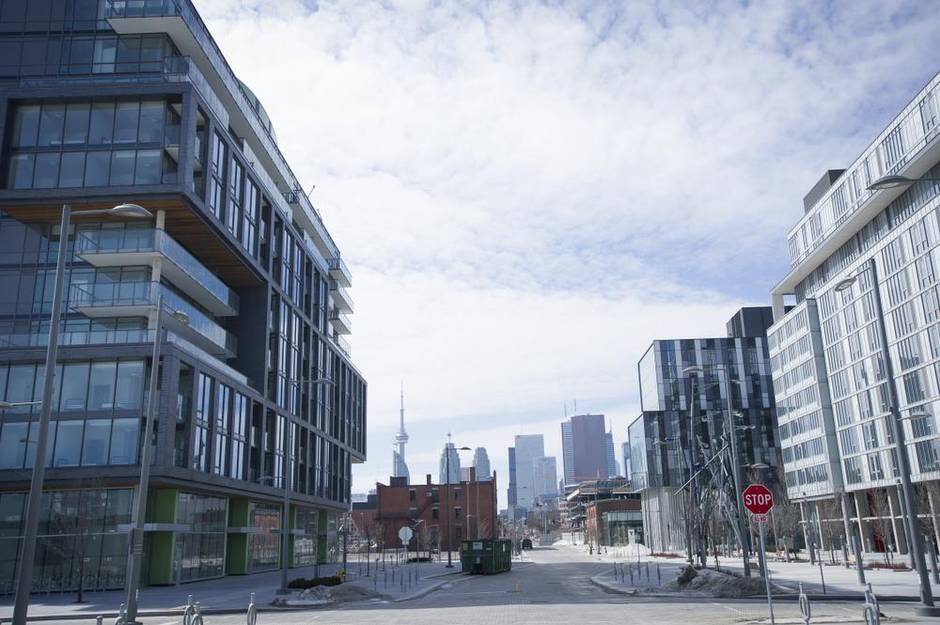 Now: View of the north tower of the Canary District Condominiums on Front Street looking west to downtown Toronto. Retail can be seen at grade. (Kevin Van Paassen for The Globe and Mail) 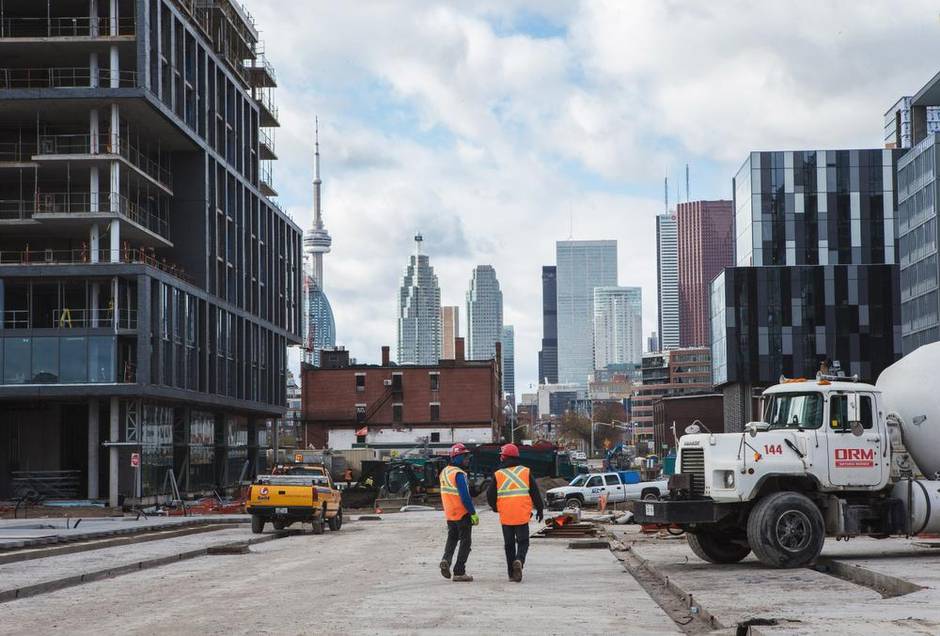 In 2012: Same view of the north tower of the Canary District Condominiums on Front Street during construction. (Jennifer Roberts for The Globe and Mail)

From the start, the winning Pan Am bid centred on creating housing in that community that would sell well in the current pre-sale market. “We knew that any kind of approach and design and thinking on this would be based on how to make the most economical, cost-effective response in the [request for proposals],” Mr. Clewes said.

In Vancouver, site developer Millennium Development Corp. brought in a number of different architects and based the design choices on ambitious sustainability criteria and what might sell later in the market, Mr. Clewes said. On the other hand, in Toronto, although the Pan Am village has been built to a high LEED Gold standard of environmental efficiency, the focus was primarily on what would sell now in the current market, Mr. Clewes said.

“Our approach was what is selling rapidly in the marketplace now. Let’s not take any risks. It’s a really business-focused approach,” he said. The aim was “strategically focused market housing” geared largely to the pre-sale market and tailoring construction to today’s condo pricing.

Mr. Kuwabara added that Vancouver’s higher emphasis on low-energy, sustainable design helped to push the pre-sale price of that housing excessively high. Although now seen as a thriving section of False Creek, praised for its green construction, the city had to take over the development of the village when Millennium went into financial trouble in the wake of the 2008 economic crisis. 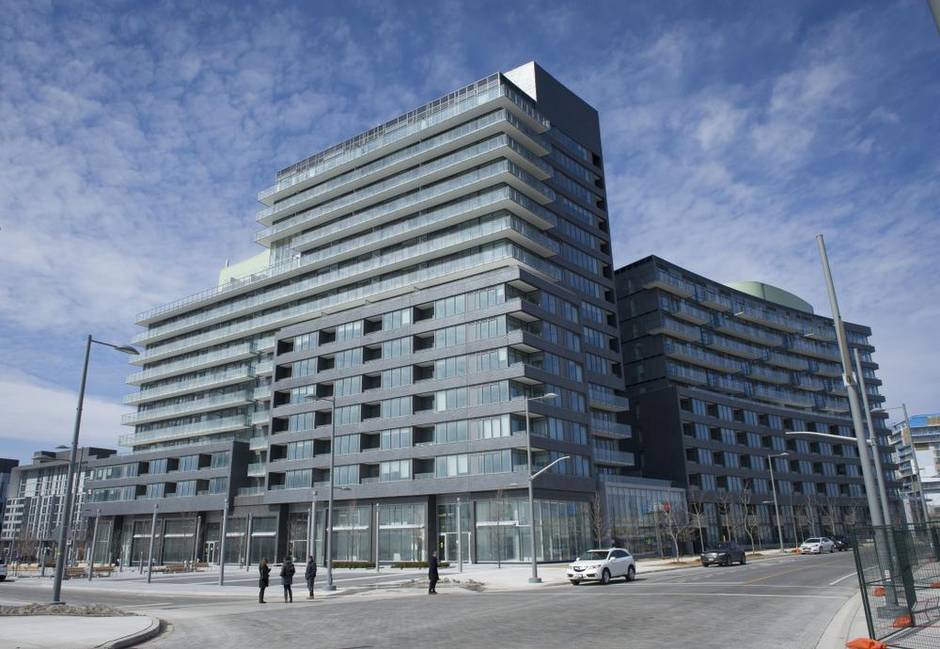 View of the south tower of Canary Park Condominiums on Front Street. Restaurant retail can be seen at grade, as well as the Front Street promenade. Each condo building is comprised of two towers atop a podium. (Kevin Van Paassen for The Globe and Mail)

“One of the first things we did was that we went to Vancouver,” said Pan Am village and Canary District co-developer Jason Lester. “We did a field trip, where not only did we meet with the developer, but we also met with the general contractor. We also met with some of the consultants and had some discussions with people within the city and the financing community, as well as anyone we could think of that was peripherally involved with Vancouver.”

The takeaway, he felt, was that the Pan Am village and Canary District construction had to be more of a unified effort with the architects, builders and backers from conception. Mr. Lester’s firm Dream Unlimited Corp. (formerly Dundee Realty) is the co-developer alongside Kilmer Van Nostrand Co. Ltd., under the joint venture umbrella name Dundee Kilmer Development Ltd.

The overall plan for the West Donlands area had long been designed by Waterfront Toronto, the body that oversees the lakeshore revitalization. The walkways and local Corktown Commons park were also already designed, along with height and setback specifications for the residential buildings. The designers and developers had to come up with the actual building plans. 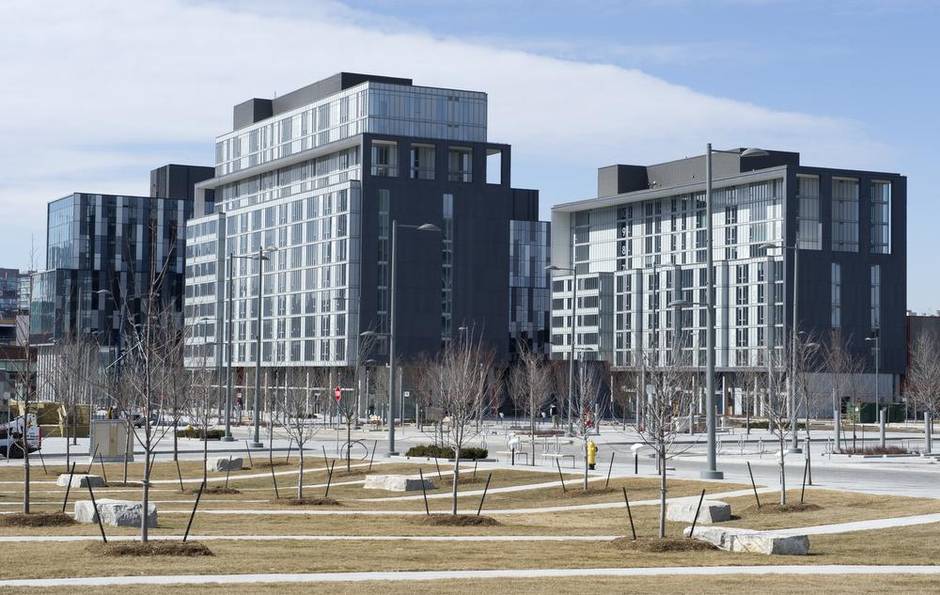 View from the southeast corner of the site on Bayview Avenue. The building to the left is affordable rental housing; the building beside it is the George Brown College student residence. (Kevin Van Paassen for The Globe and Mail)

After Infrastructure Ontario then issued its request for proposals for the athletes’ village, “we had to get a good idea of what the [construction] price was going to be, come up with a strategy and come up with all the financial partners in a period of about six months,” Mr. Lester said. “We had a few hundred people working on that bid. That’s when people were pulling all-nighters.”

Yet the aim wasn’t to maximize profit, he said. It was to win the bid and keep construction within budget, as well as add some breathing room to the new neighbourhood. For instance, Mr. Lester said the plan could have added “another 1,000 units or a few hundred thousand square feet on each one of these building blocks.”

He noted that “because we wanted to balance design and schedule risk, we actually built out less than what a typical developer would do. Developers always think, How can I maximize the density? Here was a very different, very constrained objective that was counterintuitive to most developers, and to architects for that matter.”

The waterfront area, from the Canary District to Queen’s Quay and blocks east to the mouth of the Don River, is being redeveloped, lot by lot, by various designers and developers. Mr. Lester noted that his firm is involved with the development of more than 1,000 apartment units in the Canary District and another 800 in the neighbouring Distillery District, as well as about 900 units on the other side of the Don River.

“Some are just at the planning and approval stages, and some of them are in the pre-construction, marketing stage,” Mr. Lester said, noting though that both sides of the Don River will have a density of units that is lower than much of the downtown. 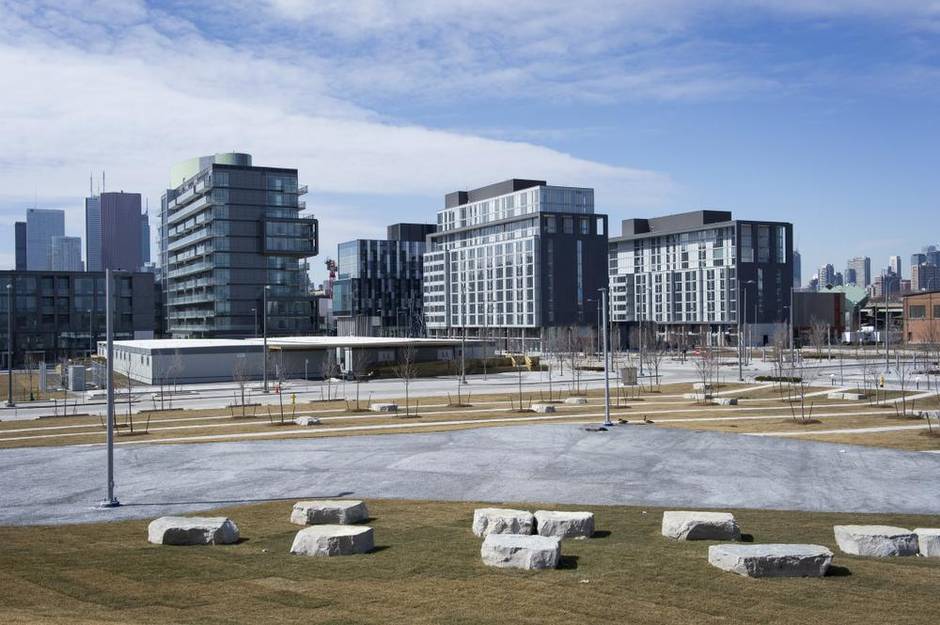 The low building in the foreground is the temporary Polyclinic in place for Games use. This photograph looks across block 13, a site for future development, but which will be parkland for the Games. (Kevin Van Paassen for The Globe and Mail)

The developers and overseers of the Pan Am Games athletes’ village wanted to keep the numbers in check and on budget. Still, the numbers show the large size of the village and what it entails.

6 – Number of new buildings to be used by athletes and team officials: five for housing – George Brown Residence building, Canary District Condos, Canary Park Condos and two rental buildings – plus the new Cooper Koo Family YMCA to serve as a treatment facility and other functions for athletes.

$514-million – What Infrastructure Ontario is paying for the build.

7,100 – Pan Am Games athletes and team officials will make themselves at home in the village.

3,200 – Parapan Am Games athletes and officials will also attend.

810 – Condos and townhouses are included in the development, 100 of which will be designated affordable housing.