The booming medical marijuana business is desperate to expand, so Canada’s cannabis growers are moving into spaces deserted by shrinking industries such as oil and gas and manufacturing.

In June of 2013, Mark Zekulin, president of Tweed Inc. (a subsidiary of publicly traded Canopy Growth Corp., Canada’s largest marijuana producer), walked into Dennis Staples’s office with a business proposition: to turn a 470,000-square-foot former chocolate factory into the future home for millions of dollars in marijuana plants.

It took just half an hour to convince Mr. Staples, then the mayor of Smiths Falls, Ont., to convert the town’s abandoned Hershey chocolate factory into a medical marijuana grow-op. 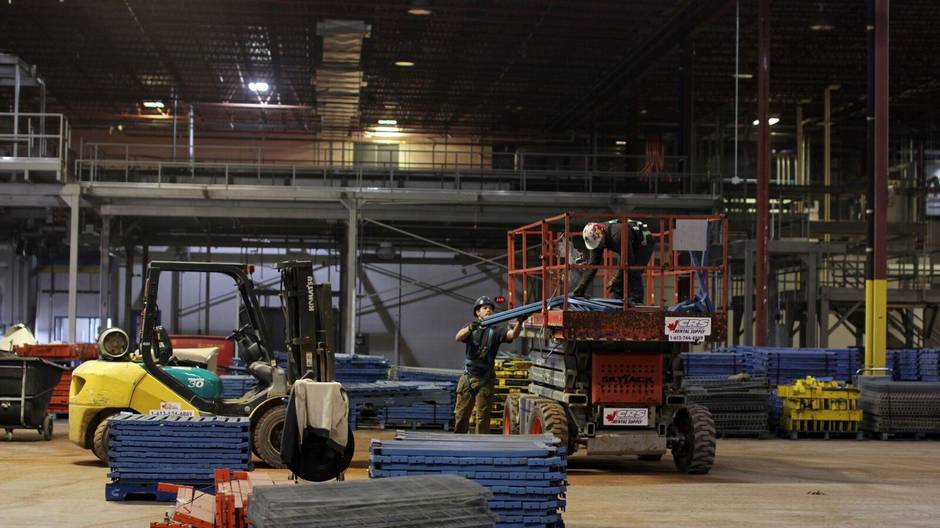 “I didn’t know what they wanted or who they were,” says Mr. Staples. “The discussion only took 30 minutes and I thought, this is going to happen somewhere in Canada, so why not Smiths Falls?”

He says he knew this was “a gift looking us straight in the eye” after several employers, including U.S.-based Hershey Co., moved out of the Eastern Ontario town of 9,000, taking 1,700 jobs with them.

“I didn’t want to be the mayor that said no to this opportunity after we’d said goodbye to all those jobs,” he adds. (The Tweed facility now employs about 205 full-timers and another 50 part-timers. Two-thirds of the work force are locals.) 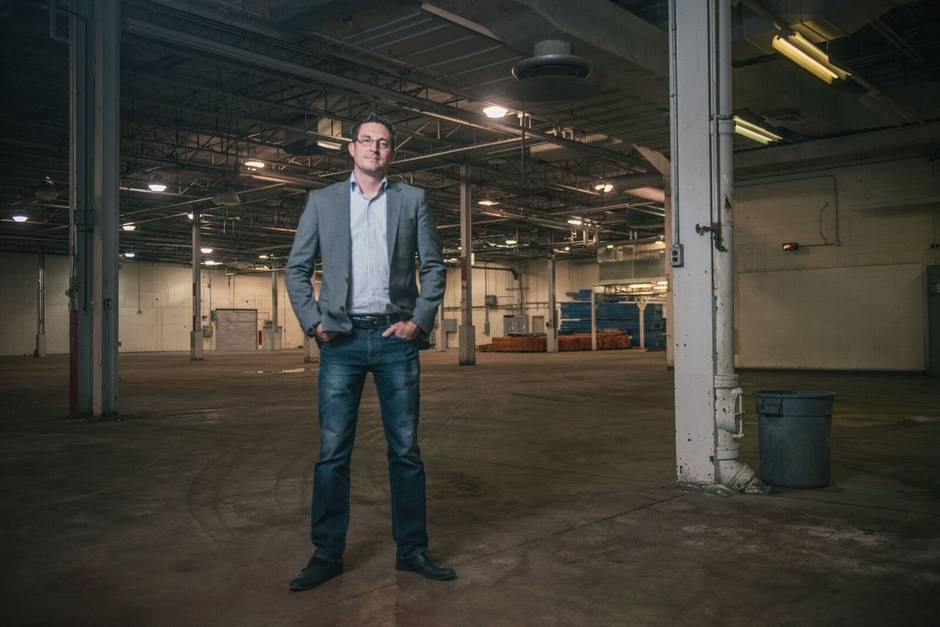 The Hershey building's past life as a factory meant it already had several required amenities in place, including correct industrial zoning. 'Plus, it was a large empty box, says Tweed president Mark Zekulin. (Jordan Sinclair/Tweed Inc.)

Mr. Staples is not alone in seeing the opportunity for employment and development by welcoming cannabis companies into the neighbourhood and reviving areas devastated by downturns.

The demand for medical-grade product is growing at an enormous rate. Health Canada says the country had 98,460 registered medical marijuana clients as of Sept. 30, 2016, up from 30,537 a year earlier. With this explosion comes a need to grow more weed.

But there are a lot of infrastructure requirements for a profitable marijuana producer, including access to uninterrupted high-wattage electricity, sophisticated security systems, a location close to (but not in the middle of) major distribution centres and, for big producers, square footage in the hundreds of thousands. 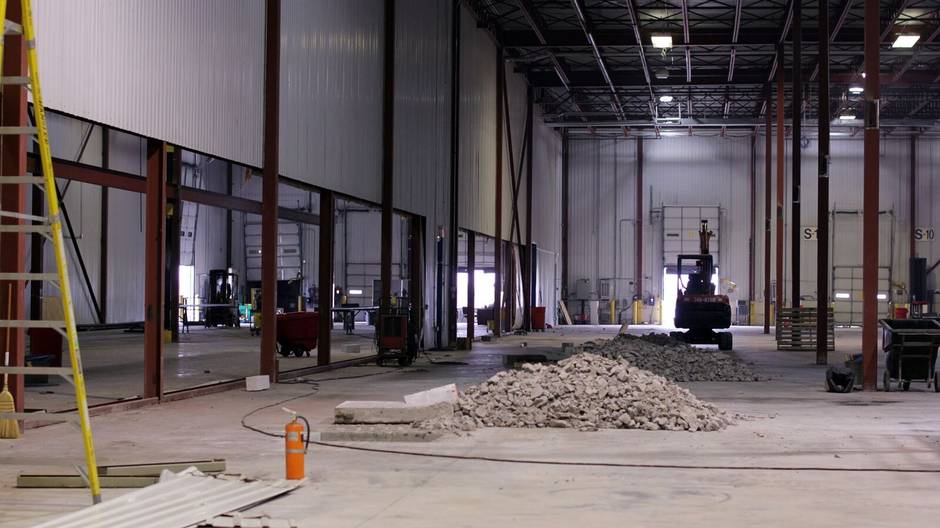 The Hershey factory had been abandoned for about five years before Tweed offered to move in. (Jordan Sinclair/Tweed Inc.)

With the pressure to expand weighing on Canada’s cannabis producers – there are 38 registered growers in the country, according to Health Canada – some are looking to build from scratch, while others have decided to convert existing structures into what they need. Both approaches have their pros and cons.

“Three and a half years ago we were looking for a home and this was the perfect home,” says Mr. Zekulin, about Tweed’s location at 1 Hershey Dr. “This was a business that had sat empty for five years – classic hollowing out of the manufacturing sector story. … It was hurting and [the town] had a mayor who saw the economic potential.”

Its past life as a factory meant the location already had several required amenities in place, including correct industrial zoning and the capacity for large electricity and water usage. “Plus, it was a large empty box,” explains Mr. Zekulin, which meant Tweed could use the existing footprint but install its required technology and security with relative ease. 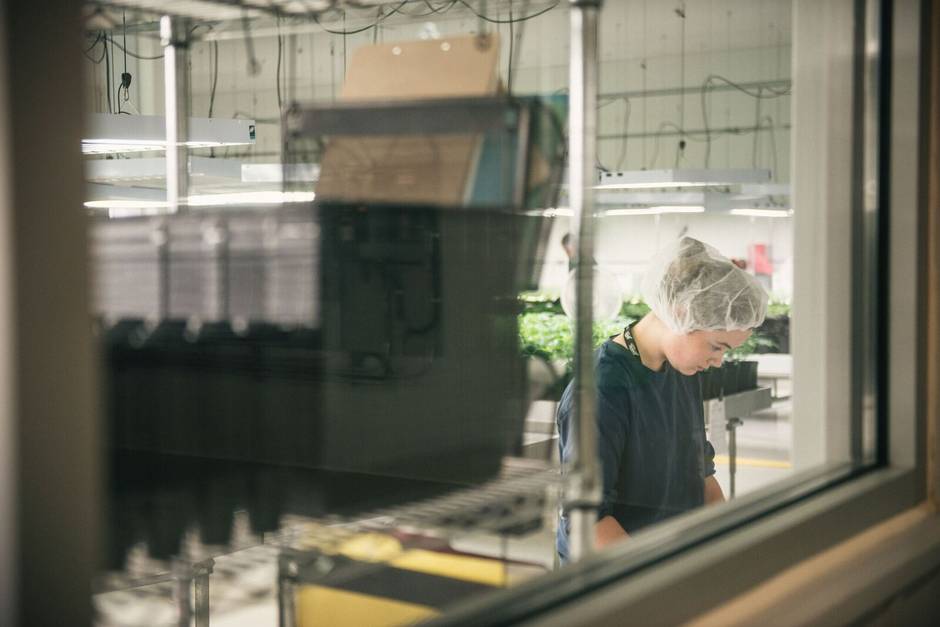 The Tweed cannabis plant in Smiths Falls, Ont., employs about 250 full- and part-timers, the majority of whom are locals. (Jordan Sinclair/Tweed Inc.)

The U.S. commercial real estate industry has already recognized the need for commercial space for cannabis producers, with agencies such as 420 Property Management and the AIR Commercial Real Estate Association offering prospective tenants (in states where marijuana is legalized) property options and access to agents specializing in correctly zoned, cannabis-friendly spaces.

“I’m not aware of any associations like this in Canada right now,” says Pierre Leduc, media relations officer for the Canadian Real Estate Association.

Smaller and medium-sized producers, including Tilray in Nanaimo, B.C., United Greeneries in Duncan, B.C., and AbCann Medicinals in Napanee, have found enough space in rural areas and smaller centres to set up shop. But larger operators say there is, and will continue to be, a pressing need for more large-scale commercial properties in Canada capable of housing millions of dollars’ worth of plants. 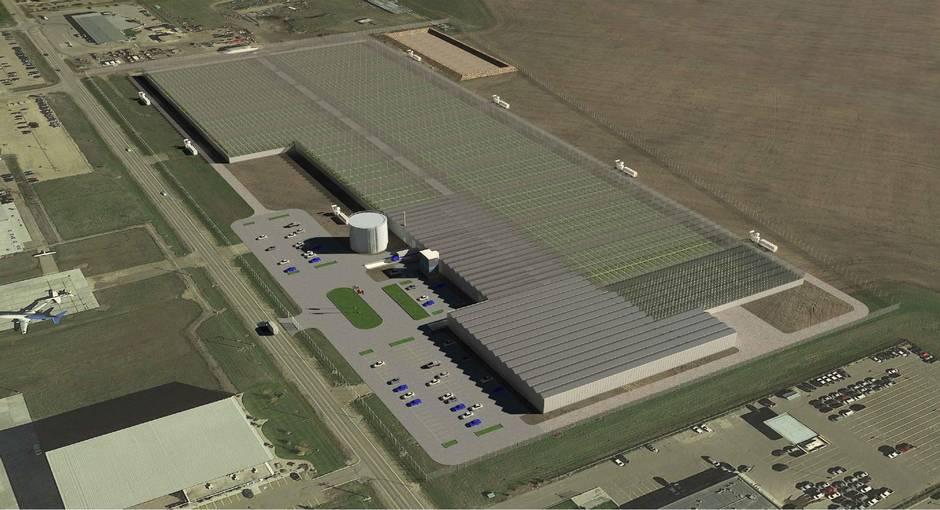 Aurora Cannabis is constructing an 800,000-square-foot production plant, as shown in this rendering, on federal acreage leased from the Edmonton International Airport in Leduc, Alta. (Aurora Cannabis)

B.C. grower Aurora Cannabis Inc. prefers the purpose-built, ground-up approach to this budding warehouse business. The Vancouver-based company is constructing an 800,000-square-foot production plant on federal acreage leased from the Edmonton International Airport in Leduc, Alta., a city that has suffered a drastic downturn in its industrial real estate since oil prices plummeted three years ago.

“It’s not like we were shopping around,” says Cam Battley, Aurora’s executive vice-president, “exactly the opposite in fact.”

Several jurisdictions in Alberta had contacted Aurora asking for the company to consider building its expansion site in their area.

The new plant, referred to as the Aurora Sky facility, will be the size of 16 football fields and capable of growing in excess of 100,000 kilograms of high-quality cannabis a year. 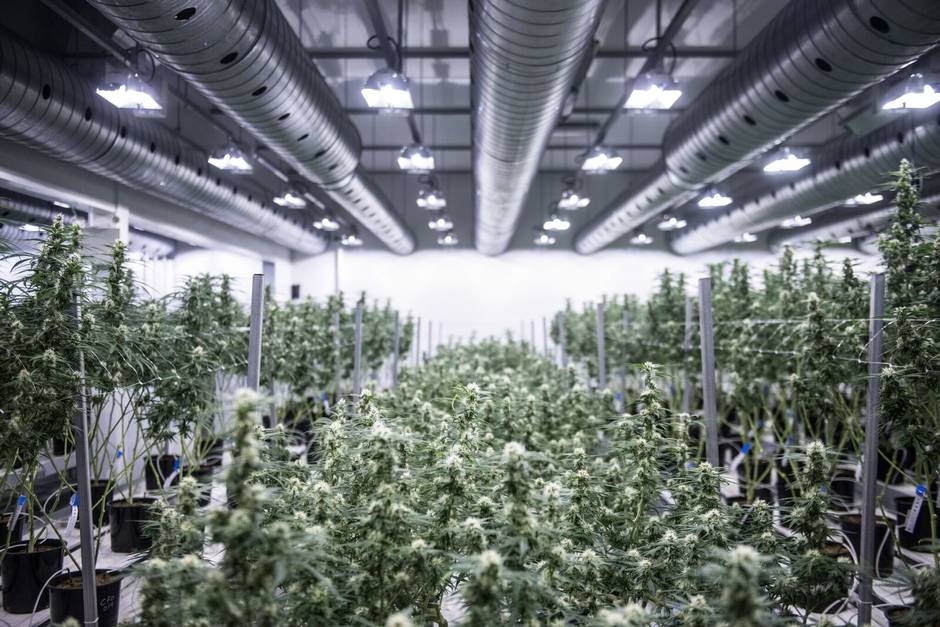 Health Canada says the country had 98,460 registered medical marijuana clients as of Sept. 30, 2016, up from 30,537 a year earlier. The potential legalization of pot for recreational use would most likely spur demand from producers further. (Jordan Sinclair/Tweed Inc.)

“There is a significant need for increased capacity in the sector,” says Mr. Battley, whose publicly traded company has raised about $130-million in capital in the past six months.

“The cannabis industry is growing way faster than anyone ever anticipated,” admits Mr. Battley, adding that the predicted legalization of marijuana for recreational use will prompt further growth in cannabis production. With industry analysts projecting a $10-billion-a-year industry for recreational pot alone, even more pressure would be put on the nation’s growers to keep up.

“We’re hearing consistent projections of around five million Canadians [using marijuana recreationally],” says Mr. Battley. “And one of the things I think the federal government is relying upon is that legal producers will be able to meet the demand for consumer legalization.”