Liberty Village, just west of Toronto’s core, is a beehive of construction, and the materials of choice are concrete and steel.

But the developer of a planned new office building at 80 Atlantic Ave. is taking a radical approach that once wasn’t radical at all. It will be the first mid-rise commercial building in Ontario to be built of wood in nearly a century.

The former industrial area south of King Street West has become extremely popular with small, creative companies that are attracted by a concentration of formerly industrial Victorian-era brick and beam buildings that have been converted to office use. 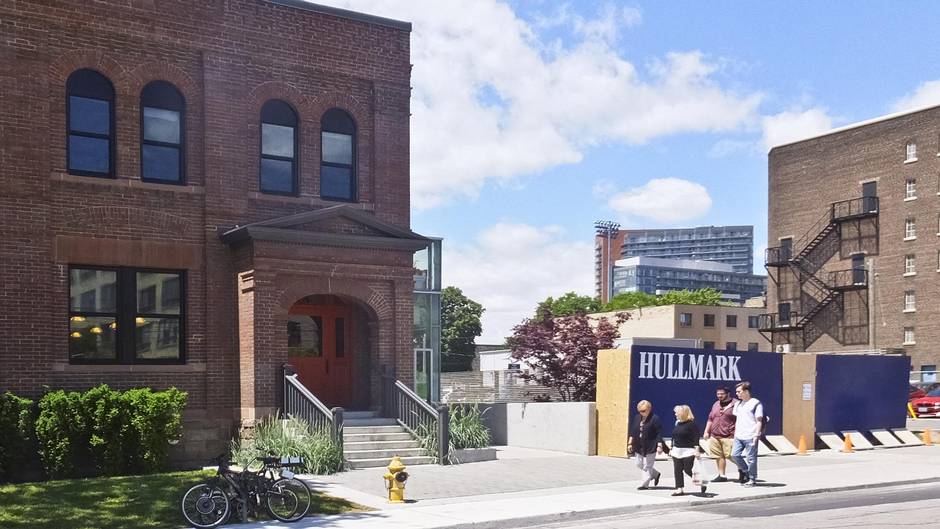 Hullmark Development is building a five-storey office mostly of wood in trendy Liberty Village. (Wallace Immen for The Globe and Mail)

Post and beam construction was common in Ontario until the 1920s, but the Ontario fire code banned the use of wood for structural components of commercial buildings that are more than four storeys tall. The reason: That’s as high as fire ladders could extend at the time.

In 2014, the province amended the Ontario Building Code to allow new wood frame buildings to reach up to six storeys – and Toronto-based Hullmark saw an opportunity.

Their material of choice for 80 Atlantic is cross-laminated wood: structural members made of layers of fir and spruce that are laid in different directions and pressure cured with environmentally safe adhesive. There will be a concrete foundation with two storeys of underground parking. The first floor will also be a concrete slab, but from there up, the structure will have wood posts, beams and floors. 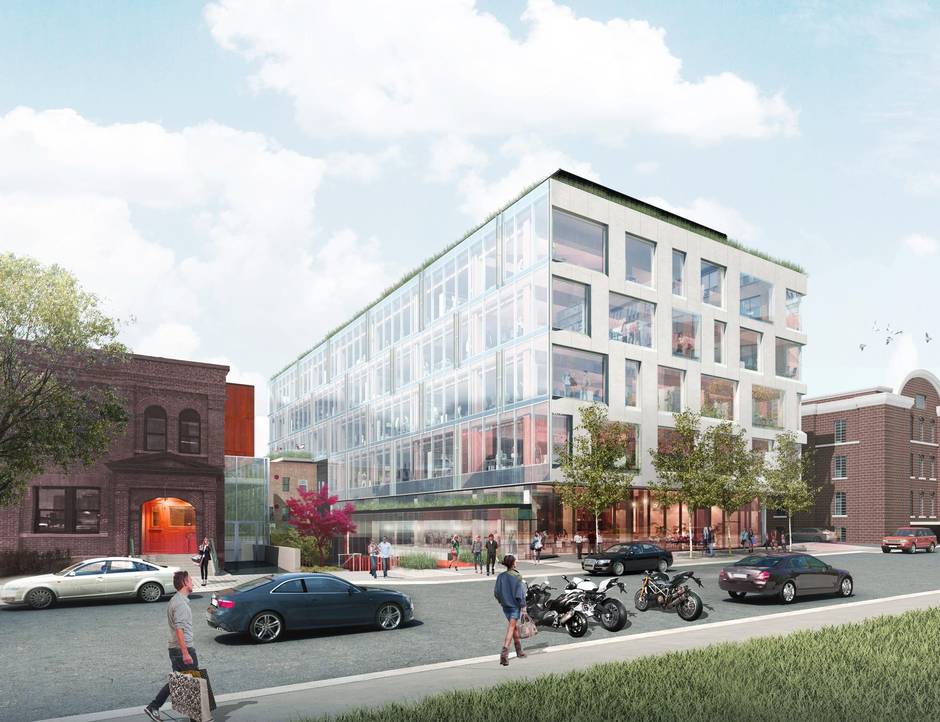 The developer of 80 Atlantic Ave., as shown in these artist sketches, kept the building to five storeys, reasoning it would be easier to prelease because the target tenants are mostly owner-operated small businesses. (Quadrangle Architects)

Even though the developer could have gone to 12 storeys in that neighbourhood with conventional concrete construction – as a project down the street from 80 Atlantic is doing – Hullmark has capped the project at five storeys.

There are compelling business reasons behind the decision to go with mid-rise wood construction, Mr. Hull says.

First are cost advantages. The assembly on site can be done with a small crew within weeks, because floors and beams can be assembled quickly. The components are prefabricated off-site in controlled conditions, so weather becomes a minor factor.

Another practical consideration was financing. “We decided a smaller building would give us the best shot at preleasing the space. If you have an eight or 12-storey office building, that’s a lot of tenants you have to find in Liberty Village, where the typical company is owner-operated and works year to year in terms of projecting office requirements,” Mr. Hull says. 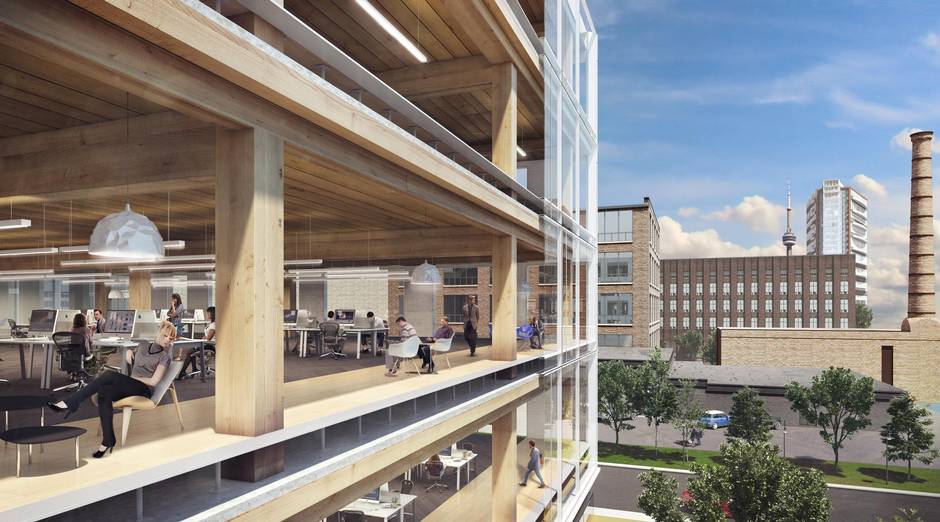 Banks typically require preleasing commitments for half the space before they approve construction financing. With a large project, that can mean a lead time of three to four years from the time a project starts.

Hullmark went to market in the fall of 2015 and secured bank financing backed by a creative firm’s commitment to one floor of space and some additional equity.

The project’s scope will provide added attraction for small tenants who want a unique office environment and high visibility, Mr. Hull believes. “If we build a concrete and steel office building, we’re competing against every other office building in downtown Toronto.”

Construction on what is currently a parking lot is scheduled to begin in the fall of 2016, as soon as zoning and site approvals are complete. Hullmark has chosen Eastern Construction Co. Ltd. as the general contractor.

The 80 Atlantic building will have a shared courtyard patio between it and a vintage brick and beam building at 60 Atlantic. Big Rock Brewery, which is setting up at 60 Atlantic and will share the patio with 80 Atlantic, is partnering with Oliver & Bonacini to make a two floor brewpub restaurant.

Quadrangle Architects Ltd. is doing the designs for both 80 Atlantic and a residential project Hullmark is building, along with condo developer Fieldgate Urban, that uses cross-laminated wood construction. Called Heartwood on the Beach, the six-storey, 37-residence building at Queen Street East and Woodbine Avenue was the first application under Ontario’s new wood building code.

There’s a growing interest in building with engineered wood not only in Canada but internationally, says Steven Street, technical manager of Ontario Wood Works, a program of the Canadian Wood Council.

The council has talked with developers who are contemplating 40 separate mid-rise wood projects in Ontario.

While there aren’t significant savings in material costs, there can be considerable savings in building time and carrying costs, which are a significant part of the equation for commercial buildings, the Wood Council has found.

“The biggest questions people ask are: Can you really go that high? And doesn’t wood burn?” Mr. Street says. “My answers are that there is no lessening of the code restrictions on occupant safety and no lessening of any safety objectives.

“We have lots of brick and beam buildings that are beyond six storeys and they have held up for 100 years and more. Buildings now all require sprinkler systems and the reality is that engineered timber chars rather than burns.”

But there are limits. Beyond six storeys, buildings become hybrids, using wood as well as steel and concrete, and there are several of these coming on line in Quebec and British Columbia, where fire codes allow taller wood construction.

At the University of British Columbia, a hybrid wood building is rising to 18 storeys. “Once the concrete slab work is done, the building can rise at a floor a week. That’s quite an incredible rate,” Mr. Street notes.

The new designs clad the exteriors with glass, which provide more natural light, among other advantages, he says.

There still need to be columns in the centre of floors in wood buildings to handle the load of floors above, but the beams can be much smaller because engineered wood is stronger than timber construction There is a learning curve, not just for tradespeople but also for architects and engineers going higher with wood construction, Mr. Street adds.

Among the engineering differences compared to concrete is that, initially, wood will shrink by a predictable and measurable amount as it ages, but that is built into the design. An advantage is that wood can also be acoustically superior to concrete.

Longevity should not be an issue, though. “We’ve got lots of wood beam buildings from the late 18th century that still look great and they’ve got a character that people appreciate,” Mr. Street says.

“From an office standpoint, the reality is there are a lot of people who prefer to work in older brick and beam buildings than in modern concrete buildings.”

The trend may be here to stay.

“We don’t want this to be the first and last. We’re hoping the success of this project will create a new typology that we can then use on other sites,” Mr. Hull says.