Five B.C. investors manipulated the share price of a company trading on the TSX Venture Exchange and left a group of victims – including many deeply indebted clients of an Ontario credit counselling agency – holding worthless shares, a British Columbia Securities Commission ruling has concluded.

The BCSC issued a decision Wednesday concluding that Thalbinder Poonian was the "mastermind" of a sophisticated scheme to manipulate the share price of OSE Corp., a small oil and gas exploration company, to reap millions in profits for himself, his family members and a group of friends.

Mr. Poonian, along with his wife Sharon Poonian and three other investors named in the case, earned over $7-million after buying a majority of OSE shares, engaging in various strategies to boost the trading price of the securities, and then selling them to unsuspecting buyers, the BCSC ruled.

Many of the buyers were clients of Phoenix Credit Risk Management Consulting Inc. in Richmond Hill, Ont., who were already facing "financial duress" before they bought OSE shares, the BSCS ruling said. Many were referred to Phoenix by collection agencies or creditors.

BCSC executive director Paul Bourque said the victimization of such financially vulnerable people was a sad element of the case.

"These people were unsophisticated, and were in financial distress to begin with, and now their retirement savings have been devastated as well," he said in an interview Wednesday.

Phoenix staff advised clients to unlock their locked-in RRSP accounts to invest in securities and generate much needed income, the BCSC said.

Mr. Bourque said the case demonstrates that investors should also be wary about investment schemes that require them to unlock pension or retirement savings to make speculative investments.

"That's always a red flag, and it's nearly always unadvisable," he said.

Phoenix clients bought over $8.3-million worth of OSE shares in 2008 and 2009, not knowing Phoenix and some of its officials were being paid large commissions by Mr. Poonian and others in his group to sell the shares – ranging from 10 per cent to 28 per cent of the money invested.

The BCSE decision said the Phoenix clients suffered over $7.1-million in book losses, not including their commission costs.

Phoenix and senior officials including Jawad Rathore and Vincenzo Petrozza separately reached a settlement with the Ontario Securities Commission in 2011, admitting they acted contrary to the public interest in conducting the share purchases by clients. The company and three officials agreed to pay penalties, costs and repayment of gains totalling over $3.3-million.

The BCSC ruling said Mr. Poonian was the "mastermind" of the trading scheme, directing the group's purchase of OSE shares and arranging the deal with Phoenix to sell shares to its clients.

The BCSC hearing panel said Mr. Poonian directed trading strategies commonly used to artificially inflate the price of OSE shares, including being both buyer and seller in "wash" trades, and engaging in "high closing" in which small numbers of shares are traded at an uptick in price just before the markets close to make it appear the stock climbed that day. Robert Leyk, Manjit Sihota and Perminder Sihota were also found to have participated in the improper trading.

"The conduct in this case, including market domination in OSE shares combined with use of nominee accounts, aggressive trading on both sides of trades, and uptick, high opening and high closing activity, clearly resulted in both artificial trading activity in, and artificial prices for, OSE shares," the ruling said.

Mr. Poonian denied the allegations during a hearing last year. He did not testify but submitted evidence arguing he did not direct the share trading by the other participants in the group, including family and friends.

The hearing panel said it did not find his submissions "persuasive" and said they were contradicted by evidence from some friends that they opened brokerage accounts at Mr. Poonian's request and allowed him to direct trading from the accounts. 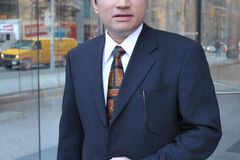