A high-profile U.S. law firm's decision to renounce its involvement in the sprawling multibillion-dollar battle against Chevron Corp. over oil pollution in the Amazon is "regrettable," says the Canadian lawyer spearheading the case in this country.

But Alan Lenczner, the prominent Toronto litigator retained by the group of Ecuadoreans at the centre of a 20-year battle against the U.S. oil giant, said he has no plans to back away from the controversial case: "I have been down there and I have seen the devastation."

His Ecuadorean clients have been pursuing Chevron since an Ecuadorean court found in 2011 that the company was responsible for cleanup costs after decades of drilling in Ecuador's Lago Agrio oil field. Chevron was handed a mammoth bill that an appeal court recently nearly chopped in half, to $9.5-billion (U.S.).

The Ecuadorean ruling has been denounced by the company, and recently by a U.S. judge, as corrupt. With California-based Chevron refusing to pay, Mr. Lenczner was retained two years ago to go after its Canadian assets, and similar actions were launched in Brazil and Argentina.

He will face off with lawyers for Chevron before the Supreme Court of Canada next fall. But the Ecuadoreans have suffered a series of blows in the United States in recent weeks, as no-holds-barred court battles there have resulted in key wins for Chevron.

Last week, prominent Washington, D.C.-based lobbying and law firm Patton Boggs LLP agreed to pay the U.S. oil giant $15-million and issue a "statement of regret" about its involvement in the case, which dates back to 2010. Patton Boggs also agreed to hand over to Chevron its promised 5-per-cent share of the Ecuadorean judgment's proceeds. In exchange, Chevron dropped claims it had made against the law firm.

The move by Patton Boggs comes after a scathing U.S. District Court ruling in March which said that the Ecuadorean judgment was obtained by "corrupt means." The District Court decision also found that a New York lawyer who spearheaded the case for the plaintiffs, Steven Donziger, and others had engaged in bribery, fraud and racketeering. But the ruling does not address the actual question of pollution in the Amazon.

"Based on the court's findings, Patton Boggs regrets its involvement in this matter," the firm's statement said.

In a statement last week, a Chevron spokesman welcomed the Patton Boggs move – and urged other involved in the case against them to follow suit.

"We are please that Patton Boggs is ending its association with the fraudulent and extortionate Ecuador litigation scheme," Chevron vice-president and general counsel Hewitt Pate said. "Chevron encourages others to disassociate themselves from this fraud."

The District Court ruling, which is under appeal, also blocks any attempt to collect on, or profit from, the Ecuadorean judgment in the United States.

Mr. Lenczner remains undaunted. He stressed that he has not been retained by Mr. Donziger and that his clients are the Ecuadoreans affected by the oil pollution.

In a statement, Mr. Donziger and the Ecuadoreans denounced the "betrayal" by Patton Boggs, called the law firm "the latest victim of Chevron's campaign of intimidation," and said they could seek to "nullify" the settlement. The plaintiffs said they still have a number of U.S. and international law firms and individual lawyers working on the case. Both sides have repeatedly accused each other of engaging in bribery and other dirty tricks.

In the Canadian battle, the two sides have a hearing tentatively scheduled for Nov. 7 before the Supreme Court. Chevron is challenging an Ontario Court of Appeal ruling last year that revived the Ecuadoreans' case. Chevron Corp. has argued that the Ecuadorean ruling has nothing to do with its Canadian subsidiaries.

Chevron also argues that Texaco, which it acquired in 2001, paid to do a cleanup in the early 1990s when it pulled out of Ecuador. Chevron maintains that any further costs were supposed to be covered by Texaco's former joint-venture partner, the country's state-owned oil company. 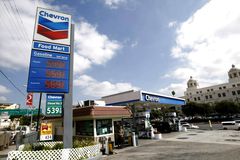