Paul Stern, the lawyer acting for the Law Society of Upper Canada's case against two of Conrad Black's former lawyers, railed on Monday about not receiving 168 boxes of documents from the lawyers' firm, Torys LLP, until just a week before the disciplinary hearing was supposed to start. (Ronald Foerster, a lawyer with Borden Ladner Gervais LPP but acting for Torys, said it was an inadvertent mistake on his part.)

While Mr. Stern repeatedly mentioned those 168 boxes of paper, he said the missing files also arrived in the form of a tidy little pile of 41 compact discs, toward which he gestured in the Osgoode Hall hearing room.

All of those boxes would have made a much more unwieldy prop. But given the slow pace of technological change in Canadian courtrooms, perhaps cramming them in for effect would have been more appropriate.

Earlier this month, a Whitby, Ontario, justice of the peace told criminal defence lawyer Sean Robichaud to put away his laptop, after the Crown objected to it as a potential recording device. He was forced to ask for an adjournment since his entire defence was stored on his hard drive.

Back at the law society, Mr. Stern repeatedly consulted a laptop during the proceedings. But a newspaper reporter was asked to put hers away, because it can interfere with the hearing room's recording equipment and computer system. (The court reporter said that it wasn't a problem that day. But rules are rules.) Don't even think of getting out your BlackBerry.

Veteran competition lawyer Paul Collins, the head of Stikeman Elliott LLP's competition and antitrust group, is joining the Competition Bureau in Ottawa as senior deputy commissioner of the mergers branch.

Mr. Collins, who has spent almost 18 years working on major corporate mergers for Stikeman Elliott's clients, will now supervise the merger review process in Ottawa and recommend to commissioner Melanie Aitken whether to hold up deals.

Last year, the once-troubled bureau was given more power to stop mergers it believed could harm competition. But the process has been streamlined to try to ensure it doesn't unnecessarily slow deals. The bureau has also just assumed new American-style powers to bust price-fixing conspiracies.

He said a tour of duty at the nation's regulator - common for competition lawyers in the U.S. and Europe but rarer here - will benefit both the bureau and his clients when he returns to private practice.

Ms. Aitken, he said, has worked hard to build bridges between the bureau and the competition bar, which had reached a low about six or seven years ago: "It had gotten, frankly, quite frosty."

She has been widely credited with turning around the competition watchdog, which had suffered from a series of missteps, including a drawn-out fight over Labatt Brewing Co. Ltd.'s merger with Lakeport Brewing Co. Ltd.

Mr. Collins is to return to Stikeman Elliott after a two-year term. The bureau says it has put "clear conflict of interest guidelines" in place for the duration of Mr. Collins's appointment. Mr. Collins said it will force him to steer clear of having any say in a file that involves his old firm.

Stikeman Elliott will fill his chair with Lawson Hunter, himself a former competition commissioner. The former BCE Inc. executive was also Mr. Collins's predecessor as head of Stikeman Elliott's competition/antitrust group from 1993 to 2003. 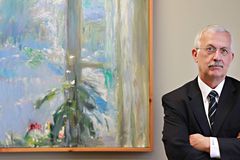