It looked like a good deal. Back in 1997, employees at what was then Riverside Forest Products Ltd., in Kelowna, B.C., were given a one-time offer: stay in their current pension plan, or switch to a new "defined-contribution" plan.

"Whether we're choosing a new coat or a new car, we make our decision based on our unique personal needs," a company bulletin told more than 200 employees. "When it comes to retirement planning, we all have different approaches to our retirement years. That's why choice plays a key role in planning for the future."

The company acknowledged that the new plan would no longer guarantee how much money employees would receive in their retirement. Each employee received a personalized package, complete with charts and graphs, that estimated how much they would receive under the new plan. Many agreed to switch.

In 2004, the company was taken over by Vernon, B.C.-based Tolko Industries Ltd. One employee who made the move to the new plan, worried about his future, decided to take another look at his pension with a financial adviser. The numbers, it is alleged in a lawsuit now before the Supreme Court of B.C., no longer appeared to add up.

According to the statement of claim filed on behalf of a group of employees who are seeking unspecified damages, Tolko is guilty of "negligent misrepresentation" for understating the worth of the old pension plan and overstating the benefits of the new one. The income projections were "way out of line with reality," lawyer Irwin Nathanson told the court, according to the text of his opening statement.

The B.C. company and its actuary, global firm Towers Perrin (since renamed Towers Watson), deny the allegations, which have not been proven in court.

Many Canadian companies in recent years have ditched expensive DB plans in favour of DC plans, which transfer the investment risk from the employer - who is no longer obligated to make up shortfalls in the fund - to the employee.

Some lawyers who specialize in pension cases expect similar fights to crop up, as employees who have switched to DC plans over the past two decades get closer to retirement and don't like what they see.

Observers say the B.C. case, now before a judge in Vancouver, could establish new ground rules for companies trying to sell their employees on a pension-plan switch.

Murray Gold, a partner with Koskie Minsky LLP who has represented labour unions, employees and retirees in pension cases, predicts that more lawsuits such as the one in B.C. are likely to emerge. The outcome of the case, in which he is not involved, could be "very influential," he said.

The key debate, he said, will be whether an employer in this situation is acting as the administrator of the pension plan, and so has a fiduciary duty to its employees to act in their interests.

"The first question is, when a company does this, are they an employer trying to get a good deal for themselves, or are they a pension-plan administrator with a duty to take case of the pension plan members?" Mr. Gold said.

The case also points to a larger problem, too, he said: The dramatic and unpredicted market crash of 2008 rendered obsolete almost all information packages about DC plans that were issued before the financial crisis. "So what do you do with that? Is it the case that you had to make plain to [employees]that although you're projecting 5-, 6-, and 7-per-cent returns, things can go dramatically worse than that? Or is that just bad luck for people?"

Last April, Mr. Justice Bruce Butler of the B.C. Supreme Court dismissed Tolko's attempt to have the suit thrown out, saying that the case was "novel and complex" and would have to address just what "standard of care" the company owed its staff: "The court has yet to adjudicate upon the scope of the duties owed by an employer and an actuary in the context of a pension plan conversion."

The employees - now whittled down more than 60 to a group of eight- argue that Tolko and its actuary incorrectly calculated how much money employees would be transferring from their old plan to the new one. They also accuse Tolko of making an "unreasonable" prediction of pension income from the new plan.

Tolko and its adviser deny the accusations and point out that the plan was approved by B.C.'s Superintendent of Pensions. In its statement of defence, the company said it told employees that the projections provided were not written in stone, and that they should seek independent financial advice. The company even pointed the finger back at employees, saying they failed to attend information meetings on the plan.

Toronto lawyer Kathryn Bush, a veteran of other high-profile pension battles who acts for employers, said she had no doubt that Canada's widespread conversion to DC plans would spark litigation.

The partner with Blake Cassels & Graydon LLP cautioned that she couldn't comment on the B.C. case in detail. But she said Tolko's pension fight is unusual, because such a high proportion - more than half - of eligible staff chose to switch to the new plan.

In the past few years, most companies that have offered a new DC pension plan to members of existing DB plans have seen smaller proportions sign up for the switch.

Fewer conversions means fewer disgruntled employees weighing lawsuits when their pension plans turn out to be less generous, she said. And the fact that many workers stick with their existing plans gives employers a handy argument to use in court if they are sued, because it suggests they did not oversell the new plan.

"It becomes much harder for the employees to argue 'We were all duped,'" Ms. Bush said.

Pension funds have been a perfect battle ground for lawyers: They are complex, with large amounts of money are at stake. Large law firms all have extensive pension practice groups. And with the country's patchwork of pension plans in perpetual crisis, there is no sign of slowdown.

In 1985, Conrad Black's Domgroup Ltd. withdrew millions of dollars from the Dominion Store employees' pension plan, which had a large surplus at the time. The move, although approved by the Ontario Pension Commission, sparked controversy because the company was closing stores and laying off workers. The unions fought a bitter and lengthy legal battle against the withdrawals, and a court-approved settlement eventually saw some of the money returned to the pensioners.

A often-cited 2006 Supreme Court of Canada decision said 146 Ontario workers who lost their jobs at Monsanto Canada Inc. were entitled to a portion of the surplus in their pension plan at that time. The decision was celebrated by organized labour as a victory in their fight to establish the right of workers to share in pension surpluses.

In what was hailed as a major victory for employers, the Supreme Court of Canada ruled in August, 2009, that a food company, Kerry Canada Inc., could move a surplus from its defined-benefit plan to a new defined-contribution plan. The court also said the firm could pay its pension fund's "reasonable" administration costs from pension money. 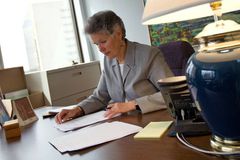