Nova Scotia's government is stepping in to try to put an end to an acrimonious 18-month labour dispute at Atlantic Canada's oldest and largest independently owned newspaper.

On Thursday, the province's Department of Labour and Advanced Education announced an unusual move, launching an "Industrial Inquiry Commission" that will impose mediation between the Halifax Chronicle Herald and its striking employees beginning on Aug. 4.

"It was time to take action," Derek Mombourquette, the acting minister of labour, said in an interview. "This process was not progressing. Both of these parties have tried all traditional bargaining methods and have failed. … This is something that we believed needed to happen to get both parties to a resolution. It's something we want both parties to embrace."

If mediation does not lead to a resolution, an appointed commissioner will launch an investigation into the causes of the strike and will provide recommendations to the minister on further steps. Lawyer and author William Kaplan, who last year mediated the labour dispute at Canada Post, will handle the mediation.

Under Nova Scotia's Trade Union Act, an Industrial Inquiry Commission has the same authority as the courts to order that documents be produced and to order witnesses to appear at a hearing. It is a rare move for the department, however: the last such commission was in 1993 and was not intended to resolve a labour dispute between two parties; rather, that inquiry looked into systemic labour relations issues in the province's construction industry.

The union representing the Chronicle Herald's 53 striking employees has asked the government to take this step repeatedly in recent months, most recently in June.

"It's long overdue," said Martin O'Hanlon, president of CWA Canada, the parent of the employees' local Halifax Typographical Union. "We understand the issues facing the news business in Canada. We're not naïve. … We've made so many concessions over the months, and it's time for the Herald to step up to the plate."

"We have offered Herald journalists the best newsroom salary and benefits in Atlantic Canada's newspaper industry, and our offer is still on the table today," Mr. Scott wrote. "We have also made it clear we are willing to resume talks at any time."

The strike began in on Jan. 23, 2016, after bargaining over the newspaper's union contract broke down. The union says the company has sought hundreds of changes to the contract, including eliminating seniority that would prevent layoffs of older employees, reductions in sick-leave pay and consolidating editing operations to a "hub" using non-union staff. While it will not accept such measures, the union says it offered a 5-per-cent pay cut for staff, longer working hours and an end to its defined-benefit pension plan.

"The proposed contract provides the groundwork for the newsroom of the future," Mark Lever, president and CEO of the Halifax Herald Ltd., wrote in his own paper in February of last year, adding that "the old way of operating a media business is quickly becoming a thing of the past."

Mr. Lever did not respond to a request for comment on Thursday.

The company – long owned by the Dennis family and now run by publisher and chairman Sarah Dennis and her husband, Mr. Lever – has been expanding its media holdings. In April, it announced it would buy all of Transcontinental Inc.'s newspapers in Atlantic Canada, creating the new private company SaltWire Network Inc. to oversee the media properties as well as the Herald and its other community newspapers. Terms of the deal, which included 28 local papers as well as the website NovaNewsNow.com, were not disclosed.

During the work stoppage, employees have been running their own news website, Local Xpress, in a revenue-sharing partnership with Ontario-based online publisher Village Media. Meanwhile, the Herald has relied on replacement workers and content from news wire services to continue publishing. Since the beginning of the strike, the Herald's weekday print readership in Halifax has dropped 15 per cent, while readership of Metro Halifax has risen 11 per cent during the same period, according to measurement firm Vividata.

The Herald's struggles come at a time of increasing tumult in the news industry. Changes in employment contracts – and occasional disputes with staff – have become a regular feature of the business landscape for media companies in recent years, as their revenue models have fundamentally changed. While newspapers have scrambled to offer up content on digital devices, the advertising and subscription revenues they are able to glean in that space have generally not come close to keeping up with the losses in lucrative print ads. Meanwhile, advertisers have been investing more in digital advertising, and the majority of that investment has flowed not to news publishers but to digital media giants, such as Google and Facebook.

Media outlets small and large have been experimenting with new ways to fund the journalism they do – including asking readers to pay for the kind of digital content they have become accustomed to receiving for free – and have attempted to cope with losses through widespread cost-cutting, including layoffs. According to the Canadian Media Guild, roughly 16,500 jobs in the media sector have disappeared since 2008; 47 per cent of those were in print media.

Federal Heritage Minister Mélanie Joly has been considering possible changes to her department's policies; and in June, the standing committee on Canadian heritage released a report with recommendations for funding journalism in Canada. In response, industry group News Media Canada proposed the creation of a journalism fund to finance 35 per cent of newsroom costs. 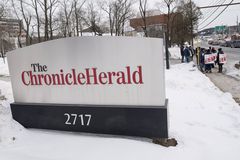 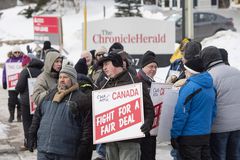 Transcontinental puts newspapers in Quebec and Ontario up for sale
April 18, 2017
Follow Susan Krashinsky Robertson on Twitter @susinsky
Report an error Editorial code of conduct
Due to technical reasons, we have temporarily removed commenting from our articles. We hope to have this fixed soon. Thank you for your patience. If you are looking to give feedback on our new site, please send it along to feedback@globeandmail.com. If you want to write a letter to the editor, please forward to letters@globeandmail.com.
Comments