Another day is drawing to a close, and Fadele Olatoundji still hasn't sold any car batteries today. He's been selling batteries for most of his life, and his father sold batteries before him, but he has never seen business so bad.

"There's no money to pay our rent," he says, sitting idly in his dingy street stall. Shelves of car batteries are propped in front of him, but the streets are empty of customers.

"We have to buy our food on credit now," he says. "You'll see the cassava flour seller coming here and asking for her money. The whole country is hungry."

The streets of Benin's biggest city, Cotonou, were once thriving with the bustling activity of the car industry. This West African country is the main port of entry for thousands of cars sold in neighbouring Nigeria. Yet today Benin's car sector has shuddered to a halt, the victim of Nigeria's deep economic slump.

Nigeria, the most populous African country, has plunged into its worst recession in decades. Its economy fell by 2.1 per cent in the second quarter of this year after a smaller decline in the first quarter. Sub-Saharan Africa, as a whole, is expected to grow by only 1.4 per cent this year, the slowest rate in more than 20 years, according to the International Monetary Fund.

Oil-dependent countries, such as Nigeria and Angola, are suffering badly this year, and their decline has dragged down the African economy. Africa's oil-exporting countries will see a 1.3-per-cent decline in their GDP this year, followed by a modest recovery to 0.9-per-cent growth next year, the IMF says.

But the region has become a two-track economy. While the resource-rich countries are slumping, the oil importers – especially those with diversified economies – are growing much faster. Ivory Coast is projected to grow by an impressive 8 per cent this year, while Kenya will grow by 6 per cent and Senegal will grow by 6.6 per cent.

South Africa is the big exception to this two-speed situation. While it is an oil importer with a diversified economy, its growth has been hampered by political feuding and poor governance, led by a corruption-plagued party with little idea of how to attract investment or create jobs. Its economy is forecast to grow by just 0.1 per cent this year.

Benin, a stable democracy, should be benefiting from its status as an oil-importing country. It was growing by 6.5 per cent annually as recently as 2014. But this year, weighed down by Nigeria's problems, it will grow by only 4.6 per cent.

"If we had any other job, we would leave," says Moise Hounga, who sells paint in Cotonou's car market. He says his income has fallen by 90 per cent in the past two years. "This is our only trade. We don't have anything else. We're really suffering."

Because of high import duties in Nigeria, most car dealers send their cars to Cotonou's port. The cars are then smuggled across the border to Nigeria and other nearby countries at a lower cost, in a widely tolerated trade. As many as 30,000 cars a month have passed through Cotonou this way, and most are sold to Nigeria.

But the stagnant Nigerian economy, combined with the shortage of hard currency as the Nigerian government tries to restrict imports and prop up its currency, has devastated the car business in Benin. Sales are down by an estimated 70 per cent this year.

"We are thinking of leaving the country," says Adeniyi, a 52-year-old car importer in Cotonou who would only be identified by his first name because of the unofficial nature of his business.

"All we want to do is sell our remaining cars and get out of the country," he says, glumly surveying the 50 unsold cars in his lot. "Many of us have already left. The banks are nipping at our heels."

Car dealers are not the only ones hit by Nigeria's recession. Many other traders, from frozen foods to appliances, have been badly affected. About 80 per cent of Benin's imports are "informally re-exported" to Nigeria, and this traditionally accounts for one-fifth of Benin's GDP, according to IMF estimates.

Earlier this year, an IMF report warned that Benin faced "headwinds" as a result of Nigeria's slowdown. It estimated that a decline of one percentage point in Nigeria's growth would be linked to a 0.3-percentage-point drop in Benin's growth.

"The Beninese economy is deeply interconnected with Nigeria," it said. "Close trade links to Nigeria expose Benin to risks from volatile commodity prices."

Adeniyi, sitting on a tall wooden platform to guard his unsold cars, can testify to the impact. He says he has sold only one car in the past three months, and he had to take a loss on the sale. "I sold it because I needed money," he says. "These days we're only trying to recover our costs." 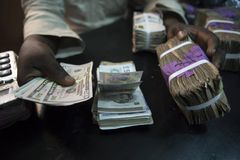 Saudi Arabia poised to sell record $17.5-billion in bonds
October 19, 2016
Follow Geoffrey York on Twitter @geoffreyyork
Report an error Editorial code of conduct
Due to technical reasons, we have temporarily removed commenting from our articles. We hope to have this fixed soon. Thank you for your patience. If you are looking to give feedback on our new site, please send it along to feedback@globeandmail.com. If you want to write a letter to the editor, please forward to letters@globeandmail.com.
Comments