Within hours of Lonmin agreeing to a pay increase of 11 to 22 per cent, workers at neighbouring mines were calling for similar hikes, suggesting more trouble in store after six weeks of industrial action that has claimed 45 lives and threatened Africa's biggest economy.

"We want management to meet us as well now," an organizer for the militant Association of Mineworkers and Construction Union (AMCU) at Impala Platinum, the number two producer, told Reuters.

Lonmin shares soared more than 9 per cent to levels not seen since police shot dead 34 miners on August 16 outside its Marikana mine, 100 km northwest of Johannesburg.

However, the deal could add 13 per cent to the company's recurrent costs, plus an additional $10-million for a one-off back-to-work bonus, Nomura said in a note. Lonmin is already battling with a shaky balance sheet and unprofitable shafts.

The settlement has also sown more strife in the area, with police clashing with an angry crowd in a township at a nearby Amplats mine outside the "platinum belt" city of Rustenburg.

Police spokesman Dennis Adriao said officers fired tear gas, stun grenades and rubber bullets to disperse an "illegal gathering". He had no information on any casualties.

A labour activist said workers who have stayed off the job at Amplats, which accounts for 40 per cent of global supplies of the metal used for catalytic converters in cars, were inspired by Lonmin and would press on with their demands.

"The mood here is upbeat, very celebratory," Mametlwe Sebei, a community representative near Rustenburg, told Reuters. "Victory is in sight. The workers are celebrating Lonmin as a victory."

Amplats had to suspend its Rustenburg operations last week because of the unrest. Those mines restarted on Tuesday but the company admitted many workers had stayed away.

Platinum prices rose a little on Wednesday after falling 2.6 per cent a day earlier on news of the Lonmin deal.

At Marikana, strikers celebrated their settlement as a triumph for AMCU, which exploded onto the South African labour scene in January when its turf war with the dominant National Union of Mineworkers (NUM) led to a six-week closing of the world's largest platinum mine, run by Implats.

Thousands of Lonmin workers and their families gathered at a football pitch near the mine to sing victory songs and denounce NUM, a key ally of the ruling African National Congress (ANC).

"AMCU is coming. We told them and they are coming," one of the chants ran. One man held up a banner reading: "Death Certificate; first name: NUM; cause of death: corruption".

The discontent rolling through the sector has found fertile ground in the shanty-towns that ring the mines.

"The ripple effects will continue to be felt. The outcome of the negotiation at Marikana will likely set a new benchmark for mining more generally and wage costs are set to rise substantially," JPMorgan said in a research note.

Wage hikes in the mining sector have been leap-frogging inflation for years, reducing margins in the industry as productivity has struggled to keep pace.

But the typical miner has several dependents to feed and so pay rises that outpace inflation may not go far as the gains evaporate at the kitchen table. Racing food inflation due to soaring global grain prices will only stoke workers' hunger.

The gold sector has also not been spared, with 15,000 miners at the KDC West operation of Gold Fields, the world's fourth largest bullion producer, on an illegal strike.

Gold Fields' chief executive officer Nick Holland told Reuters on Tuesday his company could "go on for quite some time" despite the KDC West disruption. 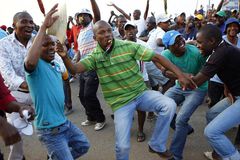 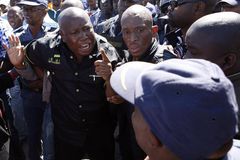 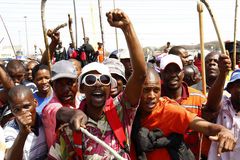 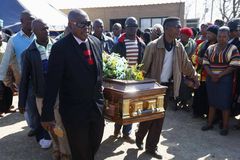