South African police barred firebrand Julius Malema from a rally of striking miners Monday, as President Jacob Zuma warned that the country could ill-afford a recession over mine stoppages.

Mr. Zuma told a conference of the country's powerful Cosatu labour group that 4.5 billion rand ($548-million U.S.) had been lost in gold and platinum production this year and a further 118 million rand lost in the coal sector.

"The impact goes beyond the mining sector," he cautioned, saying the manufacturing sector was showing strain.

"We cannot afford to go into a recession, and revert to the 2008 and 2009 period where the country lost close to a million jobs, which we are still battling to recover."

The warning came as British mining group Lonmin PLC cut its platinum sales forecasts over the continuing strike at its Marikana mine, which has been blighted by a violent strike that has crippled production for more than a month.

Lonmin became the epicentre of a wave of unrest to hit the vital mining sector in recent weeks, with tensions forcing several firms to suspend operations in the country's platinum belt of northwestern Rustenburg.

The striking miners at the Marikana mine meanwhile have accepted for the first time to lower their monthly salary demand of 12,500 rands, the mediator in the dispute said Monday.

Bishop Jo Seoka, president of the South African Council of Churches, told the SAPA news agency that he could not disclose the figure before they tabled it at negotiations with Lonmin set to resume Monday.

The miners were reportedly prepared to accept a monthly salary of 11,000 rands, according to news channel eNCA. The strikers claim they currently earn about 4,000 rand a month.

The government on Friday announced that it will no longer tolerate the unrest and ordered security forces to clamp down on illegal gatherings, weapons, threats and incitement which have characterised the spreading troubles.

Police at the weekend swooped on Marikana with the support of the army, seizing traditional weapons from workers and using rubber bullets and stun grenades to disperse workers gathering without police clearance.

Early on Monday, police arrested 42 people for embarking on an illegal strike at a shaft belonging to Royal Bafokeng Platinum.

Mr. Malema, former youth leader of the African National Congress, was also targeted by the crackdown after he was physically turned back by armed police, who gave him 10 minutes to leave, as he was about to enter a stadium where workers had gathered in Marikana.

Mr. Malema was axed from Mr. Zuma's ruling ANC party but has grabbed the spotlight of South Africa's mining unrest by using the events to fire up worker frustrations and lobby for wildcat stoppages.

The world's top producer, Anglo-American Platinum, which last week pulled down shutters on five mines in the platinum belt, said it will reopen on Tuesday.

Mr. Zuma urged striking mine workers and employers to find a solution to a spike in labour troubles that has flared into bloodshed and led to mine closings.

South Africa's Treasury had forecast an indirect loss of 3.1 billion rand from national revenue from strikes and stoppages on mines, said Mr. Zuma.

Meantime, the London-listed Lonmin, the world's third-largest platinum producer announced Monday it expected annual sales of between 685,000 and 700,000 ounces of platinum. That compared with its previous prediction of 750,000 ounces.

Acting chief executive officer Simon Scott warned that the strike could spark more job losses at the mine, as the firm cancelled its contract for 1,200 jobs. Lonmin had warned that a protracted strike threatened some 40,000 jobs in South Africa. 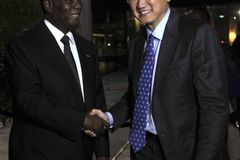 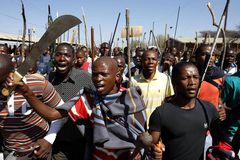 South African mine strikes spread
May 8, 2018 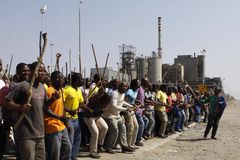 South Africa cracks down on ‘illegal gatherings’ in wake of mining crisis
May 8, 2018 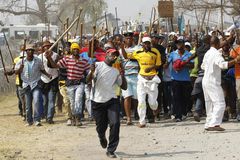