Amazon.com Inc.'s holiday quarter profit and sales missed estimates, taking the shine off of a year marked by record earnings and an expansion of the company's businesses. The online retailer's shares fell 15 per cent.

Fourth-quarter net income was $482-million (U.S.), or $1 a share, on revenue that rose 22 per cent to $35.7-billion in the fourth quarter, Amazon said in a statement Thursday. That fell short of analysts' average projection for profit of $742.9-million, or $1.55, on sales of $35.9-billion, according to data compiled by Bloomberg.

The stronger dollar weighed on revenue, shaving $1.2-billion from the quarter.

The result was a surprise for investors who have become accustomed to Amazon's ability to boost sales. by spending heavily on delivery infrastructure and new products. The key question is whether the Seattle-based company can readjust its investments in the face of weaker than anticipated sales. Still, Chief Executive Officer Jeff Bezos appears determined to show that Amazon can keep bringing in more profit and sales -- he pulled back on spending last year to deliver a surprise jump in earnings and will be showing Amazon's first Super Bowl commercial next week.

"When revenue goes up by more than $6 billion how are earnings only going up by 55 cents?" said Michael Pachter, an analyst at Wedbush Securities Inc. "That's what investors are wondering right now."

Amazon's shares, which more than doubled last year, fell as much as 15 percent in extended trading. The stock advanced 8.9 percent to $635.35 at the close in New York.

This was the first shopping season following Amazon's Prime Day promotion in July, an effort to boost the company's $99-a- year subscriptions that include delivery discounts and convert occasional shoppers into devotees. It was also the first season that Amazon offered same-day deliveries in most big cities around the country to cater to last-minute shoppers. E-commerce is on track to make up 9.8 percent of all U.S. retail sales in 2019, up from 7.1 percent in 2015, according to EMarketer.

At the end of 2015, there were more than 54 million Prime members, who get two-day deliveries and access to online movies and music, according to Consumer Intelligence Research Partners. That's an increase of 35 percent, the researcher said, adding that the average Prime shopper spends $1,100 annually with Amazon, compared with $600 for non-members.

On the spending side, operating expenses increased 21 percent to $34.6 billion, Amazon said. Bezos' biggest challenge is balancing Wall Street's thirst for profits against his own ambitions of using new technology -- such as unmanned drones and intelligent household gadgets. Bezos is also eager to replicate his U.S. success abroad, including challenging Flipkart Online Services Pvt. for India's fast-growing e-commerce industry.

One bright spot was Amazon Web Services, the company's cloud-computing division, which had fourth-quarter sales of $2.4 billion, up 69 percent from a year earlier. The unit, built on Amazon's expertise in running its Web store and handing massive amounts of data and analysis, represents a fast-growing and profitable part of Amazon's business, even though it makes up only about 7 percent of revenue, the company said.

"Amazon reached this new level of profitability in 2015 that we hadn't seen previously," said Kerry Rice, an analyst at Needham & Co. LLC. "If they don't keep that trend going in the right direction, the stock goes down." 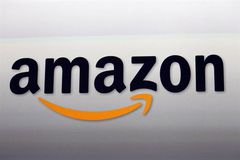