Global price disruptions will keep Indians, the world's biggest gold buyers, away from jewellery stores for at least the next few weeks until demand is likely to rise with the onset of the traditional festival and wedding seasons.

Zaveri Bazaar, India's biggest bullion market in the financial hub Mumbai, drew only a trickle of buyers on Monday as the country's benchmark gold futures hit a new peak of 25,180 rupees ($562.87 U.S.) per 10 grams. Gold prices in India have gained 21 per cent so far this year.

In the capital New Delhi, jewellery stores appeared deserted. Idle employees at one store watched TV news reports about bullion roaring to record highs after a downgrade of the U.S. credit rating.

"We had a few people inquire about today's price, but no one wants to buy now, because they are waiting for some clarity on whether prices will go down, in which case they would like to wait a bit," said Sunil Bagga, a manager at a New Delhi store.

"This air of uncertainty is not good. People want prices to stabilize, even if on the higher side. They want some clarity."

International spot gold was up 3.9 per cent from Friday at $1,716.20 an ounce on Monday afternoon. While global financial uncertainties weigh on Indian buyers' minds, persistent high inflation in Asia's third-largest economy has left little spare cash to buy gold. Small investors have also been reluctant to take cash out of Indian shares, which have over five straight sessions on fund selling.

Furthermore, India's gold market is almost entirely fed by imports and a drop in the rupee to its lowest in nearly six weeks has also weighed on gold demand. The rupee plays an important role in determining the landed cost of the yellow metal, which is quoted in dollars.

"There is buying intermittently, but day-to-day business is low ... The problem is liquidity, people don't have funds due to weak stock markets, and even inflation is eating into their disposable income," said F Choksey, proprietor of Franzi Rustamji Choksey Jewellers in Mumbai.

"Even sari shops are full of discounts in the next lane, but there are no buyers ... it has to do with the general environment of high inflation, interest rates," said Choksey, referring to the Indian central bank's 11 rate increases since March last year to keep prices down.

Traditionally in India, retail gold demand gains pace from the month of August when the festival and wedding seasons start, culminating with the Diwali festival of lights in October.

The jump in prices "has created panic in the market ... physical players are absent at the moment. I think buying will come in if prices stabilize for five to seven days," said Harshad Ajmera, proprietor of Kolkata-based JJ Gold House.

Gold jewellery is an essential part of the dowry basket that Indian parents give their daughters at weddings.

"I'll wait for a few days," said homemaker L. Ellaboudi, one of a few customers at a jewellery shop in Mumbai's Zaveri Bazaar, scanning through glittering necklaces and diamond rings.

Many Indian buyers see the latest spike in gold rates as price bubble. Some have taken lessons from retail investors who bought silver bars and coins during the metal's meteoric rise early this year, only to rue their luck when a rout in May shaved a third off the metal's value.

"Some sense will prevail in the physical market ... buyers will react only if there is a $100 (an ounce) fall from here," said Gnanasekar Thiagarajan, director with Commtrendz Research in Mumbai. 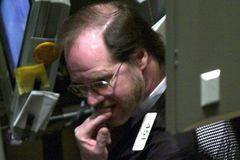 North American markets plunge
May 3, 2018
Follow us on Twitter @globebusiness Opens in a new window
Report an error