A Canadian offshore settlement centre for the Chinese yuan would boost trade between the two countries, Chinese bank and diplomatic officials say, and it doesn't really matter whether it is located in Toronto or Vancouver.

William Zhu, Canada chief executive officer for the Industrial and Commercial Bank of China (ICBC) – the largest private bank in China and one of the biggest banks in the world – said he has told officials in British Columbia that it makes sense for Ontario and B.C. to collaborate, rather than debate where the settlement centre should be based.

Mr. Zhu, who is part of a working group of Canadian and Chinese financial institutionsworking on the issue, said it was positive to see B.C. Finance Minister Michael de Jong say recently that he was pitching the federal Finance Minister on a "pan-Canadian approach" to landing a settlement centre for the Chinese yuan, or renminbi (RMB), in Canada. Previously, groups from both Vancouver and Toronto were arguing forcefully for their own cities – though some division still exists.

"I'm happy to know B.C. and Ontario can work together," Mr. Zhu said in an interview. "The companies doing business with China will benefit. It will pull Canada and China closer."

The growth in offshore RMB trading hubs, which already exist in Taipei and London, has dovetailed with the yuan's rise in importance and is tied to China's rapid economic growth, as well as the country's attempts to internationalize its currency. Between 2010 and 2013, the value of China's total trade that was settled in renminbi jumped from just 3 per cent to 18 per cent, according to HSBC.

Offshore currency trading centres boost trade by reducing currency-exchange costs for companies doing business in China by allowing direct conversions from Chinese yuan into local currency, without first having to convert the funds into U.S. dollars. On Wednesday, Chinese Premier Li Keqiang announced on a visit to Britain that the China Construction Bank would be the country's first clearing bank for the renminbi, a move that would further reinforce London's leading position as a RMB trading hub. "Put simply, the renminbi is already a major global currency," said HSBC Group chairman Douglas Flint at a meeting between U.K. and Chinese business people last week.

Mr. Zhu stressed that the whole country would benefit regardless of whether the trading centre was located in Toronto or Vancouver, particularly since there are few direct jobs tied to the settlement centre. "The offshore centre doesn't mean much for job opportunities," he added. "It's mostly computers."

Mr. Zhu's comments were echoed by Canadian representatives of the Bank of China, one of China's large state-owned banks, as well as China's consul general in Vancouver.

Wang Heng, an executive vice-president with the Bank of China who is in charge of its operations in Vancouver, said the move would make it much easier for Canadian companies to do business in China, and for Chinese companies to expand in Canada, and would help create more jobs.

"It will be an advantage for trade," Mr. Wang said.

"Both Vancouver and Toronto have distinct advantages," added Michael Wu, who works in the Bank of China's Vancouver trade finance department. "No matter where the centre is, it will help Canada and we will support Canada to get the offshore renminbi center."

China's consul general in Vancouver, Liu Fei, stressed that an RMB trading hub would help boost Canada-China trade, and awareness of China's role in the Canadian economy, at a time when many Canadians seem singularly focused on trading with the U.S. and other western countries – attitudes that were reinforced by a recent Asia Pacific Foundation of Canada poll, which found Canadians souring on trade with China.

"All the ports are booming because of trade with China," Ms. Liu said in a large sitting room at China's Vancouver consulate. "If a company does millions in business, the exchange costs will be huge."

But she also said the move would be good for ordinary tourists, and would help boost Chinese tourism to Canada – particularly B.C. – by making it cheaper for tourists to convert money. Ms. Liu joked that her preference would be for the trading hub to be based in Vancouver, and that she differs with China's Toronto-based diplomats on the issue. 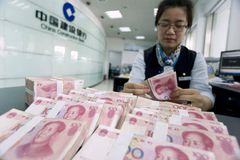