Chinese data dealt policy makers fresh blows on Friday as trade and new bank lending suggested pro-growth policies have been slow to gain traction and more urgent action may be needed to stabilise the economy.

Figures on Friday showing July exports rose just 1 per cent from a year ago and that new loans were at a 10-month low added to data on Thursday showing factory output rising at its lowest pace in three years and pricing power fading.

The first hard data of the third quarter has led some analysts to question the strength of what was expected to be the start of a shallow rebound in the economy after growth had slipped for six successive quarters.

"We think the central bank should move as quickly as possible to stabilize the economy. I expect there will be at least one more RRR cut and interest rate cut this quarter," Xiao Bo, economist at Huarong Securities in Beijing, told Reuters.

Some economists say the central bank could move as early as this weekend to ease policy. It has reduced banks' required reserve ratio (RRR) in three steps since November to free up an estimated 1.2 trillion yuan ($190-billion U.S.) for new lending and cut interest rates in June and July.

Net new bank lending in July of just 540 billion yuan versus expectations of 690 billion yuan is a big potential cause of concern. Bank loans are the main credit creation mechanism in the economy, which is only in the early stages of reforming capital markets to boost available sources of corporate finance.

The low figure adds to fear of faltering demand from China's two biggest foreign customers – the European Union and United States – which had already seen economists peg back their consensus call for annual export growth to 8.6 per cent in a Reuters poll last week.

Excluding a fall in exports in January, the 1-per-cent rise in July is the weakest since November 2009 and marked a big pullback from annual growth in June of more than 11 per cent, Reuters data shows. Shipments to the European Union dropped more than 16 per cent.

July imports rose 4.7 per cent from a year earlier, the weakest pace since April and also well short of expectations for an increase of 7.2 per cent.

Ahead of the data, China Vice Commerce Minister Gao Hucheng had told reporters it would be a challenge for China to meet its 10 per cent trade growth target in the second half of the year. The minister, Chen Deming, had said in June that China would be "lucky" to achieve the target.

China is not alone in feeling the pressure. Taiwan on Monday posted a fifth straight month of decline in exports in July, dragged down by double-digit drops in shipments to China, Europe and the United States, while South Korea's July exports were the worst in nearly three years.

"Those looking for signs of resilience in China's economic data were merely disappointed yesterday, but they are going to be distraught today," Alistair Thornton and Xianfang Ren, economists at IHS Global Insight in Beijing, wrote in a client note.

Beijing has refused to describe its pro-growth policy tweaks since the autumn of last year as stimulus, calling it a process of "fine-tuning" – albeit one that has fast-tracked state-funded infrastructure projects.

Fine-tuning has so far failed to convincingly arrest the slide in expansion that is likely this year to see China chalk up its slowest full-year of growth since 1999, at 8 per cent according to the latest Reuters poll.

China's top leaders pledged last week to take steps to diversify export markets in the second half of the year to support an economy that saw its slowest pace of growth in more than three years in the second quarter.

Analysts said a fall in consumer inflation in July to a 30-month low of 1.8 per cent should reassure policymakers they have some room to relax policy.

The government though is conscious of the risk of loading the economy up with too much cheap credit, as it did during 2008-09 when it unveiled a 4 trillion yuan stimulus programme and let local governments go on a borrowing binge that saw them rack up some 10.7 trillion yuan in debt by the end of 2010.

Analysts think as much as 2-3 trillion yuan of those loans may have turned sour and might never be repaid. Beijing does not want a repeat performance and it could be one reason for July's relatively muted new loan data.

"The loan number is quite small, it's quite a surprise. I think it reflects that the PBOC and banking regulator are concerned about credit risks on bank balance sheets," Yao Wei, China economist at Societe Generale in Hong Kong, said.

Corporate news has added to the gloom over China's economy.

Big manufacturers have joined consumer companies in warning of flagging sales, disappointing those hoping for signs of a turning point.

Global supply chain manager Li & Fung Ltd. reported on Thursday that first-half core operating profit fell 22 per cent from a year ago. Shares in the firm that counts major U.S. retailers Wal-Mart Store Inc and Target Corp among its clients, fell by a fifth on Friday.

China's exports gloom may not be over yet since government purchasing managers' figures last week showed new export orders fell in July at their fastest rate in eight months. That's something saleswoman Nancy You knows all about.

"We have definitely felt the impact of (the global slowdown). The situation in the second half is worse than in the first half. I don't know why. We export to both the United States and Europe – Europe is our main market," said the saleswoman for Rayson Electrical Manufacturing Co in Guangdong, which produces office supplies such as binding machines and paper shredders.

For Chen Lifeng, vice general manager of Ningbo Tengsheng Garments in the eastern coastal province of Zhejiang, business is steady, but the outlook uncertain.

"Orders are OK right now – this is usually the busy season for us. But we are still not operating on full capacity," Chen said.

The slowdown implied by Thursday's data was enough to prompt Barclays Capital to cut its full-year China growth forecast to 7.9 per cent from 8.1 per cent.

The bank's economists still expect the second half of 2012 to deliver stronger growth than the 7.6 per cent in the first half, which was mainly fuelled by domestic consumption and capital spending. 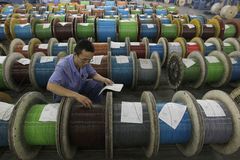 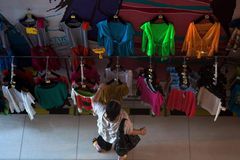 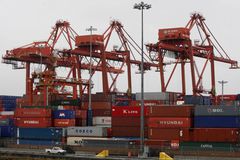