A group of Chinese companies, including Industrial and Commercial Bank of China (ICBC), is in talks to buy American International Group Inc.'s aircraft leasing unit for about $5.5-billion (U.S.), two sources familiar with the matter said on Friday.

One of the sources, speaking on condition of anonymity, said the deal is expected to be announced as soon as early next week.

AIG, which has been selling assets to pay back a $182-billion U.S. government bailout from 2008, had long been hoping to float its ILFC unit through an initial public offering, but poor market conditions forced it to delay those plans.

An IPO was expected to value the company at $6-billion to $8-billion, according to previous reports on the plans.

AIG Chief Executive Robert Benmosche said last month that he was waiting for markets to improve to take ILFC public.

But a Chinese consortium has stepped in to buy the leasing company, said the sources, both in Asia, who were not authorized to speak publicly about the matter.

"The talks are reasonably far along," the second source said, adding that the purchase price has not been fully determined and depended on various factors.

AIG will retain a small minority interest in ILFC as part of the deal, the first source said.

According to AIG's third-quarter earnings report, ILFC's net book value as of Sept. 30 was $7.9-billion. In the past, Mr. Benmosche had been adamant about not selling ILFC for less than book value, although the fact that the IPO process has languished for 15 months may have changed his thinking.

The report said ILFC had total assets of $39.6-billion and reported $39-million in operating income in the third quarter, compared to an operating loss of $1.3-billion a year earlier, when it took $1.5-billion of impairment charges and fair value adjustments.

Founded by leasing legend Steven Udvar-Hazy, who sold the company to AIG and eventually formed his own group, ILFC is one of the world's largest leasing companies and among the world's biggest owners of passenger jets. Its main rival is GECAS, the aviation leasing arm of General Electric Co.

ILFC's customers include most of the world's major airlines.

Since it was founded almost 40 years ago, ILFC has bought a combined total of more than 1,500 passenger jets from Boeing Co and Airbus, according to manufacturer figures.

ILFC has a current portfolio of more than 1,000 owned or managed aircraft. It has on order 239 new fuel-efficient planes, including Boeing 787s and Airbus A320neos, and has the rights to purchase an additional 50 such aircraft.

The leasing company has been looking for areas of growth and beefed up its presence in the Asia Pacific region by opening offices in Singapore and Beijing this year.

China has shown interest in buying aircraft leasing businesses before.

China Development Bank, the country's policy lender, was among the short-listed bidders for Royal Bank of Scotland Group PLC's aviation business earlier this year, according to a previous Reuters report.

That business was bought by a consortium led by Japan's Sumitomo Mitsui Financial Group.

As a result, the manufacturers may not need to compete as heavily for orders as in the rest of the world, so China is paying a premium for aircraft, industry experts say. The order books of ILFC could mean cheaper planes for China.

Chinese companies have launched about $51.3-billion worth of overseas acquisitions this year, making the country Asia's second-biggest spender on outbound transactions, according to Thomson Reuters data, behind Japan.

Spokesmen for AIG and ICBC declined to comment. Reuters was unable to reach New China Trust and China Aviation. 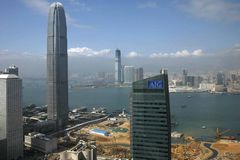