The beef was several months past its due date but it would be mixed with fresher cuts and shipped out anyway.

On the factory floor, meat dropped on the ground, recycled beef patties and defective chicken nuggets were all tossed back into the production chain.

The revelations last weekend from an undercover report by Shanghai-based Dragon TV were astonishing – and yet familiar.

But never before has such a scandal spread to ensnare a range of foreign companies.

In this footage from the Dragon TV exposé, alleged Shanghai Husi Food Co. employees are seen picking meat up off the floor and throwing it back into a collection bin. Source: CCTV News.

The firm at the centre of the allegations, Shanghai Husi Food Co., is owned by Illinois-based OSI Group. And it supplied local franchises of international companies such as McDonald's, Starbucks, KFC and Pizza Hut. On Tuesday, the rotten meat scare spread overseas as McDonald's Japan confirmed in a statement that some of its chicken nuggets came from Shanghai Husi.

OSI said in a statement on the website of its Chinese subsidiary that "company management was appalled by the report and is dealing with the issue directly and quickly."

Past scandals have damaged the image of domestic Chinese food suppliers, but the Shanghai Husi case shows foreign companies operating in China are not immune.

Last December, for example, Wal-Mart had to recall a donkey-meat snack sold at its Chinese stores after DNA tests showed it contained other animals, including fox. 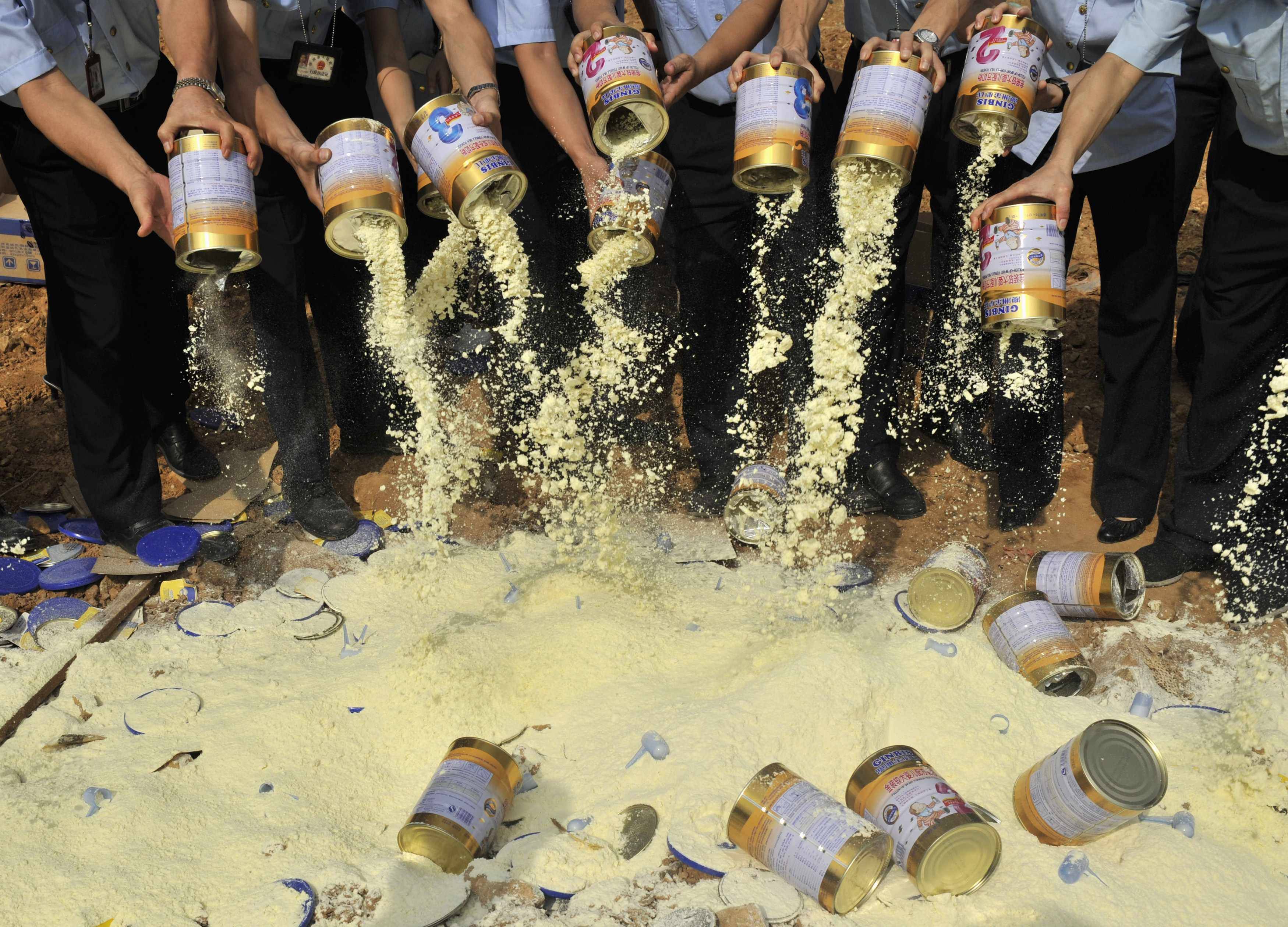 2. It’s the biggest since the great infant formula scandal of 2008

At least six babies died and hundreds of thousands of infants were sickened with kidney stones after drinking infant formula made by the Chinese dairy company Sanlu Group. Melamine had been added to watered-down milk because its high nitrogen content masked the lack of protein.

Two men were executed and others were sentenced to prison, amid allegations that the government withheld news of the contamination until after the Beijing Olympics were held.

Chinese consumers looking for infant milk powder outside of China created shortages elsewhere. With mainland China emptying its shelves of milk powder, Hong Kong last spring barred travellers from taking more than 1.8 kilos of baby formula out of its territory and arrested dozens for formula smuggling. 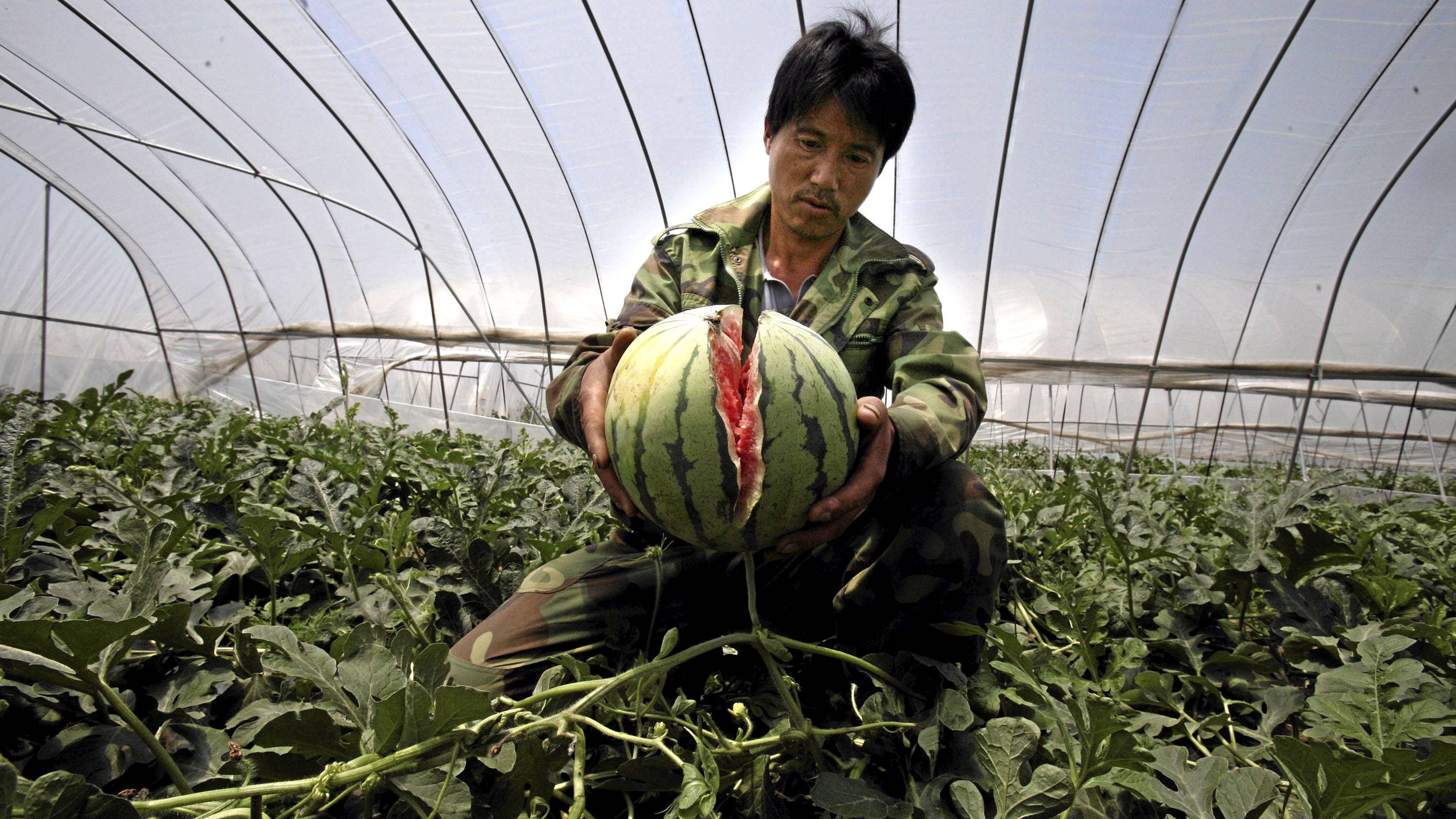 A Chinese farmer holds a watermelon that has burst from overuse of growth chemicals. AP/AP

All the food scares have turned China into a place where watermelons explode and Olympic athletes have to shun their own country's meat product for fear of failing doping tests.

In 2011, farmers in Jiangsu province had a problem with exploding watermelons, which were blamed on the overuse of forchlorfenuron, a chemical that stimulated faster growth.

The meat industry meanwhile was plagued by pork producers using "lean meat powder" – clenbuterol, a performance-enhancing steroid also favoured by professional cyclists. Hundreds of consumers had to be hospitalized after eating clenbuterol-tainted food while some Chinese athletes training for the London Olympics in 2012 were placed on a meat-free diet to avoid doping control problems.

The ingenuity of Chinese food scammers seemed limitless. Local media have reported on food workshops in Hunan province creating artificial green peas by bleaching cheaper dried snow peans and soybeans. Other scams involved treating duck meat with mutton grease or lamb urine to pass it off as more expensive lamb. Another stomach-churning phenomena has been"gutter oil," where used cooking oil is skimmed out of drains and gutters and recycled. 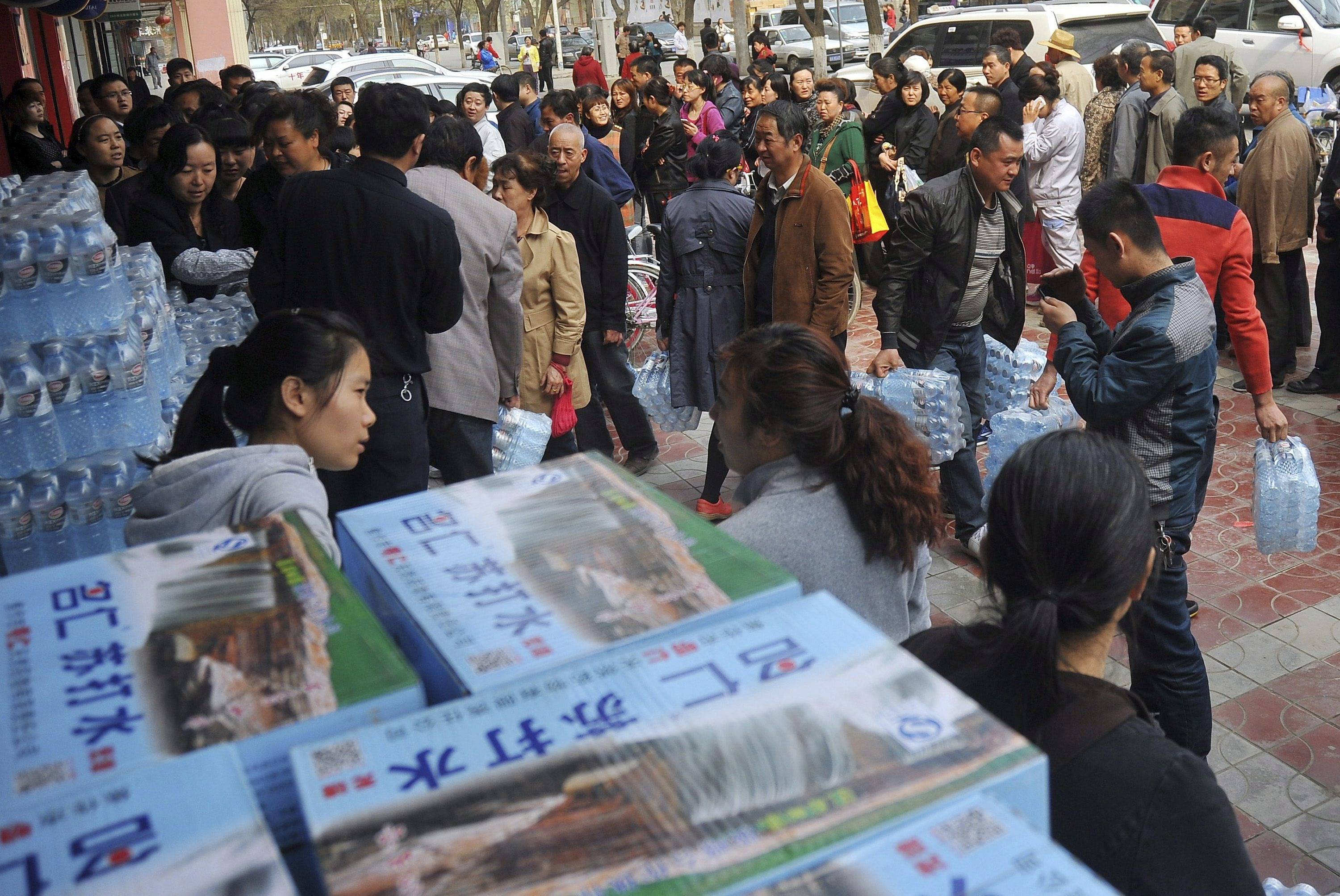 People line up to buy bottled water in the city of Lanzhou, China in April, after a benzene leak contaminated their tap water supply. AP/AP

4. Looking out for the next danger

China's growth is outpacing its fresh water sources, with 70 per cent of the country's rivers and lakes being contaminated. There are fears that the next scandal will involve their water supply.

Last April, tap water tainted with benzene triggered a frenzy by residents in Lanzhou, an industrial centre of more than two million, as people rushed to buy bottled water.

Demand for bottled water is soaring. However, with groundwater that's already contaminated, a chaotic regulatory system and poor quality control, there are reports of bottled water being tainted with chemicals or bacteria thousands of times over the permissible safety levels.

"Absent stricter regulatory oversight, the safety of bottled water cannot be assured, and counterfeit bottling and renegade bottling practices will only prove a more potent threat to the safety of China’s bottled water," warns an academic paper in last May's Vermont Law Review.