After emerging as the leading smartphone maker, Samsung Electronics Co. is now being hit hard by fast-moving changes in the global cellphone market.

But newer competitors in China, such as Xiaomi Inc. and Lenovo Group Ltd., are cramming high-end functionality into cheaper devices that also run Android. And these devices are now selling fast in the developing world even as the market for high-end smartphones is reaching a saturation point in the West – putting pressure on Samsung, the market leader, which has seen profit pinched and its share price sink.

On Tuesday, Samsung warned that it expected second-quarter profit to drop between 22.3 per cent and 26.5 per cent, which would be the third straight quarterly drop. The company forecast that profit would drop to $7.1-billion (U.S.) for the three months ended June. Analysts had expected roughly $8-billion.

"Samsung has depended on smartphones to act as the profit engine for the company, but the phones don't have the same luster," says Kevin Restivo, a European mobility analyst with research firm IDC in London. "There's no question the market has entered a different phase, has evolved – and part of that evolution is falling prices."

Over the past several years, Samsung's mobile phone unit has come to account for more than 75 per cent of the company's total profit. Western consumers kept upgrading to newer versions of its enormously popular Galaxy phones, while its cheaper devices – which were available in a number of price points – sold well in various African and Asian countries.

But now, that lucrative market for mid-tier devices has collapsed, says Chetan Sharma, a U.S. technology consultant who has worked with Samsung, China Mobile and AT&T. Consumers, particularly in emerging markets, are choosing either low-end or high-end devices, and no longer want to spend $400 on a device that is far more expensive than cheaper devices with similar features, but doesn't have as much cachet as an Apple iPhone, he says.

"Samsung has benefited tremendously from their brand in emerging markets, but competitors are coming up with products that look similar," Mr. Sharma says. "And so a consumer that wants to own a $100 phone that looks like a galaxy and walks like a Galaxy – there's a number of those coming into the market."

And although Mr. Sharma says Samsung would not be surprised by what's happening, he says profit margins are a natural victim of the trends that are now sweeping through the market. "Samsung can probably push a bunch of low-end devices, but their margins will get crushed," Mr. Sharma adds.

Xiaomi, a Chinese manufacturer, has become a particularly fierce challenger to Samsung in the crucial Chinese market, producing sleek, touchscreen phones that run Android – but retail for a fraction of the cost of a Samsung, and sometimes have better battery life. The Beijing-based company is also expanding. In mid-July, it will launch the Mi3, a phone that is almost identical to Samsung's Galaxy S4, but will sell for roughly half the price – about $250. But across China, phones from companies such as ZTE Corp. sell for much less than that, around $100 or less.

But even in lucrative markets for high-end phones, such as the United States, analysts say the explosive smartphone growth of a couple of years has dissipated.

"It's a very mature market at this point," says Charles Golvin, with Abelian Research. "That same growth just isn't there. And most of the high volume sales are coming from the places where Xiaomi are competing – or even at the lower end: companies like ZTE and less known Chinese brands." 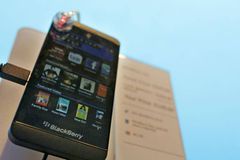