André Calantzopoulos is out to convince you he hates smoking. A former pack-a-day smoker for years, he preaches a harm-reduction approach to ridding the world of cigarettes. And he believes that new electronic alternatives can play a big role in getting Canada's four million remaining daily smokers to quit.

None of which would be terribly significant had Mr. Calantzopoulos not also sold 813 billion cigarettes last year alone. That's 1.5-million a minute.

As the chief executive of Philip Morris International Inc. – the world's largest listed tobacco company – he is an odd champion for the anti-smoking movement. It is an advocacy born of necessity.

Big Tobacco is at a crossroads. Around the world, the incidence of smoking is on the decline, while the market for vaporizers and e-cigarettes is growing at a frenzied pace. To try to capture some of that growth, Mr. Calantzopoulos has reoriented Philip Morris by sinking billions of dollars into developing a smokeless tobacco device the company says has the potential to convert smokers by the millions.

Shifting the company's focus away from cigarettes affords the opportunity for a brand makeover, to put some distance between the Philip Morris of today and the sordid history of the tobacco business.

"I'm fully cognizant of the past. But I'm hoping we can get more constructive," Mr. Calantzopoulos said in recent interview in Toronto. "Our overall objective is to achieve a smoke-free future, as soon as possible."

Arguably, no company is better positioned to profit from that transformation than Philip Morris. Having built up a considerable lead in developing the next generation of tobacco products, the company is poised to reverse its long-term volume declines, double its earnings growth over the next decade, and increase its share of an $800-billion (U.S.) global market by more than one-third, according to one analyst report.

Its strategy hinges on a device called iQOS, which liberally borrows design and branding elements from Apple Inc. "This changes everything," reads the cover of Philip Morris's latest annual report, using the same tagline that supported the launch of the original iPhone.

Instead of burning tobacco, the device heats it to release nicotine and flavour in the form of a vapour, rather than smoke. A cross between an e-cigarette and a vaping product, iQOS falls in a category called "heat-not-burn" devices.

"The taste and nicotine delivery is much closer to cigarettes than what we could achieve before," Mr. Calantzopoulos said, intermittently puffing on his own iQOS. He was the device's first convert from conventional cigarettes. Since then, three million more around the world have made the switch and 8,000 more a day are doing likewise, he said.

"We believe it has the potential to change the trajectory of smoking," Wells Fargo analyst Bonnie Herzog wrote when iQOS was introduced last year. As it stands, that trajectory is mostly downward.

Particularly in developed countries, smoking rates continue to decline steadily. Daily and occasional smokers in Canada accounted for 17.7 per cent of the population older than the age of 12 in 2015, according to Statistics Canada. In 2000, that number was 26 per cent. On a global scale, there were about 5.8 trillion cigarettes sold worldwide in 2015. That volume is expected to fall to 4.7 trillion by 2025, according to Wells Fargo.

Not to say that making cigarettes is any less profitable. Addiction and brand loyalty make for a customer base that is not particularly sensitive to price increases. "Cigarette manufacturing in fact remains among the most lucrative business enterprises in all of human history," Stanford University history professor Robert Proctor recently wrote in the medical journal Tobacco Control. Last year, Philip Morris shipped 4.1 per cent fewer cigarettes than the year before, while its profits on the year rose by 12 per cent, after accounting for currency fluctuations.

Stock charts show little indication of an industry in decline. Since Philip Morris's international and U.S. operations were split in 2008, the former's stock has returned 14 per cent annually after factoring in dividend payments. And yet, raising prices in perpetuity to offset volume declines is not a sustainable strategy.

Plus, tobacco stocks are deeply vulnerable to the regulatory and legal environment. Scott Gottlieb, commissioner of the U.S. Food and Drug Administration (FDA), announced in July a plan to limit the allowable nicotine in cigarettes to render them "minimally or non-addictive." Within an hour of the announcement, about $60-billion in market capitalization was wiped out from Big Tobacco stocks. In 2015, a Quebec judge ordered three Canadian companies – Imperial Tobacco Canada Ltd., JTI-Macdonald Corp. and Rothmans Benson & Hedges Inc., which is wholly owned by Philip Morris International – to pay $15-billion (Canadian) in damages to smokers. The firms are appealing that ruling. Additional class-action lawsuits in Quebec, Ontario, British Columbia, and Nunavut, are seeking to recoup many billions in health-care costs tied to smoking. Additionally, the proposed Canadian legislation regulating vaping products and e-cigarettes also includes a provision for mandatory plain packaging for tobacco products.

What iQOS represents is a potential eventual exit strategy from the regulatory and legal morass. Mr. Calantzopoulos said the company has already invested $3-billion in research and development and clinical testing for the device, as well as other product "platforms." Another $1.7-billion has been spent or committed to new manufacturing facilities or converting existing factories. "We are going all-in with these products," Mr. Calantzopoulos said, exhaling his device's faint vapour into the air of the company's iQOS retail space on trendy Queen Street West in Toronto.

The development of iQOS has been supported by a public-relations offensive portraying Philip Morris as modern, progressive, innovative and aligned with public-health objectives. Last week, the company pledged $1-billion to establish a non-profit organization dedicated to fighting the scourge of smoking, which, according to the World Health Organization, kills six-million people a year. The Foundation for a Smoke-Free World is to be headed by Derek Yach, a former World Health Organization executive responsible for its global tobacco-control treaty.

"It's bringing them the credibility that they so crave," said Pippa Beck, senior policy analyst at the Non-Smokers' Rights Association, based in Toronto. "They're really trying to rebrand themselves as open, honest, good corporate citizens."

There is good reason to be skeptical of Philip Morris's commitment to making cigarettes a thing of the past, says Timothy Dewhirst, a marketing professor at the University of Guelph. Cigarettes still account for 90 per cent of the global tobacco market, and the vast majority of Philip Morris shipments. Globally, there are around 220 variants of the company's Marlboro brand, Mr. Dewhirst said. "That's an indication that they're still investing a considerable amount toward traditional cigarettes and marketing those heavily where it's permissible to do so."

The industry has not exactly earned the benefit of the doubt in making scientific and health claims, either. Much of a successful Quebec class-action lawsuit against the industry hinged on whether tobacco companies worked to deny the risks of smoking. "One of the most troubling aspects of the industry's conspiracy to deny the dangers inherent in the use of their products is its duplicitous use of scientific research," the judge wrote.

Mr. Calantzopoulos said he understands the skepticism. "Let's admit it, we have a credibility gap," he said. Which is why he said he's pushing for independent verification of what the company's research shows: That iQOS represents a dramatic reduction in the disease-causing toxins associated with traditional cigarettes, and that the device has been much more successful than other vaping products in converting smokers.

Last December, Philip Morris submitted its research to the FDA in applying to have iQOS recognized as a "Modified Risk Tobacco Product." Ms. Herzog said there is a "decent chance" of approval by the end of next year. The company will realistically be able to sell iQOS in the United States without a health claim by early next year, she said.

The company complains, however, that it doesn't have the same avenue in Canada to submit its data for government review. Bill S-5 is expected to allow for relative risk messaging for vaping products, but not tobacco products. And Health Canada said iQOS classifies as a tobacco product. Tobacco companies are severely restricted in what they can advertise, including claims that one product is safer than another. "Consumers should know if there is a better alternative than cigarettes," Mr. Calantzopoulos said.

The federal government has said it wants to see a reduction in smoking to less than 5 per cent of the Canadian population by 2035. "I think we can get there much faster," Mr. Calantzopoulos said. "Alternative products have a role to play."

"People need to keep an open mind," she said. "But at the same time we can't be naive, because we've been burned so many times by Philip Morris and the other Big Tobacco companies." 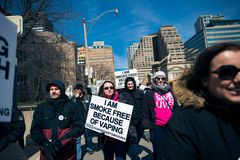