The global rail industry is defying the slumping economy.

Governments are investing heavily in public transportation in spite of the pressure to crunch their budgets in the age of austerity. And few companies are cashing in on the trend more than Bombardier Inc.

The Montreal aerospace company's rail division, one of the top three players in the global industry, is reporting rising sales even in the recession-stricken euro zone and enjoying a surge in North America, where a rail revival is under way.

Mr. Navarri said BT's order backlog stands at $31.9-billion (U.S.), the largest in the global industry, as cities become weary of favouring automobiles over rail. In car-mad North America, traditionally a slow market for any rail company, BT's order backlog hit $6.5-billion by mid-2012, up from $4.4-billion at the start of the year.

"Demand for passenger rail was scarcely affected by the recent economic downturn," and even the freight sector has recovered quickly, said a rail study by Roland Berger Strategy Consultants, published on the eve of the InnoTrans show for Unife, the European rail industry association.

Demand for rail equipment, infrastructure and services will rise by almost 20 per cent by 2017 to €170-billion ($216-billion Canadian) a year, the consultant said. That translates into a yearly growth rate of 2.6 per cent. As a result, the rail industry's growth has exceeded that of the world economy. Its share of global economic output has climbed to 0.38 per cent in 2010 from 0.31 per cent in 2004, Roland Berger said.

While Africa, the Middle East and Latin America are the fastest growing regions for Bombardier and it main rivals – Alstom SA of France and Germany's Siemens AG – Europe is proving surprisingly resilient, Mr. Navarri said. That's helping offset the slowdown in the once-thriving Chinese market. Chinese rail spending fell about 30 per cent in the first half of the year because of the sweeping corruption probe in the railways ministry and last year's high-speed rail crash, according to a PI Financial analysts' report.

Mr. Navarri said there is no doubt the European debt crisis and the recession in the 17-country euro zone has hurt growth, but has far from destroyed it. The European market is still expanding at 2 per cent or more a year, he said. "If you don't continue to grow the system, you will have paralyzed cities," he noted.

Raymond Bachant, president of Bombardier's North American rail division, said growth in the United States and Canada is being driven by cities that realize more roads are not the cure for urban congestion. Many are replacing trains, such as subway cars, that are more than 40 years old in some cases. "The price to overhaul an old car and build a new one are so close," he said.

In an effort to keep growth intact, Bombardier is pushing into new, and risky, markets.

One is Russia, which has not been welcoming to Bombardier. A few years ago, it gave up on attempts to build rolling stock for Russia's vast freight system – the world's biggest – with a Russian partner. As Bombardier retreated, Siemens and Alstom signed deals to supply rolling stock and high-speed trains to the Russian market.

Bombardier is taking another crack at Russia. It recently agreed to supply signaling equipment to Russian Railways, the state monopoly, and has signed a memorandum of understanding with UVZ, the state-owned rail car maker. If a joint venture emerges, Bombardier and UVZ would build metro cars and trams for Moscow and other cities. "Our target is to re-enter the Russian market," Mr. Navarri said.

Elevated monorail trains are another potential growth area for Bombardier.

The company has two monorail projects, which involve building tracks supported by concrete pillars about 10 metres above urban roads. One is in Riyadh, Saudi Arbia, where Bombardier is building a 3.6-kilometre system that will ring the new King Abdullah Financial District.

At 24-km long, Bombardier's monorail project in Sao Paolo, Brazil, is far more ambitious. Bombardier's share of the $1.4-billion (U.S.) project is about $800-million. When finished, its 378 train cars will be able to move more than 40,000 passengers an hour, making it the biggest such system in the world.

Monorails, however, are best suited to modern cities. They are unlikely to catch on in old European cities for aesthetic reasons.

Mr. Navarri reiterated BT's goal of achieving an 8 per cent profit margin – earnings before interest and taxes – next year, up from 7 per cent in 2011. But some analysts think the target date is ambitious. In an August report, National Bank Financial said "we believe that the company's 8 per cent EBIT margin target could be pushed out." 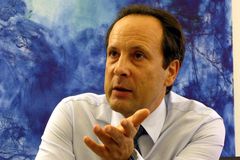 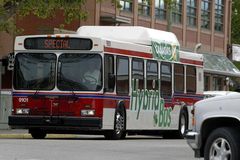 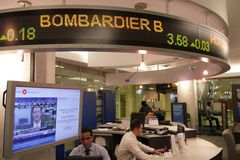