The inevitable arrival of increasingly powerful Chinese train companies in the European and global markets is one of the driving forces behind the upcoming initial public offering of Bombardier Transportation, giving it a currency that could be used to play the consolidation game, the company's president says.

Lutz Bertling, BT's president and chief operating officer since 2013, said BT will probably join the Frankfurt stock market late this year, though the listing could slip into early 2016, depending on market conditions. BT's parent, Bombardier Inc. of Montreal, is selling a minority stake, though Mr. Bertling would provide no details about its size.

"We intend to participate in the consolidation of the transportation industry," Mr. Bertling, who runs BT from Berlin, said on the sidelines of the biennial Union Internationale des Transports Publics (UITP) exhibition in Milan. "We want to increase our financial flexibility through the IPO. …We need to work on the right setup now to compete with the Chinese entering the market."

He said he expects the Chinese to arrive in Europe in the first half of the next decade, perhaps earlier, through the purchase of a European train company. But he insisted that BT would not consider a takeover offer from the Chinese or anyone else, in spite of the rumours to the contrary. "There is a clear, long-term interest [from Bombardier] in staying in the train business," he said. "If you look at the companies that were in the commercial aircraft business, and who did not have a second pillar, they all disappeared – McDonnell Douglas, Fairchild Dornier, Fokker."

The Chinese train industry is dominated by China CNR Corp. and CSR Corp., the two state-controlled companies that have agreed to merge. They are already the world's biggest train makers, measured by sales, and have a combined market value of more than $100-billion (U.S.). It was reported recently that CNR and CSR were in talks to buy a controlling stake in BT, though neither side confirmed that approaches to the Canadian train maker had been made.

Mr. Bertling said that that consolidation – mergers and acquisitions – would give BT access to markets and products that could make the company more competitive. "Know that [China] will become more important in the years to come; we need to make sure we have the right mix of products."

China alone isn't driving the IPO. Mr. Bertling said he believes that BT's value is not fully reflected in Bombardier's share price. "If you look at the overall company value on the [Toronto] Stock Exchange, it is likely below the value of BT," he said. "We want to crystallize that value, but this is very hard to do in North America because the [train industry] is not a business segment that is very attractive to investors there."

Bombardier shares closed Monday at $2.51 (Canadian) a share, down 40 per cent in six months. The share price has been damaged by the severe delays, cost overruns and poor sales of the new C Series commercial jet, which is making an appearance this month at the Paris air show. BT's IPO will provide Bombardier with a quick shot of liquidity at a time when the aerospace side is struggling.

BT is roughly the same size at Bombardier's aerospace division. In 2014, BT reported revenue of €7.2-billion ($10-billion), up from €6.6-billion in 2013. The order backlog climbed to €26.8-billion from €24.2-billion. At the end of last year, BT had a book-to-bill ratio – orders taken in over bills sent out – of 1.3, indicating rising demand. Last week, BT announced that it had won a €431-million order to supply 119 trams and a 24-year maintenance contract to the Vienna transportation authority.

In the three months to the end of March, BT reported earnings before interest and taxes (EBIT) of $118-million (U.S.), down 8 per cent from the year before, giving it a profit margin of 5.8 per cent, up from 5.6 per cent. BT's profit margin has been a waning in recent years as engineering costs rose to meet a burgeoning order book. Mr. Bertling said the margin goal is 8 per cent, an ambitious figure given that it has never been higher than 7.5 per cent in recent years.

He said BT has no plans to close factories to try to pump up the margin ahead of the IPO, "but you can never exclude adjusting your capacity."

BT expects the global train market to grow by 2.7 per cent a year over the next few years. The star segment will be urban transportation as cities try to get cars off the road. BT sees 3.6 per cent annual growth in the urban market.

Mr. Bertling would not say whether he thought high-speed rail would ever be built between Toronto and Montreal, though the idea has been floated for decades. "I would like not to anticipate the decisions of politicians," he said.

Why investors should avoid the Bombardier IPO train
Subscriber content
May 7, 2015 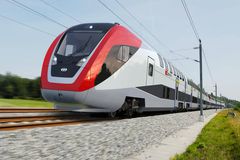 Will Canadian banks be bit players in Bombardier’s IPO?
Subscriber content
May 8, 2015 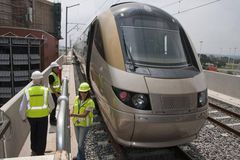