The news coming out of China is moving faster than the apparent getaway attempt by investors seeking relief from the markets, which are now in full-on crash mode. The Shanghai Composite Index, the country's largest stock exchange, was negative all day Wednesday as it closed down 5.9 per cent. The bigger number, however, is 32 – the Shanghai lost 32 per cent of its value since June 12.

A lot has been written about China's stocks, once the darling of the world economy for their impressive 150 per-cent gains over the year that now appear to have been artificially inflated due to stock purchases made on borrowed money. Now, these stocks are getting routed as the government plays its hand in trying to stem the rapid sell-off and stabilize the markets. Some say this is normal market correction, while others think it's much more deep-seated.

China's stock market: What stocks are up for grabs?

Investing in China isn't without its complexities. In China, there are three stock exchanges and three share classes that are separated by those listed in the mainland and those listed outside of it. Within the mainland, there are two stock exchanges – the Shanghai and the Shenzhen – that carry Class A shares, the standard common stock of mainland incorporated companies and the fastest growing share class in the country. These shares have been available to foreign investors, with restrictive quota limits, since 2002.

Class B shares are issued by companies that have also been incorporated in the mainland but are denominated in foreign currencies, such as U.S. dollars. Once restricted to foreign investors, they have been open to domestic investors with foreign-currency accounts since 2001.

Outside of the mainland lies the Hong Kong Exchange and its Class H shares. H shares are denominated in Hong Kong dollars that are freely purchasable by foreign investors.

Retail investors make up the majority of traders on the Shanghai and the Shenzhen exchanges.

On Nov. 17, 2014, the need for a channel that connected the Shanghai Stock Exchange and the Hong Kong Stock Exchange fostered the creation of a program called the Shanghai-Hong Kong Stock Connect, creating the world's second-largest stock market by market capitalization and trading turnover that allowed investors from either exchange to dabble in the other one relatively easily.

This overlap of exchanges effectively carried A shares from the mainland over to Hong Kong, with the effect of raising the value of H shares in Hong Kong.

According to Goldman Sachs, this program added more than 800 companies of $1-billion or greater market capitalization for foreign investors to trade in. The program, in effect, almost allows for the pooling of all of China's stocks for international investor consumption.

There are two quota programs that allow for foreign investment in China: the Qualified Foreign Institutional Investor (QFII) scheme and the Renminbi Qualified Foreign Institutional Investor (RQFII). Under the QFII program, introduced in 2002, non-residents could invest in renminbi-denominated assets – bonds, shares, mutual funds – up to $74.5-billion as of May.

The RQFII, established in 2011, allows qualified investors direct access to the Chinese capital markets using the renminbi currency. For example, qualified investors would purchase renminbi offshore and invest that renminbi directly into China. This year Canada was allocated a quota of $50-billion, according to David Oelke, head of treasury at the China Construction Bank in Toronto.

Bloomberg reported that in March, China raised the cap on foreign investing for Fidelity Investments Management (Hong Kong) Ltd. to $1.2-billion under the QFII program.

Quotas have been granted to asset managers, commercial banks, wealth and pension funds and securities companies.

Derek Holt, vice-president of economics at Bank of Nova Scotia, says the next step for China is including A shares in other foreign indexes, including the MSCI Emerging Markets Index next year.

These types of moves "would make Chinese equities more convertible and more accessible to foreigners," Mr. Holt says. He adds that a retail investor who has money in these kinds of indexes, should have an appetite for mainland China stocks.

Margin trading for the retail investor

The practice of margin trading has grown exponentially in China in recent months. Margin trading involves having an account with a brokerage firm that lends the account holder money on interest to buy securities. In other words, stocks in these accounts are purchased on money that the securities' owners don't have, making them more likely to sell in the event of a shock in the markets to cover their positions.

According to Oxford Economics, 86 per cent more margin trading accounts were opened in 2014, with 700,000 opened in December alone.

The government had a hand in feeding the bloated markets as much as it had a hand in trying to fix it. Beijing has, over the year, encouraged its citizens to invest in stocks when the property market sagged; so much so that the number of A-Share accounts opened since the beginning of the year shot straight up deep into the millions. To illustrate this point, Bloomberg reported that in a two-week period in February this year, the rally made by the markets attracted 2.8 million new equity accounts.

In April, China's Securities Depository and Clearing Co. Ltd. announced that it would allow mainland investors to open multiple A-share accounts, as opposed to just one per investor.

Then when things hit the fan, the government attempted to cut interest rates – monetary policy's pick-me-up for a slogging economy. For a while, some were worried about the hit demand would take if new companies were allowed to list on the exchanges, so regulators halted all new initial public offerings. Finally on the weekend, brokerage firms agreed to purchase $19-billion in stocks to counter the sell-off and prop up the market.

In response to the rout, over half of the all listed Chinese companies stopped trading on Wednesday. The securities regulator also banned shareholders in listed companies with shares of 5-per-cent or more from selling for six months. 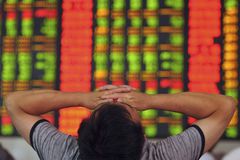 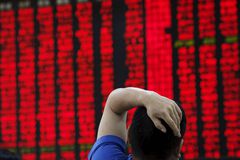 China stock panic no time to be a contrarian by buying metals
Subscriber content
July 8, 2015
Follow us on Twitter @globebusiness Opens in a new window
Report an error Editorial code of conduct