After strolling past Pakistani food stalls on the first floor of Hong Kong's ramshackle Chungking Mansions tower block, Dixon, a 32-year-old trader from West Africa, points to one of the bustling market's most popular products. "See, this one looks like a BlackBerry," he says, peering through a glass case at a white knockoff version of Research In Motion Ltd.'s signature smart phone. "That's why I love 'China phones.' People say they're sexy."

The fake BlackBerry is surrounded by dozens of other shanzhai, or "bandit phones." These cheap imitations of brand-name products, bearing names such as J-Max and Eurocell, are manufactured in mainland China and shipped in the hundreds of thousands across South Asia and Africa.

Much of the international wholesaling of shanzhai starts here at Chungking Mansions, a dilapidated 17-storey building in Hong Kong's otherwise-glitzy Tsim Sha Tsui neighbourhood. Outside, there's Rolex and Starbucks retail outlets, but within Chungking there's a constellation of cheap backpacker hostels, gem merchants, textile exporters and fake-phone traders. Local Chinese are generally horrified by the place, while some mainland Chinese joke that it has its own particularly hardy breed of cockroach

The trade in counterfeit "China phones" is putting pressure on handset makers such as Nokia that rely heavily on selling huge volumes of simple devices in emerging markets. According to KPMG, about one in 10 information technology products sold worldwide are counterfeit, a trade that costs the industry an estimated $100-billion in lost revenue annually.

Even high-end electronics are being targeted. A 2008 diplomatic cable from the U.S. Embassy in Beijing, released by Wikileaks this year, noted that, "Early evidence suggests nearly 100 per cent of Apple [Inc.]products in unauthorized mainland markets are knockoffs." (Apple has since hired a team to combat counterfeits in China.) In another of the cables released by Wikileaks, a Canadian consular official expressed concerns that China was failing to enforce a copyright on RIM's BlackBerry.

There are signs that the market for knockoff phones is dwindling among the middle and upper classes in China, who can now afford the cachet of the originals. Recent research by iSuppli notes the proportion of bandit phones shipped within China has dropped by more than half over the past year to 7 per cent. Even so, the technology of these counterfeit devices is improving. A shelf near the fake BlackBerry bears knock-off versions of Apple Inc.'s iPhone and iPad – as well as the not-so-subtle 'iRobot' – next to boxes containing copies of RIM's new PlayBook tablet and Samsung Electronics Co. Ltd.'s Galaxy Tab.

At the same time, the hot sellers inside Chungking Mansions offer a pretty accurate barometer of the global mobile market. "I'll tell you the facts, truly – Nokia's gone, Sony-Ericsson's gone, BlackBerry … the market for it is not so much," says Dixon, who did not want to give his last name. "[Companies]launch a phone in 2011, by the end of 2011 China has the same thing. Maybe, there's not too much quality. But in two years, China will make it quality … People demand what they want, and China is doing it."

Traders from Africa, such as Dixon, fly in, shop around the Chungking market for the best price, and then stuff suitcases full of thousands of phones and chargers. More experienced traders arrange for shipments of 10,000 to 30,000 devices at a time through the porous borders of Nigeria, India or Pakistan, where no one is on the lookout for fake goods.

Prices obviously depend on volume: Though a counterfeit iPad here may cost about $3,000 Hong Kong dollars (about $400 Canadian), ordering 5,000 iPads brings the cost per unit down to about $94 Canadian.

Many of the devices are decked out with flashing lights and loud rings, but others are more nuanced. On Shenzhen's subway, almost everybody appears to be using an iPhone, but closer inspection reveals some subtle differences.

In the second quarter of 2011, more than 37 million basic cellphones and 14 million smart phones were shipped in China, compared with 42 million and seven million, respectively, the previous year, according to analyst Kevin Restivo, who tracks global phone shipments for IDC.

Estimates of the number of shanzhai flooding the market are more difficult to come by, but Gordon Mathews, a professor at the Chinese University of Hong Kong, made some calculations while researching his book about Chungking Mansions, Ghetto at the Center of the World.

Based on conversations with stall owners, Prof. Mathews suggests the building's roughly 90 cellphone traders sell 18,000 devices a month on average, for a total of about 1.62 million phones, or nearly 20 million a year.

Prof. Mathews says mobile phone companies aren't particularly concerned about traders here, since price differentials are huge: Few buying a fake Nokia can afford a real Nokia, he says. But despite a rather drastic falloff during the global downturn of 2008, trade has largely returned to normal at Chungking Mansions. "My sense is that it indeed is as big as it ever was." 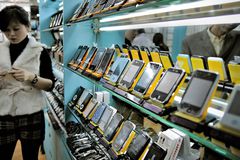 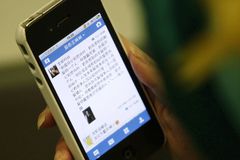 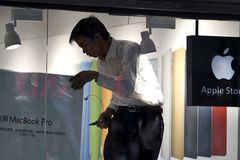 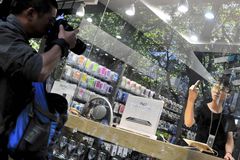