It may seem like unsurprising advice, but it's causing waves in the world of corporate banking.

Deutsche Bank senior executive Colin Fan, a Canadian based in London, has become an Internet sensation with a blunt internal staff video telling his traders and investment bankers not to be "boastful, indiscreet and vulgar" and warning that he has "lost patience" with their communications style.

The video, shared widely on social media Friday, takes aim at the famously crass culture on trading floors – most recently highlighted in The Wolf of Wall Street movie – and is part of a broader campaign to change the corporate culture at scandal-plagued Deutsche Bank, which has faced major penalties in recent years for improper trading practices.

Mr. Fan warns in the video that all e-mails and conversations are open to scrutiny when regulators are investigating a case of suspected wrongdoing and said "communications that run even a small risk of being seen as unprofessional" must stop "right now."

"Some of you are falling way short of our established standards," Mr. Fan says in the video. "Let's be clear: Our reputation is everything. Being boastful, indiscreet and vulgar is not okay. It will have serious consequences for your career, and I have lost patience on this issue."

A Deutsche Bank spokeswoman said Friday the company had no comment on the reaction to the video, but provided a written statement saying it is part of a firm-wide campaign to shift the bank's culture.

"A new culture is taking hold, step by step, here at Deutsche Bank," the statement said. "The substance and tone of this video is intentionally direct and part of an ongoing program. We expect every employee to understand and comply with our standards."

Mr. Fan, 41, is co-head of Deutsche Bank's corporate banking and securities operation, overseeing trading and sales. He is also touted as a possible future CEO of the German-based company.

He was born in Canada, and educated at Harvard, where he focused on science and history. In early days he wanted to be a doctor, he once told an interviewer, but gave up the plan after interning with a cardiologist. Instead, he turned to Wall Street and worked at Merrill Lynch and UBS before joining Deutsche Bank as a trader in 1998.

Mr. Fan's warnings are far from controversial, says Toronto employment lawyer Stuart Rudner from Rudner MacDonald LLP. He said employers are "well within their rights" to establish standards of conduct in their workplace, including rules restricting the use of profanity.

"When I work with employers, I tell them that if there is any behaviour that they want to encourage or discourage, they should set that out in writing so that the rules are clear," he said.

Otherwise, Mr. Rudner said, there may be ambiguity, and employees are left in a difficult situation where they do not know what is expected of them.

The warning to change communications style at Deutsche Bank comes as indiscreet and boastful e-mails have become a staple of securities cases involving brokerage firms in recent years. Many U.S. investment banks have banned swearing in e-mails in recent years as a result.

Former Goldman Sachs trader Fabrice Tourre was found guilty of fraud last year over a mortgage deal related to the subprime mortgage meltdown after the jury was shown a series of damning e-mails, including one in which Mr. Tourre bragged of selling bad bonds "to widows and orphans."

A damaging e-mail trail has also been used by regulators in the Libor scandal, which involved alleged manipulation of the London interbank lending rate by Deutsche Bank and other firms. In one e-mail, a derivatives broker seeking help from another on a trade says, "I'll buy you a Ferrari next year."

Deutsche Bank has paid almost $7-billion in penalties since 2012 relating to regulatory investigations, and remains under investigation for its role in the global Libor case. 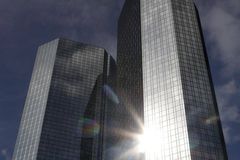