Both sides in the Brexit debate owe it to their fellow Britons to stop exaggerating the benefits and risks of leaving or staying in the European Union, says Mervyn King, former governor of the Bank of England.

What people need – and aren't getting – is enough information to make an informed decision, Lord King said in an interview Monday. "What they've been given are assertions. They don't want to be told what to do. They'd like to make up their own minds."

Lord King refuses to take sides in the referendum June 23 on whether Britain should leave the European Union or remain a member of the world's largest trading bloc.

"Anything I say on Brexit – no matter where I say it – will be put in front of Mark Carney [his successor] and he will be asked to respond. That makes life very difficult for him. So I've stayed out of the debate,"

But he doesn't hesitate to voice his unhappiness with the early tenor of the rancorous debate, which he likens to a public relations campaign.

"It's unfortunate that the two sides seem to think that it is absolutely black and white. One side says if we were to leave the EU, Britain would suddenly become a land of milk and honey. And the other side says no, Britain would be a land of locusts and plagues. This is a wild exaggeration on both sides."

It would be better, he said, if they acknowledged that their opponents have some good arguments and explain why, on balance, they favour one option over the other. "What's needed is a much more reasoned debate about where the future of the U.K. lies. We're not really getting that."

Lord King was in Toronto for public appearances related to his new book, The End of Alchemy: Money, Banking and the Future of the Global Economy.

Unlike the Brexit issue, he is much less reticent about discussing the future of the euro zone, which he regards as bleak.

The eventual choice for the 19 members comes down to an anti-democratic transfer of political sovereignty to a single government or the breakup of the currency union, he writes in his book.

"The tragedy of monetary union in Europe is not that it might collapse but that, given the degree of political commitment among the leaders … it might continue."

That, he said, would ensure economic stagnation for the bloc and impede the recovery of the global economy.

Washington's position that Germany and other euro-zone governments should do whatever is necessary to keep the euro going is "a serious misjudgment," Lord King said in the interview.

"The only people who can decide whether Germany should pay in the long run [through transfer payments to keep Greece and other fiscally challenged countries afloat] have to be the voters in the member countries. It cannot be for the United States to say ... you've got to keep the show on the road."

"It would mean taking away from the people of Europe the power to determine their own governments and hence decisions to tax and spend."

Meanwhile, those politicians and officials who support the idea of transfer payments to keep the euro dream alive are "seriously underestimating the scale of the transfers that will be needed. The scale of the problems at the end of this will be all the greater because they've kept it going for so long."

If Britain votes to leave the European Union, London's dominant position as the pre-eminent global financial centre in its time zone would be placed under threat and other EU centres would seek to rip away business, British cabinet minister Jo Johnson said.

London dominates the $5.3-trillion-a-day global foreign exchange market and is by far the most important financial centre in the European Union, vying with New York for the title of the world's financial capital.

Some financiers say a British exit would sap London's wealth, hammer sterling,undermine the world's fifth-largest economy andprompt some traders to move their business to other centres such as New York and Singapore.

Mr. Johnson, whose older brother Boris is the most prominent member of the "Out" campaign, said a vote to leave could hurt sterling, affect interest rates and sap the dynamism that has made London the dominant EU centre for financial services.

"There is a real possibility that London, having established itself as the pre-eminent European financial centre, decides to let Paris and Frankfurt back into the game," said Mr. Johnson, Minister of State for Universities and Science.

"We have positioned ourselves now in a position where it is between London and New York, and potential future centers in Asia," Mr. Johnson said. "We would suddenly be putting all that at risk and preoccupying ourselves with a fight for pre-eminence again within Europe."

Since British exchange controls were scrapped in 1979, London has thrived as a centre for everything from foreign exchange and bonds to derivatives and fund management, making it the largest net exporter of financial services in the world.

London accounts for 41 per cent of global foreign exchange turnover, more than double the nearest competitor, New York, according to the Bank for International Settlements. 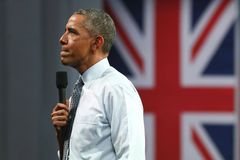