A roller-coaster day in Brussels wound down with the broad view that Greece was within reach of deal with its creditors that would stave off the country's insolvency and preserve its membership in the euro zone.

What was not known on Monday night was whether the deal, if reached later this week, would put Greece on a sustainable economic and financial footing or merely buy it time – a kick-the-can-down-the-road fix – before a new crisis hits.

But the mood definitely turned positive in Brussels late in the day, only hours after several euro zone finance ministers and government leaders said it seemed unlikely that a breakthrough was imminent.

"I'm of the opinion that we'll achieve an agreement with Greece this week," European Commission President Jean-Claude Juncker told journalists after meeting Greek Prime Minister Alexis Tsipras. "This won't be easy, we will work at this, just like we did over the last two days and nights. But my goal still is that by the end of the week we'll find an agreement."

Greek Economy Minister Giorgos Stathakis told the BBC that he considered the deadlock over with the country's creditors after five months of failed negotiations. He said that he expected the euro zone leaders, who were meeting in Brussels Monday evening, to issue a "very positive communiqué" about the likelihood of a reaching a deal this week.

Based on the few details that emerged after a meeting in Brussels of the euro zone finance ministers, it appeared that that one issue that is crucial to Greece's future health – a commitment to write off a substantial portion of Greece's crushing debt – would not be included in agreement this week, even if the idea has been bandied about for months.

"A debt haircut does not seem to be in the cards, meaning this may prove to be only a temporary fix," said Neil MacKinnon, managing director of research in London for VTB Capital. "Greece is stuck in a debt trap."

Greece's debt-to-gross domestic product, at about 180 per cent, is by far the highest in Europe. Greece's negotiating team has been arguing for months that creditors' demands for more austerity in exchange for fresh bailout loans would smother growth, making it impossible for the country to pay off its debt. As GDP sink, relative debt goes up.

Greece had little negotiating room in recent days. It was under the gun to produce an austerity and reform proposal acceptable to its creditors this week because its banks were in danger of collapse and the International Monetary Fund was insisting that it would accept no delay in a debt payment of €1.6-billion ($2.2-billion) due on June 30. The Greek government has said that, minus a deal that would release €7.2-billion in funds left over from the current bailout program, the IMF payment would go missing.

On Monday, the European Central Bank raised the ceiling on the emergency funds it would make available to Greece's four main commercial banks by €2-billion. The banks' deposit base has been shrinking at an alarming rate as customers fear a bank collapse. The German and Irish finance ministers reportedly pushed for a cap on emergency bank loans unless capital controls were imposed on the Greek banks, as they were on the Cypriot banks two years ago.

In the BBC interview, Mr. Stathakis said the Greek government offered to impose new taxes on corporations and on the wealthy. But he called the pension cuts demanded by the Greece's creditors – the ECB, the IMF and the European Union – a "red line" that would not be crossed.

The value-added tax will be increased, though it wasn't immediately clear whether the higher rate would apply to electricity prices. The Greek government said its proposals included eliminating the option for early retirement.

While there was no guarantee that a deal could be signed this week – or ever – investors took the view that the worst was over. Their fear was that a Greek default and exit from the euro zone would unleash contagion that would rattle the market throughout Europe and introduce heightened levels of political risk by making mockery of the ECB's promise that the euro was "irreversible." 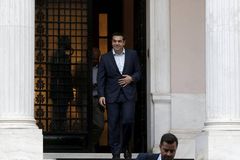