Europe's brief respite from political and financial turmoil has come to an abrupt halt in the wake of a nerve-rattling Italian election, Britain's loss of its cherished triple-A credit rating and troubling developments on other fronts.

The upshot is renewed unease about Europe's still unresolved debt crisis that is once again casting dark shadows over stock, bond and currency markets.

On Monday, the euro fell to its lowest level against the U.S. dollar in six weeks, but strengthened slightly against the British pound, which was shaken by the credit downgrade announced late Friday by Moody's Investors Service. The Standard & Poor's 500 index lost more ground in a single session that at any time since November. Italian bonds plunged and German bonds and U.S. Treasuries rallied, as nervous investors once again looked for safer harbours.

The result rocked global markets with fears of a new euro-zone crisis. Europe's common currency slumped against the dollar and yen and U.S. stocks suffered their biggest one-day drop since November.

It comes at a time when the economy of the European Union as a whole is stagnating and much of the 17-country euro zone remains mired in recession.

But Europe appeared to have the worst of the financial crisis behind it, because of the European Central Bank's vow last summer to do whatever was necessary to safeguard the euro.

Those measures included the potential purchase of unlimited quantities of sovereign bonds. Other positives proffered: improving economic and deficit numbers from Greece; new measures to bolster European banks; the first moves toward fiscal consolidation; and the commitments of Spain and Italy to tough reforms.

Any flareup is ill-timed and threatens to undo the efforts to restore economic and financial stability and placate bond investors, who have the capacity to make life unbearable for governments that fail to rein in their deficits. The future of the euro zone depends on keeping Italy, the euro zone's third-largest economy, and No. 4 Spain on the path toward responsible fiscal management – a task that has just become substantially more difficult.

EU officials have to be dismayed by the electoral muscle displayed by anti-austerity parties in Italy on the right and left, reflecting continuing public outrage over deficit-reducing measures imposed by the emergency caretaker government of economist and political neophyte Mario Monti. The moves, including higher taxes and public service cuts, appeased Italy's euro zone partners and global bond investors, reducing government borrowing costs and helping to stabilize the common currency. But the economy fell into a deepening hole, incomes plunged, unemployment worsened and voters took out their anger at the polls. Mr. Monti's centrist civic movement won only about 10 per cent of the vote.

In Spain, a major real estate company, Reyal Urbis, collapsed last week, leaving already battered banks on the hook for millions of euros in losses. Meanwhile, the government faces a corruption scandal and a steady stream of anti-austerity demonstrations. Thousands of people took to the streets again on Saturday, protesting deep cuts to health and other services, as well as hefty bank bailouts.

Life is no better in a large swath of the broader EU. In Britain, Moody's cited the continuing economic weakness and the resulting risks to the government's tight fiscal policy for its rating cut. In Bulgaria, where the government fell last week and the economy is in a shambles, rightists who joined mass demonstrations across the country burned a European Union flag and waved anti-EU banners. Other austerity-minded governments in the EU face similar murky political futures. 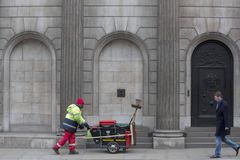 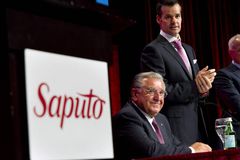 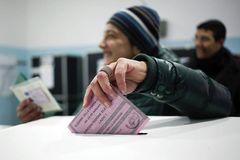