On the edge of Barcelona's medieval quarter, near the port that welcomed Christopher Columbus home from his first voyage to the Americas, lies a densely populated area whose contrasts are striking: It vibrates with energy, diversity and communal support, while stricken by crushing unemployment, homelessness and street gangs.

On one short block alone in El Raval, the storefronts include the Centre Cultural de Bangladesh, a Spanish hardware shop, Gastro Bar Africa, the Maharaja Restaurant and a second-hand appliance shop where fridges cost as little as €50.

But with one of the highest regional jobless rates in the Western world, there's a sense of desperation and hopelessness.

While no official figures are available, local merchants say the unemployment figure in El Raval ranges from 50 per cent to 70 per cent. The numbers are credible, given Spain's national unemployment rate of 25 per cent, the highest among Western nations. Youth unemployment is a crippling 54 per cent, and both numbers are rising as the Spanish economy contracts and the euro zone lands in double-dip recession.

Spain, socially speaking, has been calmer than some other countries even as 3.2 million jobs have disappeared since 2007, when the housing market peaked, then crashed with devastating impact. It has not seen riots as violent as those that have torn apart Athens, most recently last February, when about 40 buildings in the centre were heavily damaged or gutted when mass demonstrations turned ugly.

But Spain may be on the verge of a greater labour upheaval as job prospects disappear for a generation of young people. In September in Barcelona, more than 1 million protesters took to the streets to condemn the austerity measures that are deepening the recession (many were also there to call for Catalonian independence). On Nov. 14, another mass anti-austerity protest filled the city centre as part of the first co-ordinated, pan-European protests. In Madrid and in Lisbon, clashes with police left dozens injured.

Some economists fear Spain's – and Europe's – unemployed may be near the breaking point. In a recent note, Gilles Moec of Deutsche Bank warned that "the capacity of the 'core' of working age population to accept a combination of unpopular structural reforms and harsh fiscal retrenchment may be close to its limit."

In the heart of Barcelona, it is easy to forget that Spain is a miserable concoction of deep recession and soaring unemployment. The shops, cafés and restaurants are jammed with tourists and Catalans, bars are packed at 2 a.m.

Carolina Baras, the young sales manager of a funky handbag shop called Vaho, says business is picking up and she no longer fears losing her job.

"November started very well and we thought it would have started bad," she said, as shoppers snapped up colourful bags made of recycled material for €50 a pop.

Other parts of Barcelona are not so lucky. El Raval is a case in point.

One local resident, Harbilad Chumber, 51, created his own job when the booming construction industry that had employed him collapsed, putting him and millions of other unskilled and semi-skilled workers on the dole. He used his meagre savings to open an Internet and telecom shop, where calls can be made to India for 5 euro cents a minute. "In this area, there are three or four people to a room or small apartment," he said. "One of them works and gives money to the others. It's friendship, they all help each other."

Mr. Chumber, who is from Bangladesh, thinks 60 per cent or more of El Raval's residents have no work. "Some people here are going to Germany," he said.

The employment scene is so dire that thousands of people in El Raval have no place of their own. On a recent morning, the enclosed ATM area of La Caixa bank was full of elderly homeless people, who appeared to be Spanish, sleeping on cardboard mats.

Nearby, Cheick Conde, 40, from Guinea, was going through the contents of his supermarket cart that held his few possessions. He came to Barcelona eight years ago, worked as delivery man for the first four years and has had not a lick of work since then.

El Raval is full of gangs, he says, who have taken to petty crime, such as pick-pocketing tourists, to survive.

Mr. Conde sleeps in a communal lodging house. "You have to be out at 8 in the morning, and you can go back at 8," he said, speaking French. "I make no money at all. I'm sad because I came here to rebuild my life."

AFI, a financial consultancy based in Madrid, expects Spain's jobless rate to climb next year to 26.6 per cent as austerity measures kill off government jobs and the construction and housing industry remains in depression.

Throughout the euro zone, but especially in Spain, young workers are suffering the most. The young are easier to fire. In Spain, they are especially easy to let go because most are on temporary contracts, which give them virtually no job protection. Older workers tend to be on permanent contacts.

Rising Spanish youth unemployment (and falling employment) is proving disastrous not only for job seekers but for the economy itself. Deutsche Bank estimates that the lost generation of young workers has triggered a productivity crunch of 2 per cent in Spain, and a similar amount in Italy.

There is no doubt young people are growing frustrated in Spain as the downturn enters its fifth year. In a government employment agency in Barcelona, the lineups were long and hope was in short supply. "There are 6 million people looking for work in Spain," said Bibiana Perez Gasco, 31, who was waiting her turn to see an employment officer. "I look in bars, shops, supermarkets – nothing."

The question is whether Spain's millions of unemployed will get so angry that they will do what Greeks have done and paralyze their cities with endless mass protests that could turn violent. With job destruction in Spain outpacing Greece's, the surprise is that it has not happened already. 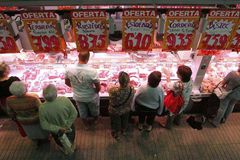 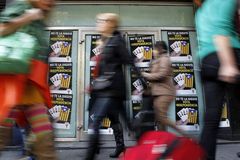 Anti-austerity anger spills onto streets in Europe
May 9, 2018 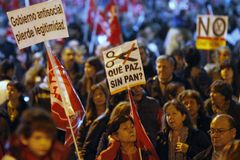 In euro zone, the return of recession bites like depression
May 9, 2018 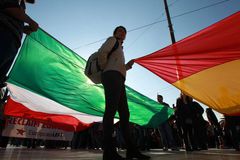 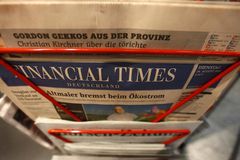 France to answer ratings downgrade with reforms
May 9, 2018 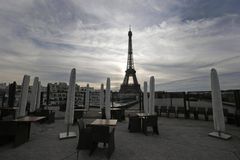