The European Court of Justice endorsed one of the European Central Bank's key crisis-fighting efforts – the purchases of sovereign bonds – just as the bank is preparing to launch a full quantitative easing program.

In an interim, non-binding opinion released Wednesday morning, Pedro Cruz Villalon, an ECJ advocate-general, said that the ECB's bond-buying program "in principle" adheres to European law. "The ECB must have broad discretion when framing and implementing the EU's monetary policy, and the courts must exercise a considerable degree of caution when reviewing the ECB's activity," he said.

The opinion marks a big victory for ECB president Mario Draghi, who has had to resort to so-called unconventional measures to keep the euro zone intact at the height of the financial crisis. If Mr. Vallalon's opinion had gone against the ECB, Mr. Draghi's ability to launch a quantitative easing program dominated by sovereign bond purchases might have come into doubt.

Mr. Vallalon's opinion came after the German Constitutional Court asked the ECJ to rule on the legality of the ECB's main crisis-fighting effort, called Outright Monetary Transactions, or OMT. Mr. Draghi introduced OMT in mid-2012, when the crisis was near its height and Greece was on the verge of leaving the euro zone. The program would see the ECB buy, in unlimited quantities, the sovereign bonds of any country that was having trouble financing itself and was in danger of getting shut out of the debt markets.

Although OMT was never used, its mere existence almost immediately took the edge off the crisis. In the following year, bond yields in the hardest-hit countries, including Spain and Italy, plummeted. The program was so successful that critics said it partly backfired, in the sense that it removed some pressure from national governments to reform their economies to make them more competitive.

But Germany's top court sought a ruling on OMT. It wanted to determine, among other things, whether OMT constituted direct government financing, which is beyond the ECB's mandate.

The interim opinion said that the OMT program is legal provided the ECB "refrains from any direct involvement in the financial assistance programs to which the OMT program is linked." OMT, in other words, must not involve direct government financing if it is to retain its monetary policy character. Also, any bond purchases must be done a market prices.

Economists expect the ECB to outline plans, or even launch, quantitative easing at its next policy meeting, on Jan. 22. The plan would see the bank expand its balance sheet by about €1-trillion through the purchase of bonds in an effort to fight deflation in the euro zone. Last month, consumer prices in the euro zone fell, year over year. Mr. Draghi's goal is to prevent a potentially damaging deflationary spiral, which might see consumers and businesses hold of purchases in the belief that prices will keep falling.

Some economists and strategists think any quantitative easing program will come too late, since inflation has been below 1 per cent, and declining, for more than a year. Falling oil prices could keep the decline intact.

In a note, Nicholas Spiro of London's Spiro Sovereign Strategy said, "Launching QE more than a year after the euro zone's inflation rate dipped below 1 per cent and when government bond yields are already at record lows is a case of slamming the stable door after the horse has bolted."

In spite of the ECJ ruling, the stock and commodity markets were down across Europe and the euro fell against the dollar.

The ECB sacrifices the euro’s value at the altar of deflation
Subscriber content
January 11, 2015 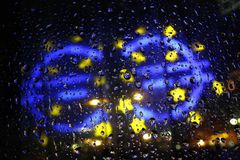 As deflation looms, aggressive QE may be too little, too late from ECB
January 7, 2015 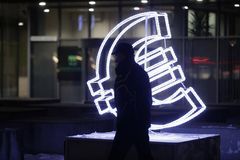