European leaders are considering a makeover of their banking sector that would prevent struggling financial institutions from causing more problems for their debt-burdened governments.

At the conclusion of G20 meetings in Los Cabos, Mexico, Tuesday, European leaders said they were entertaining the idea of a common bank supervisor, which would provide guarantees for bank depositors and oversee the wind-up of troubled banks across the region.

The goal would be to shield already debt-riddled governments, such as Greece, Spain and Italy, from potential bailouts needed in their banking sector. Such changes are needed to end the "feedback loop" caused when struggling banks turn to their governments for help, requiring more debt to stabilize the lender and prevent a run on the bank.

But the proposal, contained in a G20 draft communiqué circulated to reporters, came couched in the tentative, non-committal language European leaders have come to use often in recent months as they struggle to find consensus.

The communiqué included few details but said leaders would "consider" a unified approach to banking oversight.

The final wording of the pledges is clearly softer than what some leaders had called for.

It pledges that the euro zone will "consider" concrete measures such as more integrated banking oversight and deposit insurance.

Such talk has frustrated some members of the G20 who have called for more definitive steps from Europe.

The pledges come as the G20 tries to push ahead with new capital reforms designed to stabilize the industry that may be delayed by ongoing problems in Europe.

After talk in recent weeks that leaders might press for an easing of global banking reforms, given the problems in the euro zone, the global Financial Stability Board stated clearly Tuesday that it was pressing ahead.

The new rules, which require the world's banks to carry more capital on their books that can be easily liquidated in the event of a crisis, will not be watered down or delayed, Mark Carney, the Governor of the Bank of Canada and the head of the FSB, said in a letter Tuesday.

There had been speculation that capital rules would be delayed or eased to give struggling European banks more time to shore up their operations. Mr. Carney said delaying the new banking rules, which are not designed to be onerous, would do more harm to economic recovery than they would help the situation.

"Credit growth has resumed in those countries where financial institutions have decisively strengthened their balance sheets. Banks that have raised capital are reaping the benefits of greater access to and lower costs of market funding," he said.

While a European financial and banking union is widely viewed as a way out of Europe's unrelenting debt crisis, it remains unclear as to when it would become a reality – if ever.

The two-day G20 leaders summit opened Monday with a widespread sense of urgency. The head of the World Bank called it "an absolutely critical time."

And yet as the leaders jetted away from this Mexican seaside resort town Tuesday, it became clear Europe won't be rushed. Top European Union officials used the summit to argue that some of the promised reforms may take up to 10 years to implement.

The rhetoric about a sense of urgency in containing Europe's economic troubles shifts ahead 10 days to a meeting in Brussels.

That's where the European Council will meet and is expected that more detail in terms of specific measures and timelines for implementing them will emerge.

Prime Minister Stephen Harper, who has clearly irritated some in Europe with his repeated criticisms, said he was pleased with Tuesday's outcome.

"I'm convinced that European leaders fully understand what needs to be done," he told reporters. "The issue is now acting quickly and dramatically to actually take those steps."

On the debate over growth versus austerity, it appears growth won out. The language of the G20 coming out of Los Cabos stresses job creation, with less of a focus on debt and deficit reduction.

That suggests French President François Hollande won out over the pro-austerity views of German Chancellor Angela Merkel. Yet Mr. Hollande insisted the two central players of the euro zone will work together on a plan.

"Mrs. Merkel and I know that Europe must have its own response," he said on the sidelines of the G20. "It must not be given to us from the outside."

"They address all of the things that we know need to be done to fully rectify this problem," he said. "I think they also understand that the longer there's a failure to act comprehensively and dramatically on these measures, the greater the risk of ongoing lack of growth in the European area."

Supporting private sector, not civil service, will save Greece
June 19, 2012 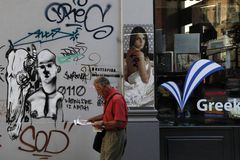 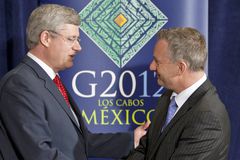 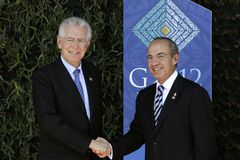