Like some Italian engineering and manufacturing companies, Gruppo AB has decided future expansion lies outside of its troubled home country.

Family-controlled AB recently made its first overseas foray by purchasing European Power Systems Ltd. (EPS) of Mississauga, a Canadian distributor of co-generation systems. With annual sales of about €180-million ($253-million), AB bills itself as the leader in co-generation machines, which simultaneously generate electricity and useful heat that can, for instance, warm buildings or make steam.

AB is expanding outside Italy because the domestic market is small but also as a sort of political and economic hedge. Italy is burdened with an unstable coalition government that could implode at any time and a deep recession that has sent unemployment soaring.

"I'm scared that political instability can bring us close to Greece," said Enzo Losito, 45, the president of AB's Canadian operations. "Either we change politically or the number of failures and bankruptcies will increase."

Italy's problems were highlighted again Thursday, when fresh economic data confirmed that its recession bled into the third quarter, marking nine consecutive quarters of contraction. Gross domestic product fell 0.1 per cent after a 0.3-per-cent slide in the second quarter. The only good news was that the pace of contraction slowed, suggesting the euro zone's third-largest economy might just emerge from recession in the last three months of the year.

The continent's two largest economies, Germany and France, released data Thursday showing their recoveries are faltering. Germany's gross domestic product rose only 0.3 per cent in the third quarter, in line with estimates, down from 0.7 per cent in the previous quarter.

France was a bigger disappointment. Its economy contracted by 0.1 per cent in the third quarter. The numbers come as a blow to President François Hollande, who faces extremely low popularity ratings and a tax revolt. Last week, France was downgraded by Standard & Poor's, the U.S. debt ratings agency, which cast doubt on the country's growth prospects.

The wider euro zone figures confirmed that the growth slowdown is well in place. The 17-country region expanded by a mere 0.1 per cent in the third quarter, down from the 0.3 per cent recorded in the previous quarter.

While the slowdown was expected, it comes as a blow to the countries that had hoped there would be enough fizz in the economy to add jobs. The euro zone's unemployment rate is a record 12.2 per cent. The youth unemployment rate in some countries, including Spain, Italy and Greece, is two to four times higher.

The disappointing growth figures came a day after the European Commission launched an inquiry into the massive trade and current account surpluses reported by Germany. The EC fears those surpluses are dampening growth and inflation in other European countries.

If France reports a contraction in the fourth quarter, it will be back in recession for the third time since the financial crisis of 2008. Economists generally define recessions as two successive quarters of GDP decline.

ING Groep said the French GDP figures confirm its view that France will report zero growth in 2013 after a year of stagnation in 2012.

"They also show that a recovery is not imminent: Private consumption will remain hampered by high unemployment while a strong export-led recovery will remain unlikely before further efforts are made to increase the country's attractiveness," ING economist Julien Manceaux said.

ING expects a French growth rate no higher than 1.1 per cent in 2014, a figure considered too weak to bring down its 11-per-cent unemployment rate quickly.

The French governmenti insisted the third-quarter contraction was not an indication of a downward trend. "We're at the moment where the economic machine is restarting," Finance Minister Pierre Moscovici said on RTL radio. "We knew the third quarter would be a pause. It's not a surprise, it's not an indication of decline.

France's grim GDP number was partly due to a 1-per-cent fall in manufacturing in the second quarter, after a 2-per-cent rise in the previous quarter. Investment fell 0.6 per cent, its seventh consecutive decline. Germany investment is on the rise. 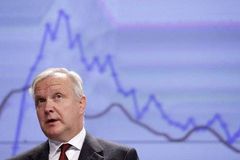