In Britain, they are known as the IPOD Generation – insecure, pressured, overtaxed and debt-ridden. In France, they are the Génération Précaire, young people whose best hope of starting a career is often a shaky temporary job.

Young Europeans have long contended with barriers that make landing secure employment more elusive than it was for their parents. Now, those taking their first steps into working life are doing so amid an economic crisis that has locked record numbers of them out of the job market.

As a result, more of Europe's young are slipping into the ranks of the long-term unemployed, a situation that threatens to produce lasting economic and social problems.

Pointing to recent protests and demonstrations in Italy, Spain, Greece and Britain, the International Labour Organization recently warned of the potential for a generation of youth that is, at best, disheartened about the future and, at worst, angry and violent.

"It grinds you down, it really does," said Barry Healy, 27, who's been unemployed since he was laid off by a Dublin media firm in 2008. "When you're not working, you're a non-entity, you're a statistic. You're not really a person, if you know what I mean. People look at you a bit differently."

In Europe, a record one in five under the age of 25 is out of work, though there are wide variations among countries. While youth unemployment is 9.1 per cent in Germany and 8 per cent in the Netherlands, it's 48 per cent in Spain, 43.5 per cent in Greece and more than 29 per cent in Italy and Ireland.

Young people are often hardest hit in a recession, as employers grow more cautious about adding new staff, particularly inexperienced newcomers. But even before the current crisis, which has left countries teetering under the weight of heavy austerity measures, Europe wasn't an easy place for young people starting out.

In many countries, the problem can be blamed in part on a surge in short-term temporary contracts that began in the early 1990s. In Europe's heavily regulated labour markets, short-term work allows firms to add or subtract workers according to fluctuations in demand, without costly benefits and severance packages. Young people, particularly in southern Europe, flooded into these uncertain roles with the hope that they would eventually lead to more secure permanent positions. By 2007, nearly 55 per cent of youth in France and Spain were on fixed-term contracts or employed by a temporary work agency, according to data from the Organization for Economic Co-operation and Development.

For some, these jobs were stepping stones into permanent employment. But for others, especially low-skilled youth, these dead-end contracts made them vulnerable in tough times.

"In a place like Spain, for example, people who have a permanent contract have a really permanent contract," said David Bell, an economist at Scotland's University of Stirling. "Then there's a whole bunch of workers on the edge, the temporary workers. This is where the young people are and they can be let go far more easily."

And they were let go in massive numbers.

Since 2007, nine out of every 10 jobs lost in Spain have been temporary positions. Employment in these jobs has fallen by one-third, compared with a 3-per-cent decline in permanent jobs. Meanwhile, the number of long-term unemployed (those out of work for more than 12 months) has doubled to 40 per cent of all jobless workers. The picture is no better in France, Italy and Germany, where more than one-third of those unemployed have been jobless for a year or more.

And these figures understate the problem, observers say, because they fail to account for young people who have given up. By mid-2010, 12.5 per cent, or 16.7 million, of young people in OECD countries were neither in school nor employment or training. Of these, only 6.7 million were seeking a job – the other 10 million had abandoned the search.

"Not only have young people failed to find a solid job or become unemployed, but a growing number of them are leaving the labour market altogether," said Stefano Scarpetta, head of employment analysis at the OECD. "Our concern is that while unemployment is a very big problem, to be long-term unemployed or inactive is an even bigger problem."

Three years after losing his job, Mr. Healy is still hunting, spending two hours each day trawling newspapers and employment websites. He has moved back into his parents' home outside Dublin and is collecting social welfare. Interviews, he jokes, are "like buses," they come all at once and then not at all. He interviewed for two public relations jobs last month. Before that, there had been nothing for four months.

"It's tougher each time. It gets harder to gather your confidence to sell yourself," he said. "If you've been knocked back a good few times you're kind of expecting the same again."

The longer a young person's jobless spell lasts, the more severe the consequences. Though Japan's "lost generation" of the 1990s is frequently cited as a cautionary tale of the prolonged effects of youth unemployment, Europe can draw from examples closer to home. Sweden's economic crisis in the early 1990s led to youth unemployment levels never before seen in the country of 9.3 million. Later dubbed the "Establishment Crisis" for its unusually damaging effect on young people entering the job market, it provides a stark example of the lingering impact of unemployment. Those out of work for three years during the crisis were six to seven times more likely to still be unemployed a decade later, according to a study by Lund University researcher Anna Angelin. Even those who were bumped out of the labour market for just a short time lagged behind their peers financially.

A separate study in Britain found that youth unemployment had a severe effect on future earnings. Those out of work for one year at age 22 incurred a wage "penalty" of 13 to 21 per cent 20 years later.

"We know that long-term unemployed will suffer from this experience long after it is finished," said Hilmar Schneider, director of labour policy at the Germany's IZA Institute. "It is something that has … long-term implications with regard to earnings and, of course, reduced chances in developing a career."

As the crisis wears on, jobless young people are also forced to compete for work with new cohorts graduating with fresher qualifications. The scenario proved disastrous for Japan's jobless youth in the nineties, who were largely passed over for employment by firms when the economy recovered.

"It is the same phenomena regardless of country," said Peter Waara, a sociologist at Sweden's Uppsala University. "If you are unemployed for a long period, you have a negative qualification compared to those who are entering after the crisis and don't have that history of being unemployed. That history can act as a stigma. All of these countries with large numbers of young people unemployed must be considering this."

The situation is less harrowing for countries such as Germany that tackled their youth unemployment challenges long before the economic turbulence began. Largely because of its apprenticeship programs, Germany has posted some of the lowest youth unemployment rates in the European Union for most of the past decade. Similar programs in Austria and the Netherlands have also had a positive impact on employment.

Establishing systems such as these, however, requires significant investment and extensive negotiations with employers, something Europe's cash-strapped countries may be unwilling or unable to fund. Similarly, opening labour markets and establishing training programs takes time and will likely come too late to help Europe's current batch of young jobless.

It would also place governments in a prickly situation with older workers, who tend to vote in greater numbers and who are already railing over austerity programs that include reduced benefits and delayed retirement ages.

"This will be a burden for those economies for decades. It's not only that you have a problem at the moment, it will have an echo in poverty claims and welfare claims for decades."

About 500,000 young people, or 60 per cent of all Germans leaving secondary school, enter the program each year. Apprenticeships last an average of three years and are available in 350 occupations, from plumbing and carpentry to hairdressing and film editing. Students spend most of their time learning on the job at private firms and the rest in the classroom. Companies pay them reduced salaries and help them earn certifications.

The system helps to reduce the impact of disincentives to hiring in uncertain times – such as government-mandated benefits and severance – by smoothing students' transition to the work force. Sixty per cent of young apprentices are offered full-time jobs by the firms that trained them. And within six months of completion, 80 per cent of apprentices find employment, according to Germany's Institute for Employment Research.

The program has its critics. Some believe students receive overly specialized training that ties them too tightly to individual industries. And when economic turbulence pushes revenue down, companies often take on fewer apprentices.

Still, at 9.1 per cent, Germany's youth unemployment rate is less than half the EU average. Though in most OECD countries youth joblessness is two to three times that of adults, unemployment among Germany's young people is just one and a half times the adult rate. Germany's ratio, the lowest in the group, is largely because of the success of its apprenticeship program, the OECD says. 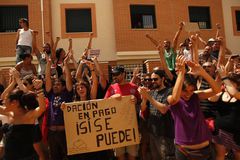 Tens of thousands march against Euro Pact in Spain
June 19, 2011 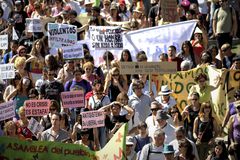