Canada's Gabriel Resources Ltd. is issuing a stern ultimatum to the Romanian government: Approve the Rosia Montana gold mine or face a lawsuit for billions of dollars.

The strategy marks a stunning reversal for the Toronto Stock Exchange-listed company, which until recently had expected the government would approve a draft law that would allow the $1-billion (U.S.) mining development in Romania's Transylvania to go ahead.

Then, on Monday, Romanian Prime Minister Victor Ponta said parliament would likely reject the draft law, a move that would kill Europe's largest gold project. Gabriel shares went into freefall. The same day, Gabriel said it would "assess all possible actions open to it, including the formal notification of its intentions to commence litigation for multiple breaches of international investment treaties."

On Wednesday, Gabriel chief executive officer Jonathan Henry vowed that the legal action would go ahead if the government does kill the mining project, and attached a big number to it.

"If the lower house [of parliament] does reject the project, we will go ahead with formal notification to commence litigation for multiple breaches of international investment treaties for up to $4-billion," Mr. Henry said in a phone interview. "Our case is very strong and we will make it very public that Romania's effort to attract foreign investment will suffer greatly."

Mr. Henry said he expected the government's upper house, the senate, on Tuesday to reject draft legislation that would allow the mine to open. But any decision, for or against, would not be binding unless the bill also goes to a vote in the much more powerful lower house, the chamber of deputies.

While Gabriel holds out some hope that the lower house will hold a serious debate that will result in a "yes" vote, Mr. Ponta suggested that it was game over for the Canadians.

Mr. Ponta noted that a majority of lawmakers oppose Gabriel's plan, which would reopen and greatly expand mines that were exploited by the Romans almost 2,000 years ago. "As long as it is obvious that there is a majority opposed to the bill, it is useless to waste too much time on it," he said.

His statement pushed down Gabriel shares by more than 50 per cent in a single trading session. On Wednesday, Gabriel rose about 15 per cent, to 75 cents (Canadian), reflecting some investors' belief that the ultimatum may work. Still, Gabriel shares have been a dismal investment. In 2010 and 2011, when Gabriel was confident that the project's approvals were imminent, the shares traded as high as $8.

Mr. Henry, an Irishman who joined the company three years ago, hinted he would step down if a lawsuit is launched against the Romanian government. "I am a mining CEO, not a litigant," he said.

In a note published Wednesday morning, Bank of Nova Scotia analyst Craig Johnston said "we wonder what the future will be for Romania if it does not follow its own process for evaluating a world-class project that meets European Union standards and asks for no exemptions from any laws."

The Rosia Montana project has been held up by well-organized and well-funded protesters, ranging from local farmers who do not want their properties seized to make way for the enormous mine to billionaires such as George Soros and celebrities such as Vanessa Redgrave, for about 15 years. Gabriel has spent $550-million (U.S.) and has gone through six CEOs since the company's launch in the mid-1990s. Five of those six failed to get the project approved, although a few of them were convinced they were on the verge of breakthroughs before giving up hope.

Gabriel has said the project will generate $24-billion to Romania's gross domestic product (based on a $1,200 an ounce gold price) and about 3,000 jobs over its 16-year mining life in a region that suffers from high unemployment and poverty.

"I fundamentally believe this project is the right project for the people of Rosia Montana," Mr. Henry said. "This is not just about shareholder value. … Without this project, Rosia Montana will die. People will leave. There are no jobs." 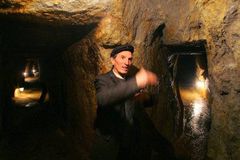